• spectacular Navcam panorama of the major geologic contact at this location

On sol 3425 Opportunity "waded ashore" at Solander Point after crossing a sea of sand between here and Cape York. Cape York was an "island" remnant of the rim of Endeavour crater that Opportunity left back in May. Since then it has been driving south to the next largest and mountainous remnant of the crater rim, Solander Point.  The sand surrounds the isolated remnants of the rim of Endeavour crater and both Cape York and Solander Point are small exposures of very ancient terrain nearly engulfed by the later sands of Merdiani Planum.

In the last few weeks we have been "sailing" northwest along the "east coast" of Solander Point looking at an odd escarpment along its east edge. But finally on September 13, Opportunity landed on the bed  rock of Solander Point. The rest of this week we have spent walking across the tip of Solander Point to get to  the bright outcrops on the west side.

This morning we arrived at that outcrop where Opportunity will spent the weekend doing detailed analysis before moving on. Current the solar power is getting less as late fall approaches on Mars. So Opportunity needs to start the climb along the ridge of Solander Point where the northerly slopes will yield more power and science activities may continue I the coming months.

The big goal is 200 meters south, but the terrain right here on sol 3431 is awesome. There are several geologic units that are overlapping here. And Opportunity is sitting on the contact. On the  east side of the contact are rocks maybe a billion years older than those on the west side of the contact. This sort of age progression is what geologic look for when trying to understand the past by reading the rocks. Opportunity is allowing us for the first time to do not only fundamental geographic exploration, but it is enabling on the ground  geologic study of past climatic history on Mars. You only get to do that once per planet. We are here. And we are doing it now, this weekend.

In this historic perspective you can see the "shoreline" where the younger, lighter toned sandstone laps up onto the low cliffs of much older bedrock on the "island" of Solander Point.THis Navcam panorama was rtken on September 12 just before Opportunity made "landfall". In the distnace in the background is the ridge line that Opportunity willbe climbing in the coming months.

Above is the Pancam panorama we acquired on sol 3375 when Opportunity was still approaching Solander Point. On it I have plotted the subsequent drives along the east side of the point, and the location on the contact as of September 18. The approximate places were we need to be by later this fall are shown here for anyone following along. It's a new unexplored land with new scenes. 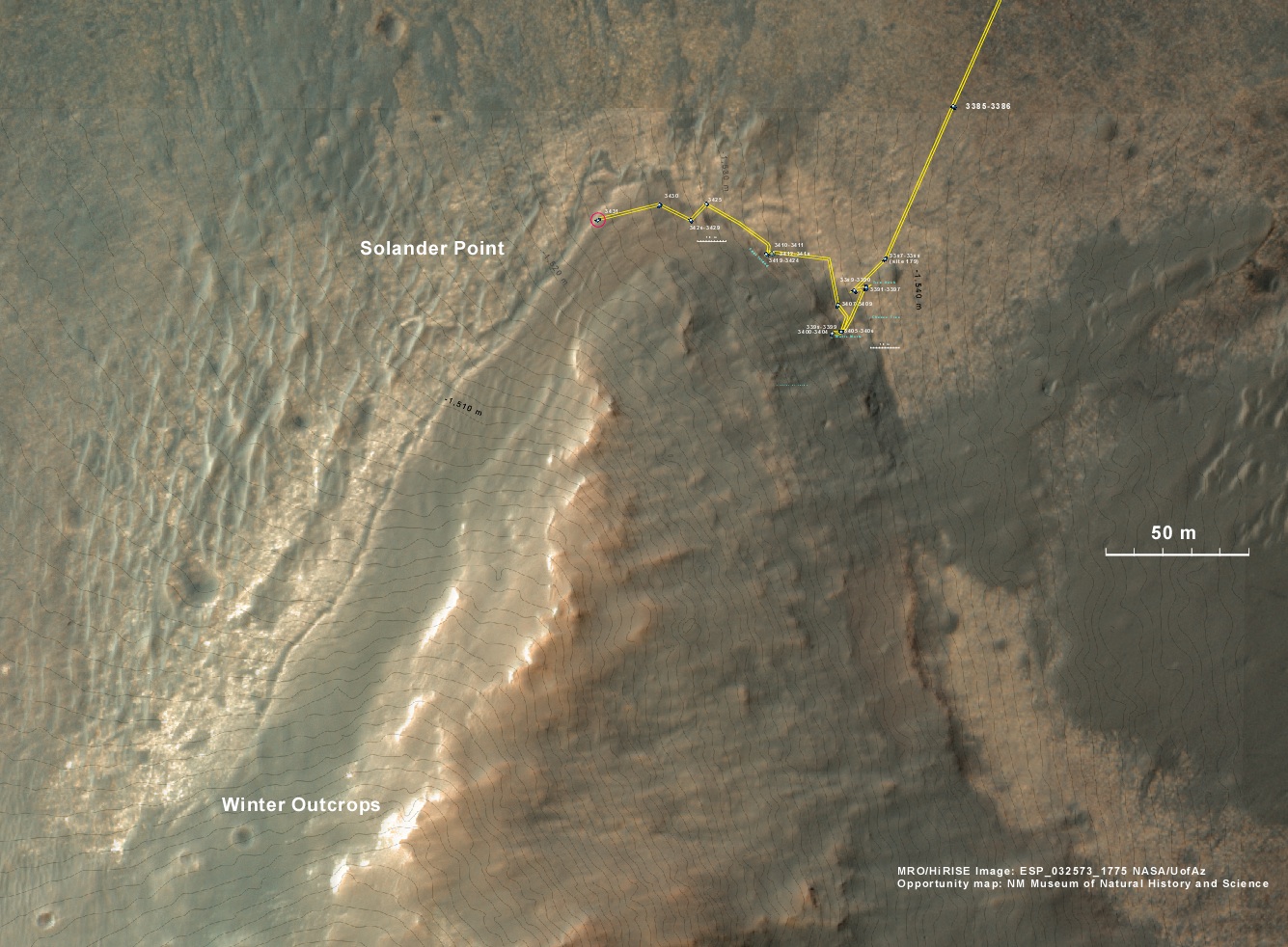 Above is the corresponding ovehead view using the Mars Reconnaissance Orbiter HiRISE camera view as a base. You can see how Opportunity has spent the last couple of sols walking across the very northernmost tip of Solander Point.

In the above Navcam panorama acquired on mid-morning on September 18 (sol 3431), you cab see the contact between the younger Burns Formation sulfate-rich sands on the right and the older rocks of Endeavour crater on the left. We will probably follow this contact for ways to the south before starting the climb next week.