Volcanoes are a significant part of the landscape of New Mexico and one of the characteristics that makes New Mexico special. Young volcanoes are abundant, which makes  New Mexico somewhat like a giant out door museum of volcanic features with exotic southwestern mesas and landscapes thrown in for visual relief.

New Mexico has the largest number, range of ages, diversity of types, and range of preservation of volcanoes in North American and many textbook  examples of the differing types of volcanoes.  The posters on this page illustrate a small part of New Mexico's  "volcano collection". 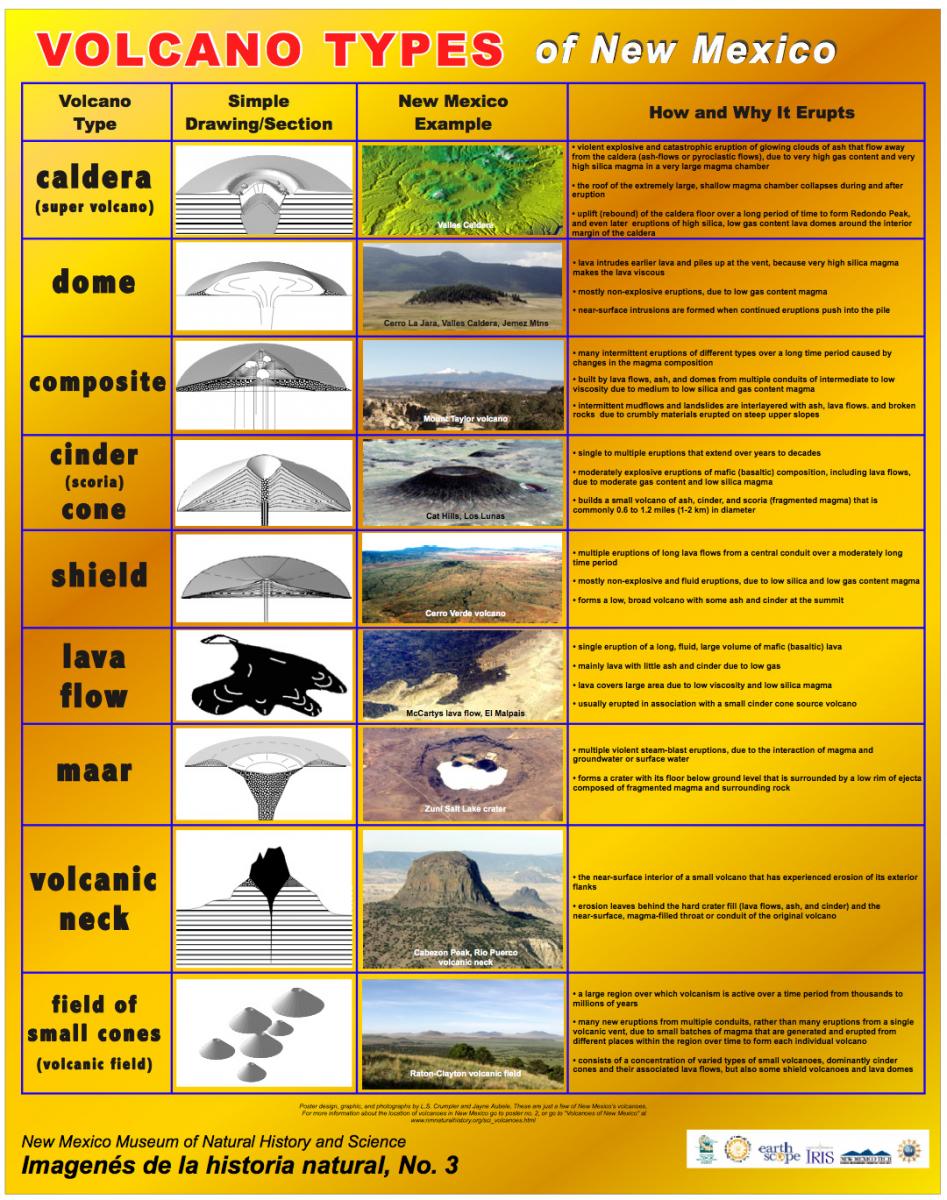 Will there be another eruption? The region remains tectonically active so continued volcanic eruptions separated by significant intervals (1000s of years) are likely. Volcanism in New Mexico is not "extinct," but is dormant. The record of volcanism in New Mexico is continuous over tens of millions of years, and there is no reason to think it stopped magically 3000 years ago with the eruption of several cubic kilometers of basalt (McCartys lava flow, El Malpais).

Why New Mexico is the "Land of Volcanoes"

Each of the Southwestern states can be categorized according to their apparent geologic specialty. Arizona is the big Canyon state, Utah is the Mesozoic fauna state, and Colorado is the big snow-capped Rocky Mountains state. So what then is New Mexico? New Mexicans need only look out their windows for the answer: New Mexico is the Volcano state or "Land of Volcanoes." New Mexico has one of the largest concentrations of young, well-exposed, and uneroded volcanoes on the continent. And as a bonus, it is also the Rift Valley state; it has one of only five or so big continental rifts in the world, East Africa being one of the other ones. This means that some of the best resources for study of the natural history of volcanoes occurs here in New Mexico.

Here are just a few facts to consider: 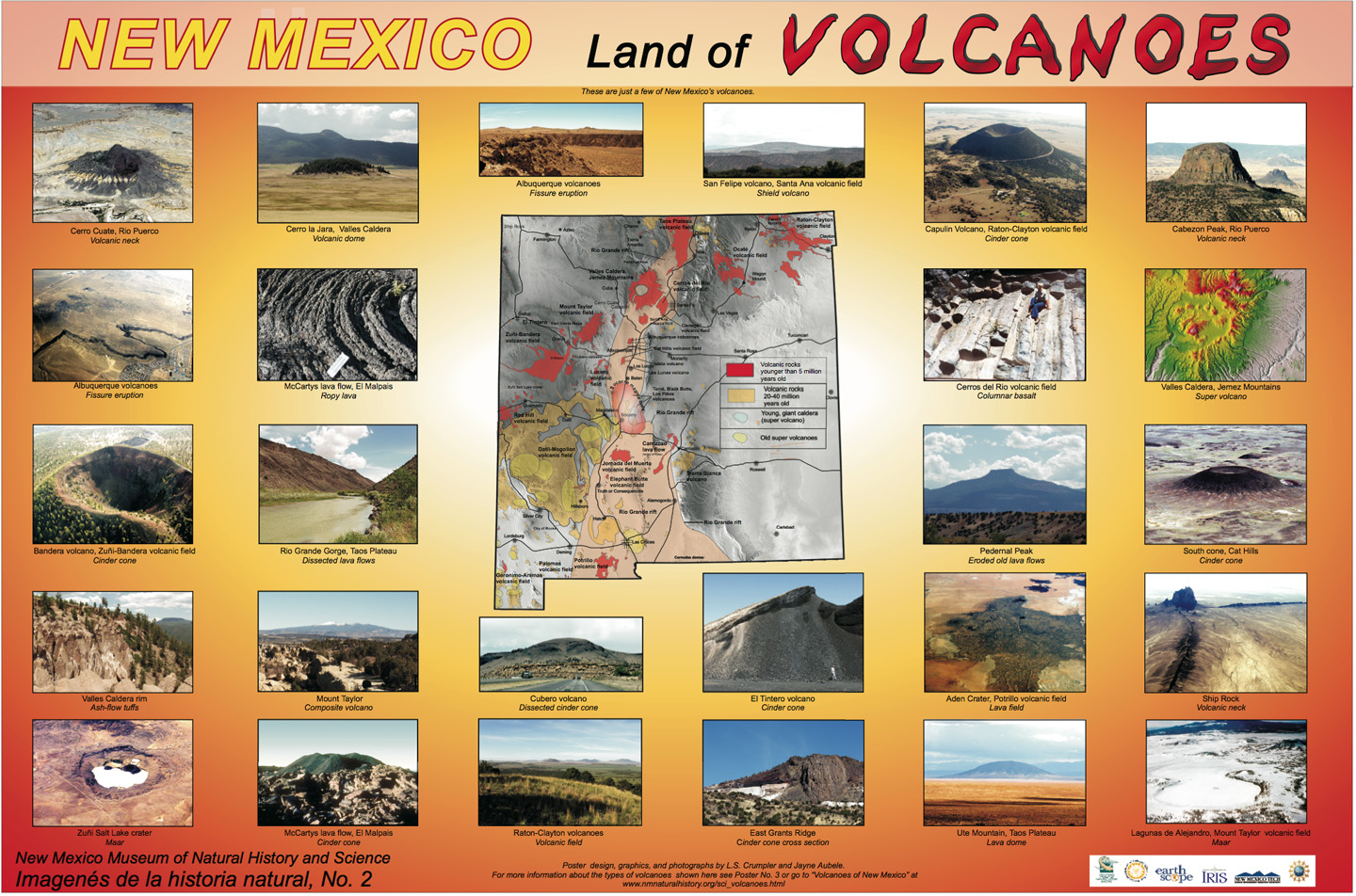 One of the three large mid-crustal active magma bodies in the continent occurs near Socorro, New Mexico . (The other occurrences are Long Valley, California and Yellowstone, Wyoming.) Oddly, the Socorro area is one of the few areas where there is a dearth of young volcanoes, so perhaps the rift is working on filling out its volcano landscaping.

Throughout the world most people are so far removed from any volcano that they must travel many days or fly in and out at great cost. In New Mexico, you can get up in the morning, eat breakfast at the kitchen table, put on your field clothes, and be standing on a world-class example of some volcanic feature by early morning; or you need only look out the window to see at least one of those world-class examples on the horizon; or in only a few minutes you can go stand on one of the best young examples of a fissure eruption (Albuquerque Volcanoes), a cluster of maar craters (Potrillo), or one of the largest young calderas of the supereruption-type in the world (Valles Caldera).

The climate of New Mexico favors preservation of volcanologic features. Whereas most of the volcanic areas on the continent are extensively "water-damaged," New Mexico is a giant air-conditioned museum of volcanic phenomena preservation. Even those volcanoes that are eroded are really only deeply cut, not weathered, and the surface features are still intact for examination. In New Mexico you may truly walk through the interior of many volcanoes and still examine their relatively uneroded surface features.

All of the principal types of volcanic landform (composite volcano, shield volcano, volcanic caldera, major ash-flows, pahoehoe and aa lava, maar crater, fissure eruptions, cinder cones) occur in New Mexico. Also consider the fact that volcanic phenomena tend to concentrate in two of the three types of plate boundaries (subduction zones, transform boundaries, and rifting boundaries. Transform boundaries, such as Southern California, tend not to have volcanoes. Subduction zones are the site of the big, explosive composite volcanoes, such as those around the Pacific Ring of Fire. Then there are rifting boundaries. The mid-ocean ridges, Iceland, and East Africa come to mind. But they are rare on dry land. New Mexico is one of those rare places.

Kilimanjaro may be more spectacular than Mount Taylor, or Hawaii more active than New Mexico, but those are just particularly big and hard-to-miss, and isolated, examples of volcanoes. In the final analysis, it is uniqueness and diversity that is really New Mexico's specialty, certainly in culture, but also in natural history. "Big" is not necessarily the point, nor is it always the best reference example. 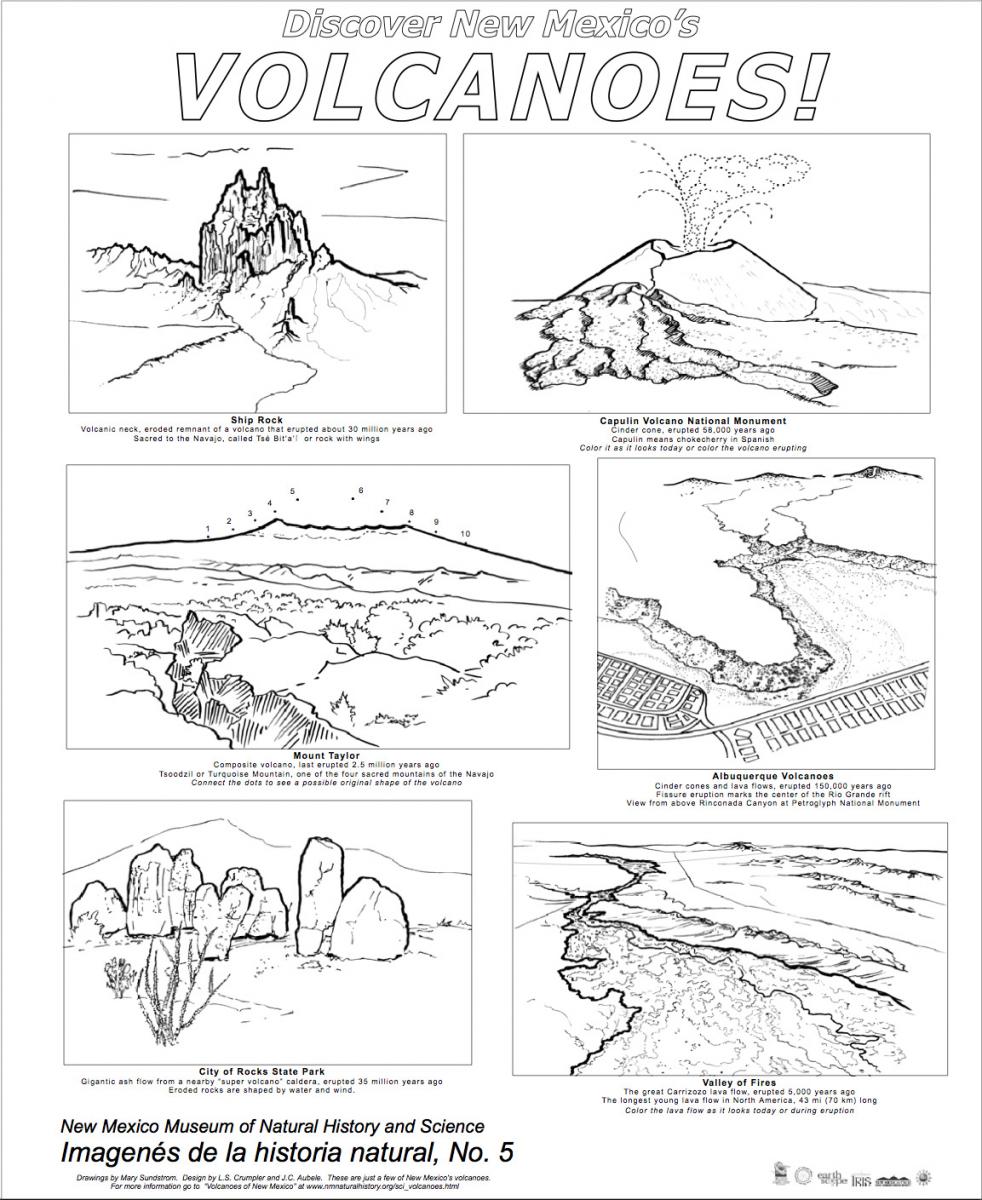