Western North America is famous for its dinosaur fossils. Many of these come from the San Juan Basin of northwestern New Mexico. Most of these specimens were collected in the early part of the 20th century and the resulting specimens were shipped to Museums far from New Mexi 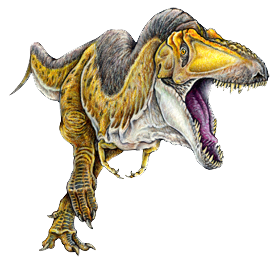 co. However, since the New Mexico Museum of Natural History and Science opened in 1986, newly discovered specimens have been found and kept within the state.

Dr. Thomas Williamson, Curator of Paleontology, has led a productive campaign to collect Late Cretaceous dinosaurs from the badlands of the San Juan Basin since 1994. In 1997, a volunteer researcher, Paul Sealey, found an interesting site during a weekend fossil exploration fieldtrip to the Bisti/De-na-zin Wilderness Area. Paul Sealey has a long history of working with Museum curators to recover fossils. Dr. Williamson had previously named a primitive relative of the alligator after Paul, Brachychampsa sealeyi, based on one of his earlier discoveries. 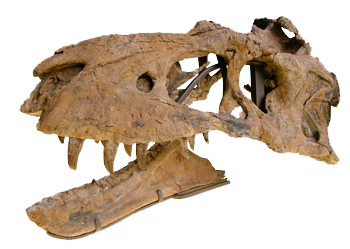 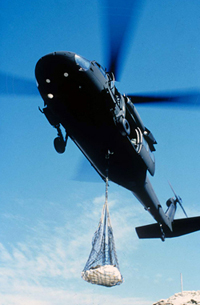 Dr. Williamson visited the new site and immediately realized that Paul Sealey had found a very rare and important fossil, the partial skeleton of a tyrannosaur, a member of the group of meat-eating dinosaurs that includes Tyrannosaurus rex. Williamson worked closely with the Bureau of Land Management to secure the necessary collecting permits. This was to be the first paleontological excavation to be allowed in a Federal Wilderness area. The permits were granted in 1998 and the dinosaur was excavated that summer. The site was in a rugged, but scenic area, far from any roads. All supplies were carried to the site by hand. Much of the excavation work was done by Museum Volunteers overseen by Dr. Williamson under harsh conditions. Volunteers had to endure high temperatures, voracious gnats, and hard physical labor. By summer’s end, large blocks of rock containing the dinosaur bones were wrapped safely in plaster covered packages, braced with wooden planks. The New Mexico Army National Guard volunteered to airlift the specimens on a calm and cool September morning as part of a training exercise. The heavy jackets were flown safely to a nearby flatbed trailor parked outside of the wilderness boundary and hauled down to the Museum’s fossil preparation lab in Albuquerque. 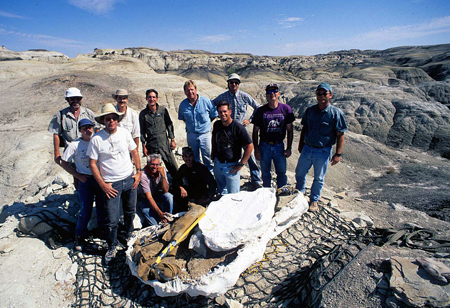 Group photo of Dr. Thomas Williamson (front row, standing in black t-shirt) with his crew with a field jacket containing portions of the holotype of Bistahieversor sealeyi in the Bisti/De-na-zin Wilderness Area of New Mexico (September, 1998). Photo by Ray Nelson.

The completeness of the new tyrannosaur specimen was revealed only after careful preparation. Much of the preparation was done by long-time Museum Volunteer Warren Slade. Additional preparation was also provided by Ian Morisson of the Royal Ontario Museum and Alex Downs of Ghost Ranch. Preparation of the skull was completed in about two years. Meanwhile, Dr. Williamson collaborated with a colleague, Dr. Thomas Carr (Carthage College), a renowned expert on tyrannosaur dinosaurs. Williamson and Carr obtained grants that supported travel to museums in the U.S. and Canada that contain many of the important tyrannosaur specimens. Together, they carefully analyzed specimens and compared them to New Mexico specimen and other less complete tyrannosaurs that had been collected from the state. Williamson and Carr soon realized that they had a new genus and species that helps to clarify much of the evolutionary history of tyrannosaurs.

Tyrannosaurs were the dominant large predator of Asia and North America through the Late Cretaceous, an interval of Earth History marked by high global sea levels and Hot House conditions. Most of North America experienced tropical conditions during this time and a shallow seaway flooded the interior of North America isolating eastern North America from the west for about 30 million years. Tyrannosaurs first appeared in North America near the time that this seaway developed. The origin of tyrannosaurs is uncertain, but recent discoveries of early primitive Asian tyrannosaurs offers compelling evidence that the group originated in Asia or Europe during the Jurassic Period from small-bodied ancestors only distantly related to the large meat-eating carnivorous dinosaurs that prevailed at that time. 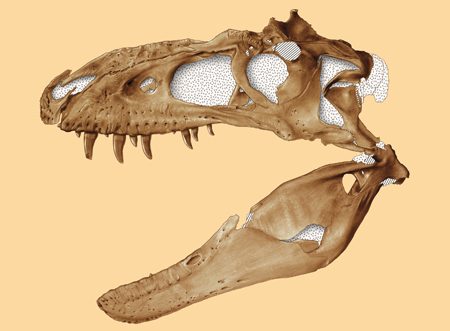 The meter–long skull of the holotype (NMMNH P-27469) of Bistahieversor sealeyi, a new genus and species of deep–snouted tyrannosauroid from the Late Cretaceous of New Mexico. Carbon dust by Dino Pulerà.

The new tyrannosaur, named Bistahieversor sealeyi (a name made from combining Greek and Navajo words and meaning “Sealey’s Destroyer of the Badlands), was a tyrannosaur that was similar to many of its more northern tyrannosaur contemporaries, including Albertosaurus and Daspletosaurus, but retained many more primitive features of the skull, including distinctive features of the snout, forehead, and horny projections over each eye. It lived about 74 million years ago. An analysis that examines the placement of Bistahieversor within a family tree reveals that it is more primitive than many of its contemporaries, but has the deep snouted skull of advanced tyrannosaurs lacking in more tyrannosaurs described from Asia and the east coast of North America. Bistahieversor is the most primitive of the large tyrannosaurs that has the distinctive deep-snouted skull found in the advanced tyrannosaurs and brought to extreme by Tyrannosaurus rex. Williamson and Carr speculated that after tyrannosaurs first dispersed into North America, the rise in global sea level cut off the tyrannosaurs of the East Coast from those of Western North America and Asia. Tyrannosaurs subsequently evolved deep snouts in western North America and these became dominant there and dispersed back into Asia. 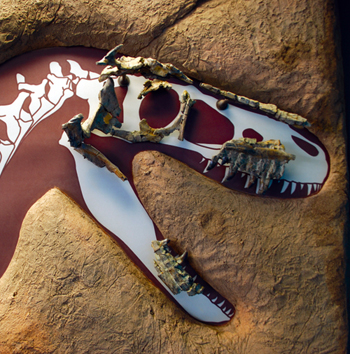 NMMNH P-25049, incomplete skull and skeleton of juvenile Bistahieversor sealeyi
This specimen is on display in the New Mexico’s Seacoast hall of the NMMNHS.

The skull of the type specimen of Bistahievorsor sealeyi is currently on display in the Cretaceous Seacoast Exhibit at the Museum of Natural History and Science. The partial skeleton of this specimen is currently undergoing preparation in the Museum’s fossil preparation lab. An additional specimen representing a subadult about half the size of the adult type specimen is also on display at the Museum. This specimen was also collected from the San Juan Basin, from lands of the Navajo Nation. The adult Bistahieversor specimen has a skull over 3 feet long (about 1 meter) and the entire animal was probably about 30 feet long and weighed approximately 3 tons. The subadult specimen is approximately half the length of the adult. Studies based on other tyrannosaur specimens show that they attained an adult size in about 30 years. The subadult likely represented a teenager. Both the adult and the juvenile specimen show scarring of the bone caused by various injuries that were either infected or were healing at the time of death. This is common to many tyrannosaur specimens and showed that they lived violent and short lives.