The Planetarium at the New Mexico Museum of Natural History & Science is an amazing theater that blends art, science, and fun! Our 55' Sky-Skan Definiti, full-dome theater features educational and entertaining multimedia presentations on astronomy and space science. Whether it's learning about the constellations in our night sky tonight, flying to the planets in our solar system, or watching mind-bending fractal zooms, the Planetarium will be an experience that you and your family will not soon forget!

Now Showing in the Planetarium

This show explores the relationship between the Earth, Moon and Sun with the help of Coyote, an amusing character adapted from Native American oral traditions who has many misconceptions about our home planet and its most familiar neighbors.

His confusion about the universe makes viewers think about how the Earth, Moon and Sun work together as a system. Native American stories are used throughout the show to help distinguish between myths and science.

Forward to the Moon

Kari Byron from Crash Test World and MythBusters launches us on a journey beyond the Earth towards a sustainable future in space. NASA’s 21st-century Artemis program, named for the Greek goddess of the moon and twin of Apollo, is the next step in our endeavor to explore the universe and land the first woman and person of color on the surface of the moon. The planetarium feature is produced by Fiske Planetarium in collaboration with TEND Studio with funding from NASA SSERVI and Lockheed Martin.

Come to this program with any questions you may have about astronomy.  During this live, interactive show, audience members are asked what they are interested in learning about the sky and that influences what is discussed.  The presenters will do their best to not only answer your questions but illustrate with available visuals on the dome.

Narrated by George Takei, our award-winning planetarium show explores asteroids, comets, and the hard-hitting stories of our cosmic origins.

Embark on a journey back in time and across the Solar System, following the paths of asteroids and comets that have collided with Earth—and those that roam far from home. These ancient objects travel billions of years before reaching Earth, and their impact can be so powerful that just one collision can change the course of life on our planet.

Scientists aren't waiting for asteroids and comets to come to us to learn more about them—get an up-close look at spacecraft sent to rocky asteroids and icy comets to collect invaluable data. You’ll follow the trek of the Chelyabinsk meteor as it entered the Earth's atmosphere in 2013 and visualize major shifts in the history of the Solar System billions of years in the making—and all in under an hour.

Join a family of space aliens as they tour our solar system in search of the ideal vacation destination.  Along the way, learn interesting facts about all of the planets and even some moons.

Fractals will return when the museum has sufficient staffing to reopen on first Friday evenings. 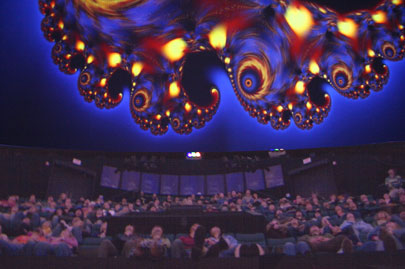 Explore the never-ending world of fractals in this award-winning and inspiring planetarium program. The shows take audiences on a journey through the infinitely complex patterns known as fractals. This live, narrated show explores the fractal patterns in nature as well showing how math can become incredibly beautiful. The abstract landscapes that emerge from simple equations inspire fascination and wonder as they bring us face to face with the infinite.

Shows frequently sell out.  Purchase tickets in advance from the Fractal Foundation