We have been seeing lots of small light-colored veins crossing through the outcrops here on Matijevic Hill, and we have tried to get a handle on the composition of these veins  by doing multiple offsets with the APXS. It appears that the small veins are calcium sulfate, as best we can determine. In other words, they are probably gypsum like the large veins that we saw around the margins of Cape York. Here are exmples of some of theseback in the Ortiz outcrop. They are tiny, measuring at a millimeter or two in width. But they are everywhere. 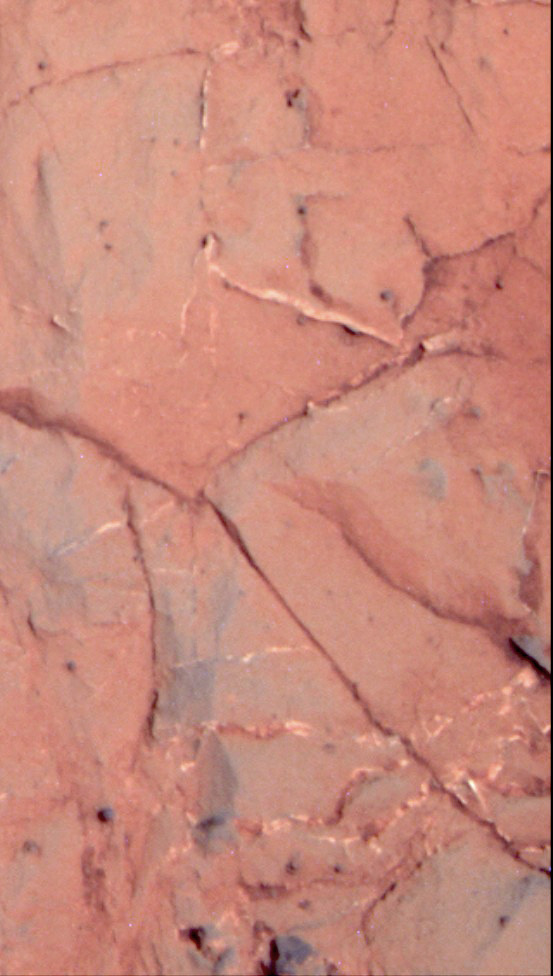 Oddly enough, Curiosity has just encountered a similar sort of veins in the outcrops where it is sitting at gale Crater.

We moved north to an outcrop we called “Flack Lake” recently and did a quick look at the rocks with the MI and APXS. The target name was “Fullerton”. Here is a MI mosaic of Fullerton, an area on the outcrop a little under 3 inches across that we brushed with the RAT. The image from the MI has been co-registered with a color Pancam image in order to bring out the color. 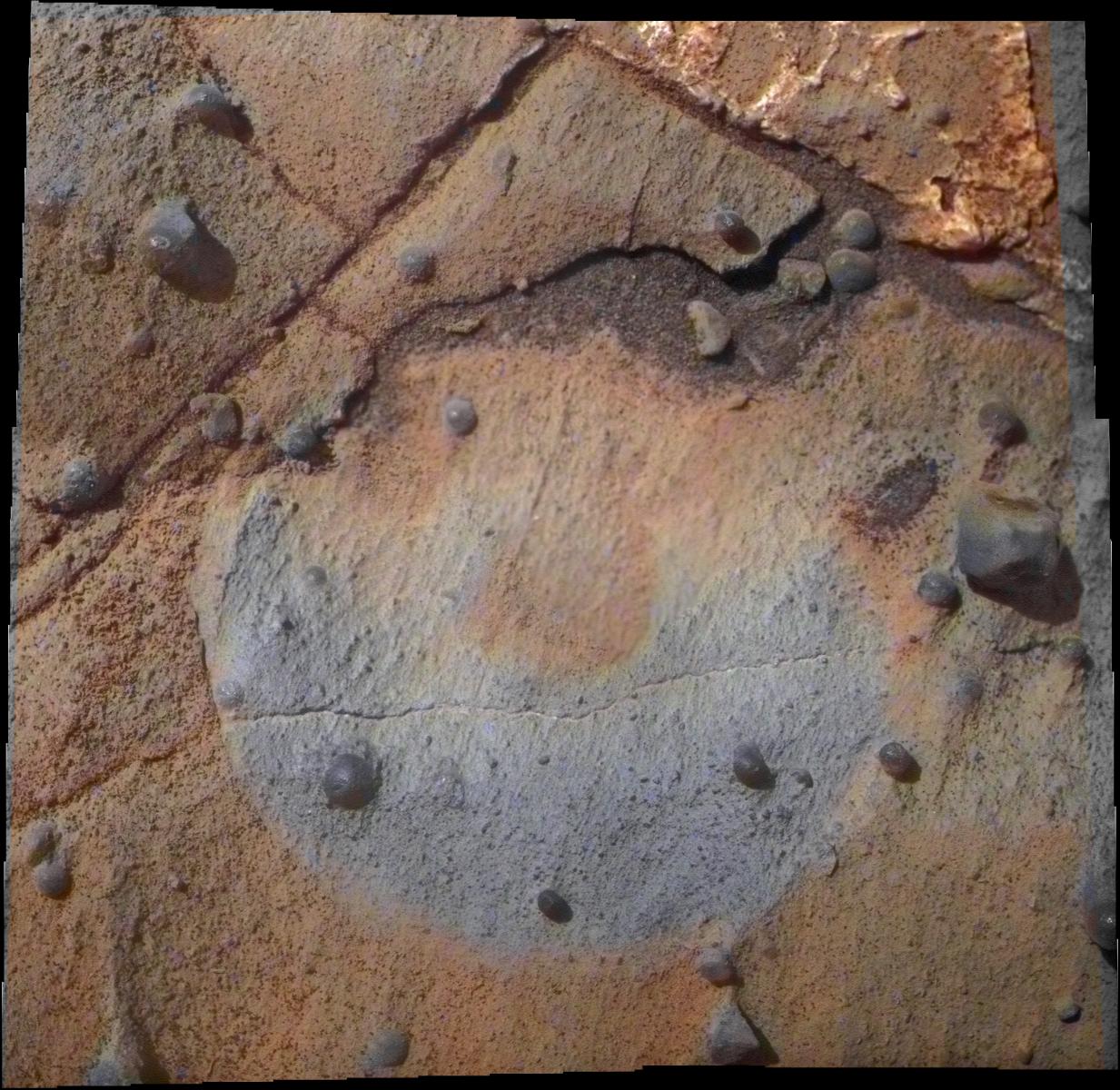 It looks like the "newberries" are part of the Whitewater Lake outcrop, not just loose spherules sitting on top of the outcrop surface. So the contact between Whitewater lake and the impact breccias farther upslope (we think) that we have been calling "Shoemaker Formation", may be transitional. The iron content of the rock here based on the APXS results  is not sufficient for these to be hematite concretions (“blueberries”). These are something different.

With that question examined, the next question on our list is the location of the contact between the rocks low on the hillside, which tend to look like Whitewater Lake,  and the more impactite-like rocks we saw up on the ridge crest. So we have driven upslope around sol 3212 to see if we can find the contact between the rocks containing newberries and the rocks that are more like impact breccias in appearance.

Here is my geologic map of our current location. We think the brown unit labeled “S” is on top of the pink unit labeled “W”. But we need to confirm that. So in the next drive we will go up slope to the outcrops on the crest of the hill.Remember that we have previously driven a loop around the outcrops to see what is here. And now we are going back at looking at the especially interesting and informative outcrops, just like the way we would do it in the field here in New Mexico. 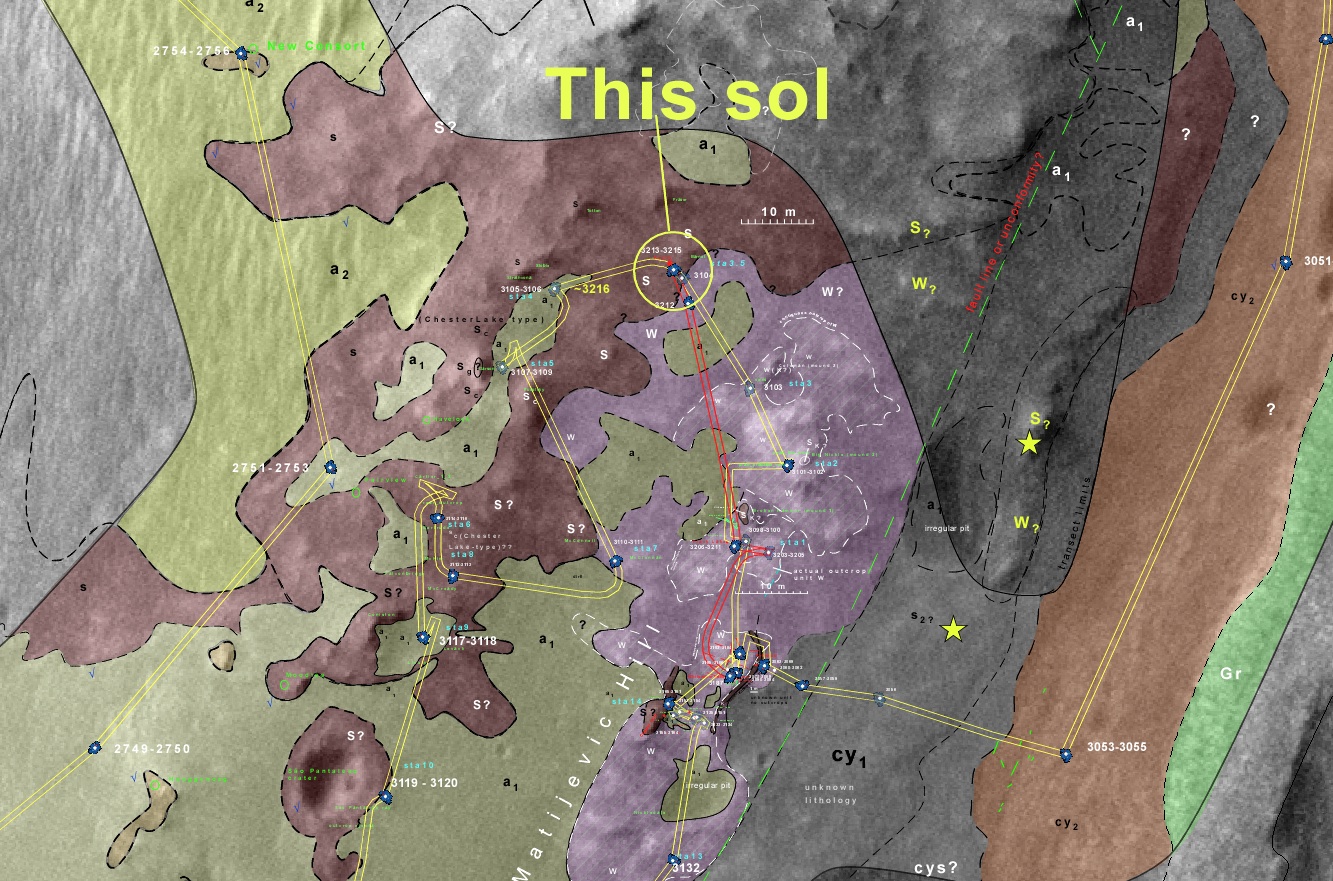 Here is a zoomed-in look at the local terrain showing where Opportunity is and where it will drive in the next sol. These are Navcam frames that have been re-projected to an overhead view. The red tracks are the current drives, and the yellow tracks are from the prpevious drive trhough this area last month. 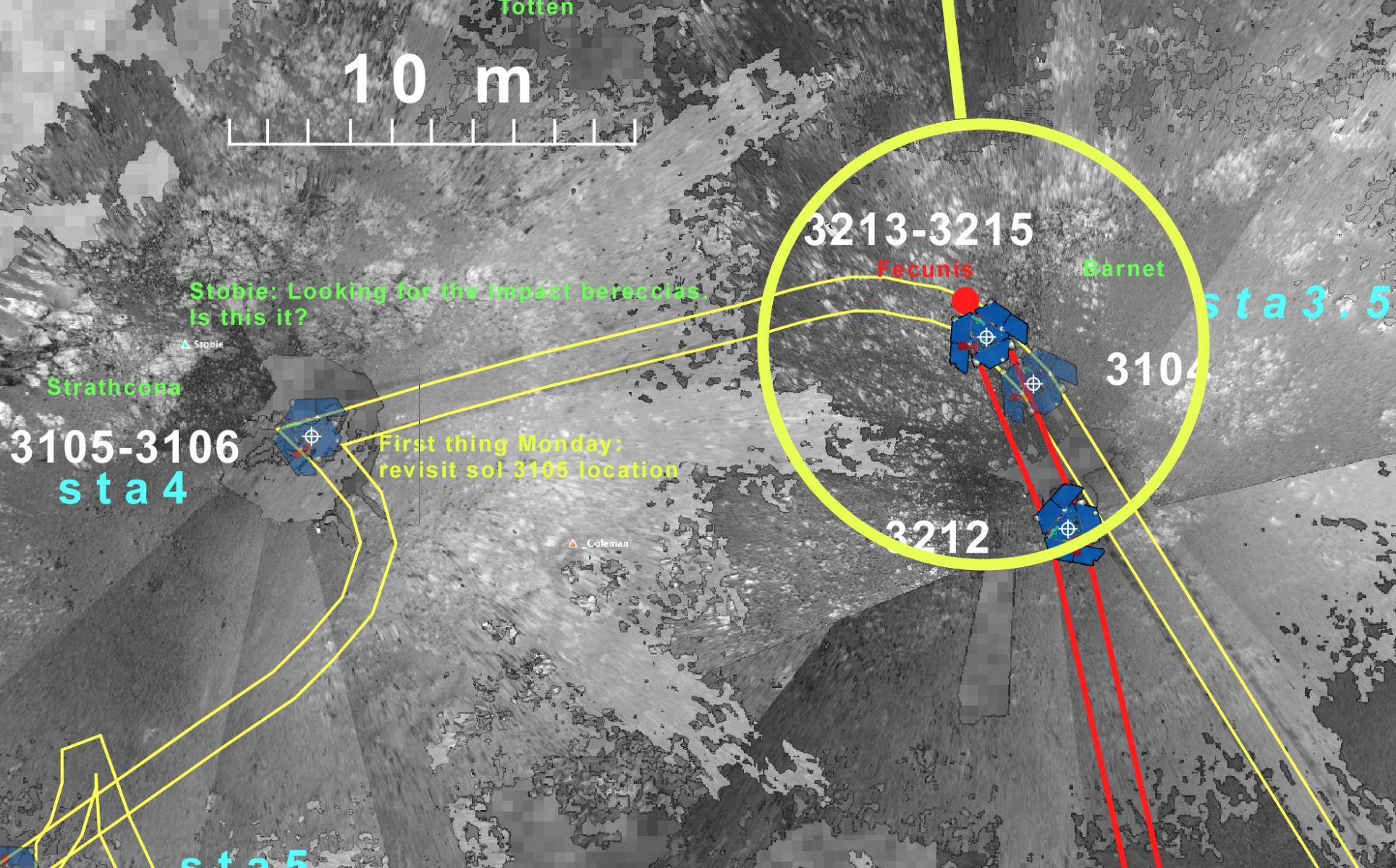 If we are lucky, we will be driving downslope and preparing to finish up our outcrop investigations here on Matijevic Hill within the next seven days or so.