• Power is good due to panel cleaning events

Today is the tenth anniversary of Opportunity's landing on Mars. here at the New Mexico Museum of Natural History and Science, we just opened a tenth anniversary Exhbit. The exhibit supplements the existing Mars Exploration Rover Exhibit that was opened in December, 2003 weeks before the first landing of Spirit.

Opportunity is exploring an outcrop high up on Murray Ridge, the crest line of Solander Point, a part of the rim of the 22 km diameter Endeavour crater. Opportunity came here to see if these rocks are impact breccias or the clay-bearing rocks like those seen back at the Cape York segment of the crater rim. Orbital data says that there are possible clay-bearing rocks down here somewhere. We just need to find them.

This location, which we are calling Cook Haven, is a good winter haven for Opportunity as the southern Martian hemisphere winter solstice approaches, because the slopes are in the right direction to tilt Opportunity's solar panels for good solar energy. There are also some largish areas of outcrops here, so this is a good place to do some detailed work while we wait out the depths of winter. 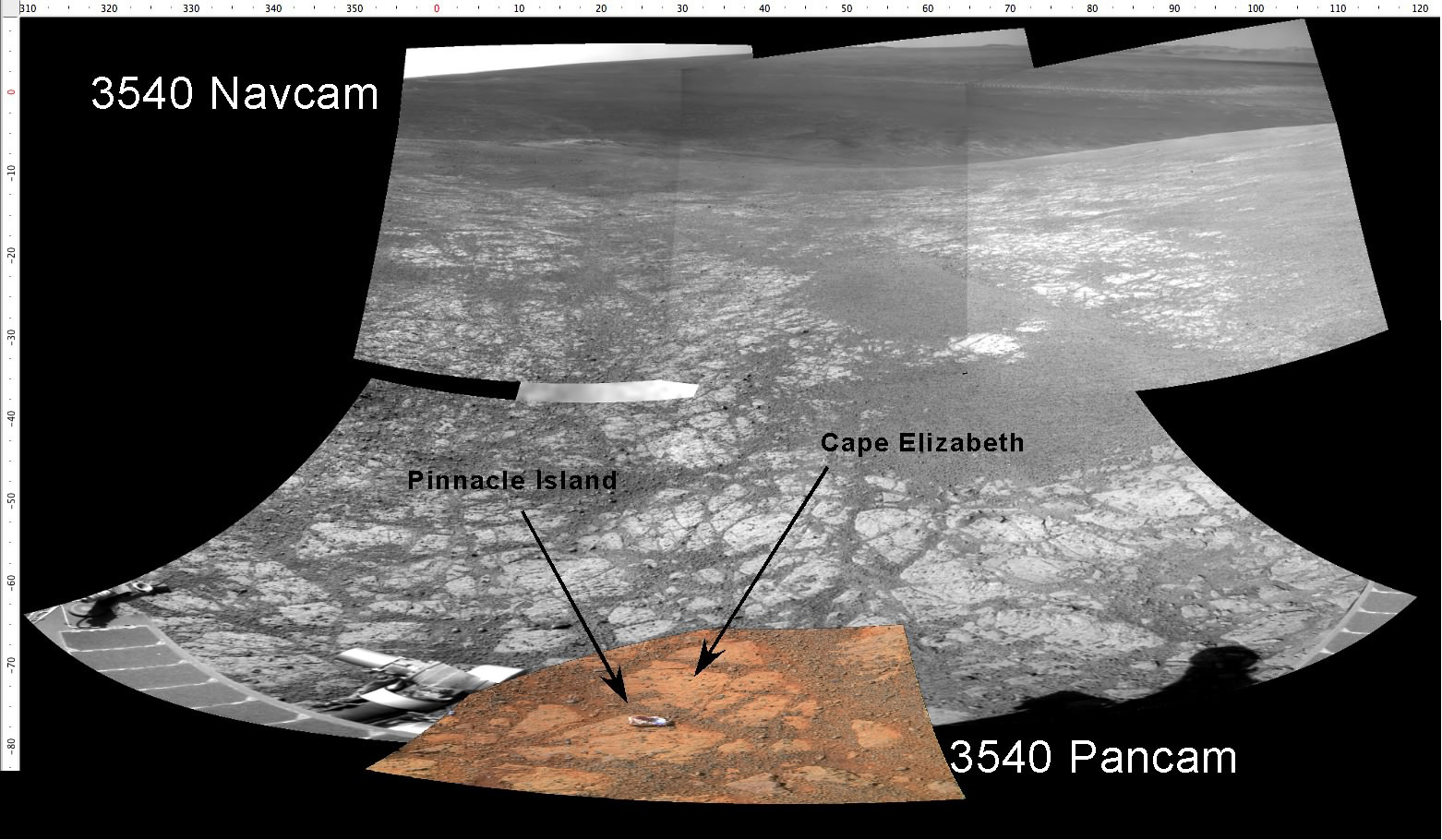 The outcrop in front of Opportunity on this sol. The odd rock discussed below is identified as "Pinnacle Island" in this composite Pancam color and grey Navcam image taken after the drive on sol 3540. The viw is toward the east across the floor to the far rim of Endeavour crater 22 km away.

Recently the appearance of a "strange rock" next to Opportunity has sparked a flurry of interest. In fact the whole "jelly donut", as the rock is called, has gone a bit "viral." The odd thing is that odd rocks happen frequently, presumably churned up by rover wheels,  but for some reason it seems to have caught the attention of the media.

This particular mystery all started when we did a standard "bump" or drive on sol 3840. Opportunity had arrived at this location on sol 3212 and had done some examination of the local rocks. The first sample was too dirty, so when we identified a cleaner outcrop behind us we decided to just rotate Opportunity in place and move east about a 1/3 of a meter to reach better outcrop. We got that outcrop in the "work volume" and analyzed it, but it appears to be mostly like the outcrops we saw coming up the ridge.

But, oddly, right next to the spot we were going for, there was this rock that was not there before. It is not unusual to move small rocks around as we drive, so its sudden appearance is consistent with a small fragment of the surface being moved when Opportunity turned in plave on sol 3540. But this one was odd appearing because it has a bright outside edge and a dark red center, which is not something we have seen. Thinking that it might be some sort of unusual mineralization preserved on a formerly buried rock face now flipped over to view, we decided to put the APXS down and get a quick analysis which detected the presence high sulfur, magnesium, and manganese. 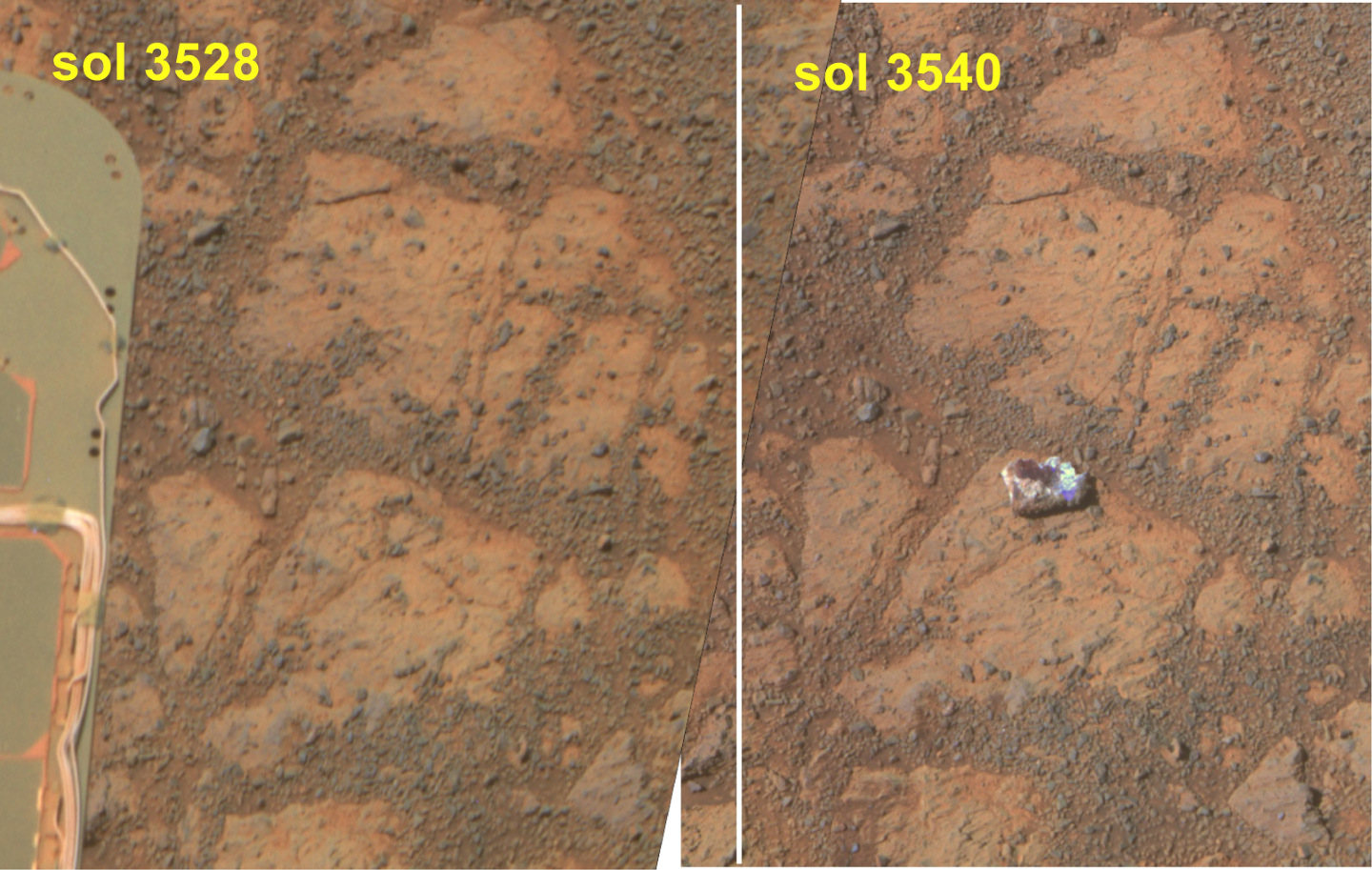 So the rock is odd, but we think it is some sort of mineralization, which fits in with the extreme alteration that we have seen in the old rocks of the crater rim. But we would just like to get enough information to decide if the minerals were concentrated long ago or are the result of recent environmental effects.

A steady series of recent solar panel "cleaning events" has resulted in better power for this time of the year than seen in the previous few winters. So chances of Opportunity being "on the move" again in the not-too-distant future are good.