Opportunity drove 48 meters on Sunday, July 27, exceeding the 21 meters necessary for it to have driven exactly 25 miles. ASt the concludion of the drive Opportunity had driven farther o=n the surface of another planet than any rover in history. This means that we have driven 25 miles actoss Mars and seen things that no one would ever have imagined that we would see. 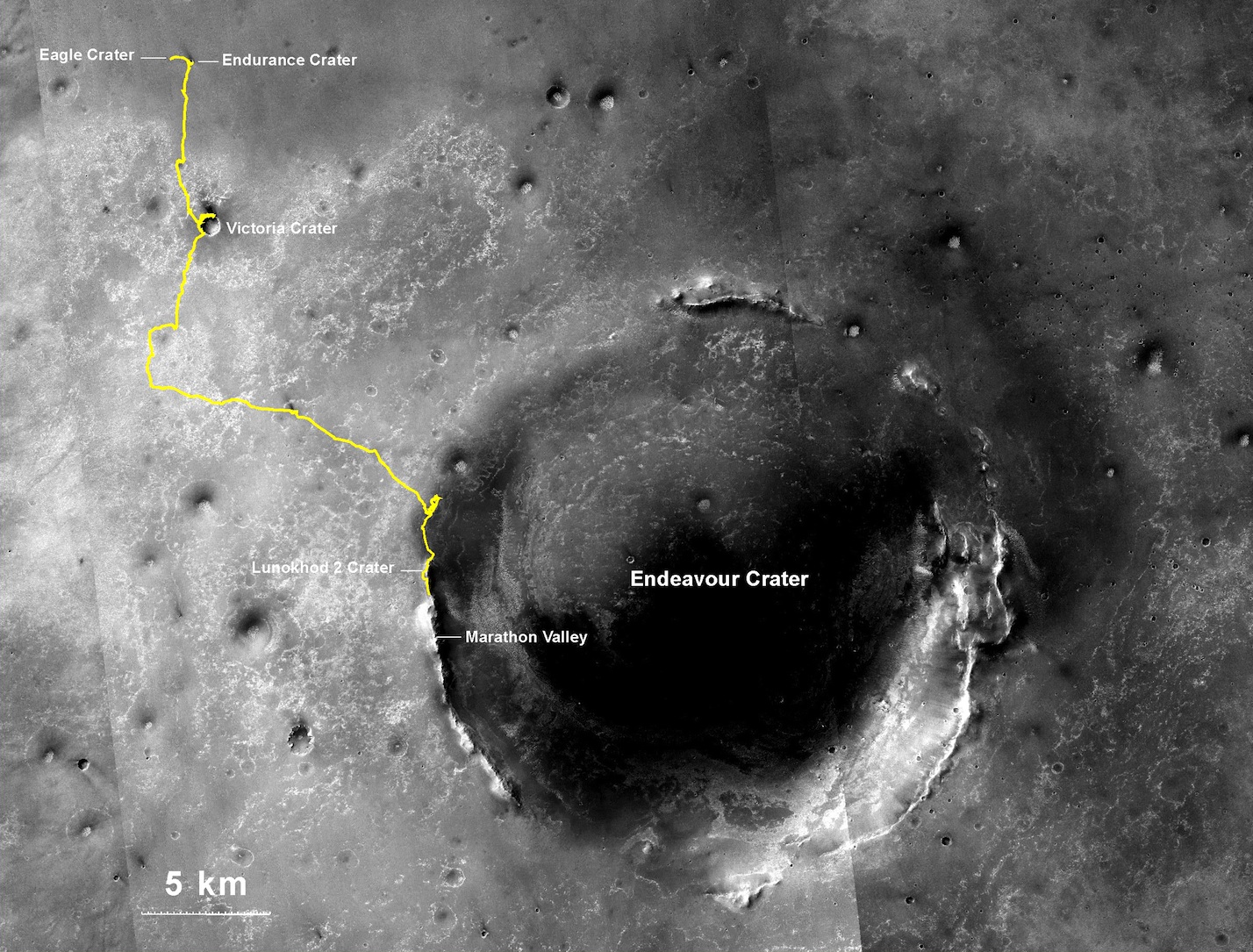 Above is a map I assembeled using MRO/Context camera images asa base, showing the complete 40 kiolmeter (25 mile) traverse across the surface of Meridiani Planum, and southward along the rim of the Endeavour crater. 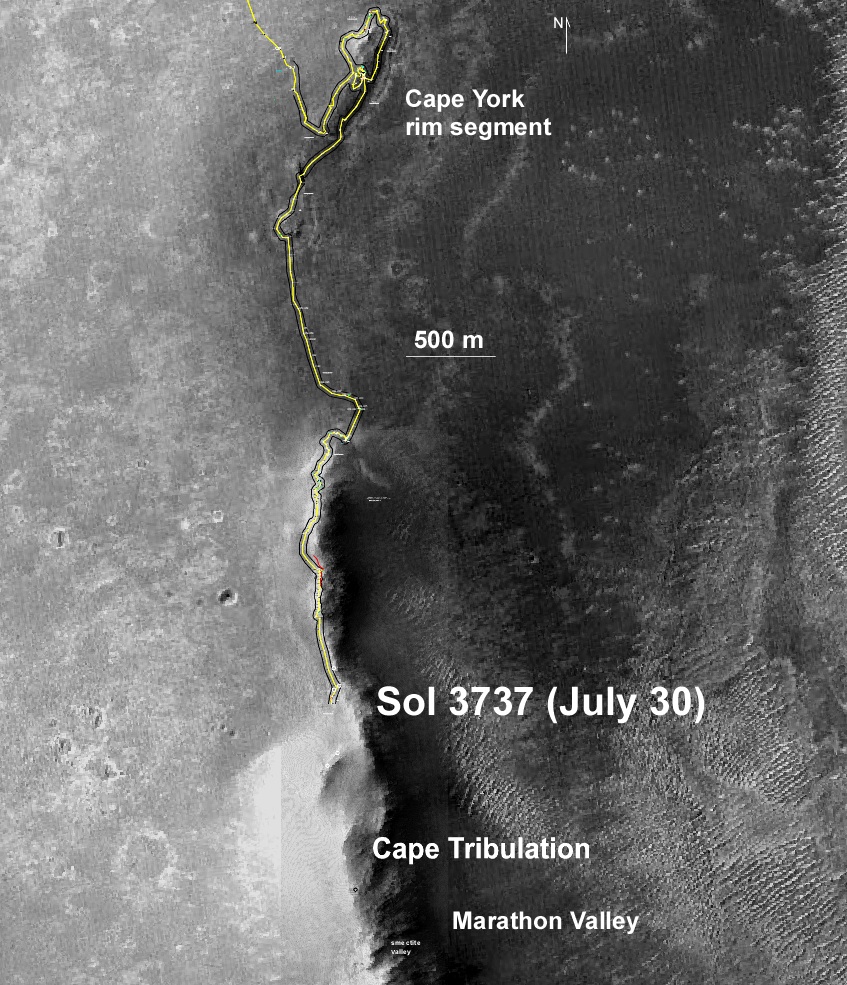 This is a closer view of the traverse since arrival on the rim of Endeavour crater. You can see how the rim of the crater is old and eroded into a series of "segments", much of which is nearly buried by the much. much younger sands of the surrounding Meridiani Planum. The rocks along the rim of Endeavour crater date back to a time when Mars was much more like Earth. Hence our interest in reading that rock record preserved in the rim rocks.

In the last couple of weeks since the last posting here, Opportunity finished the long slow drive across the ridge where we were looking for outcrop evuidence of altered outcrops. At the end of that ridge it dropped down several meters to a saddle in the rim with a quick look back, just in case there was a view of the geologic section here. Then the drive conbtinued southward with the goal of eventually get to the base of the next rim segment, Cape Tribulation. This will be a serious climb, and equivalent to the one Spirit did over in the Columbia Hills at Gusev crater several years ago. The ascent will be roughly 90 meters to the crest.Along the way there will be several science targets that we will want to visit. And, fianlly, we only have the coming Martian summer to do all this, since we will need to be pulling into the next winter "campsite"  by the fall of 2015. So....Road Trip! 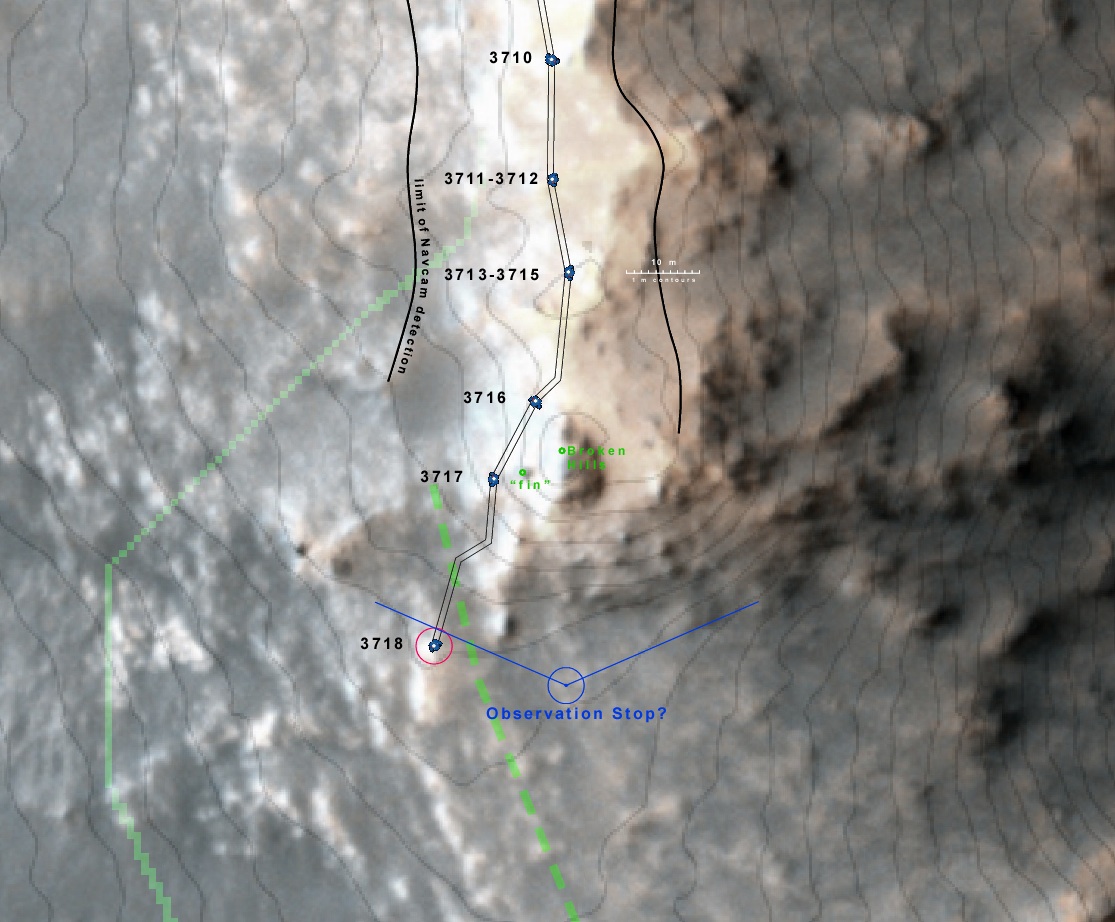 This shows the last few drive before dropping down off the ridge, and the planned location look back to see what is exposed in the south-facing edge of the ridge.

Well, we looked back and this is what we saw. I will need to look at this carefully and see just what that is!

Meanwhile, here is the view ahead in stereo. Shortly we hope to be up on that ridge ahead with the big outcrop.