SInce the last report Opportunity has driven into the next valley to the south which we have informally named "Bitteroot Valley." On this sol Opportunity is finishing up observations on the first outcrop target of its 10th mission extension plan. In this two-year plan Opportunity will explore the lower inner walls of Endeavour crater. It will then climb back out to the west and south while exploring the stratigraphy and structure of the crater wall, and then, drive south along the rim. Later in the year the plan is for Opportunity to drive back into the crater, following the floor of a fluvial channel cut in the rim of the crater. If Opportunity is able to follow this plan, then this will be the first drive inside a known fluvial channel on Mars. The results should be interesting.

Meanwhile Opportunity is exploring an unusual knob here on the lower inner wall of Endeavour crater informally named "Spirit Mound." We are using a Lewis and Clark naming theme for features and as Opportunity drives south we will use names from towns along the route taken by Lewis and Clark in their journey westward.  Right now the strange knob is "Spirit Mound", which is appropriate both because it is a name from the list of places along the Lewis and Clark route but also because it honors the memory of Spirit rover in a way. 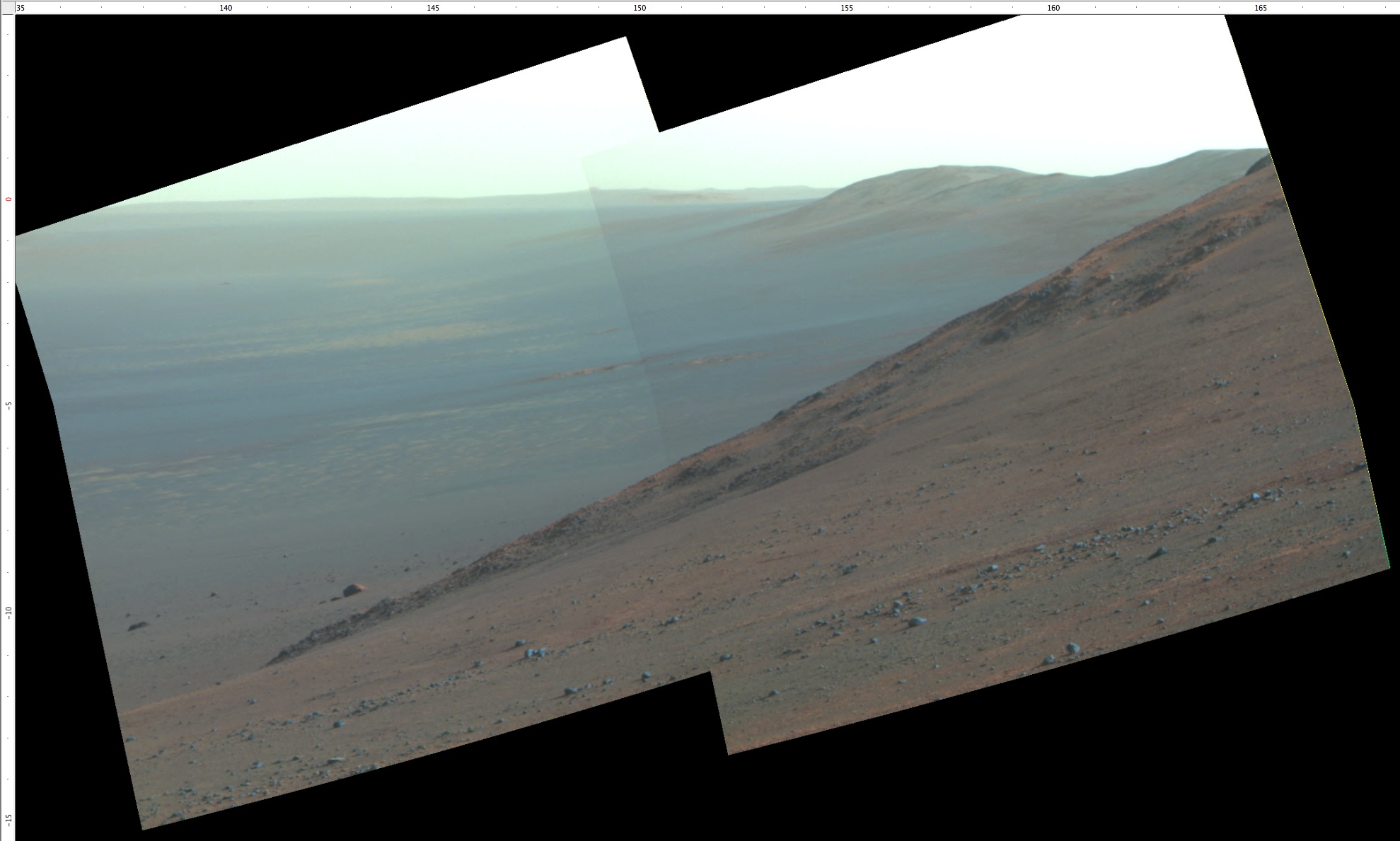 01. The view from this location southward pretty clearly shows how steep the crater wall is. It is important to remember that no one has ever traversed in the inside of such a large crater before, so the geological details of just what we are seeing have to be hammered out by us on a daily basis. In this view you can see the wall farther south in the distance curving around to the east. Somewhere there in the dusty summer haze is the portion of the wall that includes the channels to be used as a "footpath" by Opportunity before the end of this martian year. Pancam two-frame mosaic from current location on sol 4534. 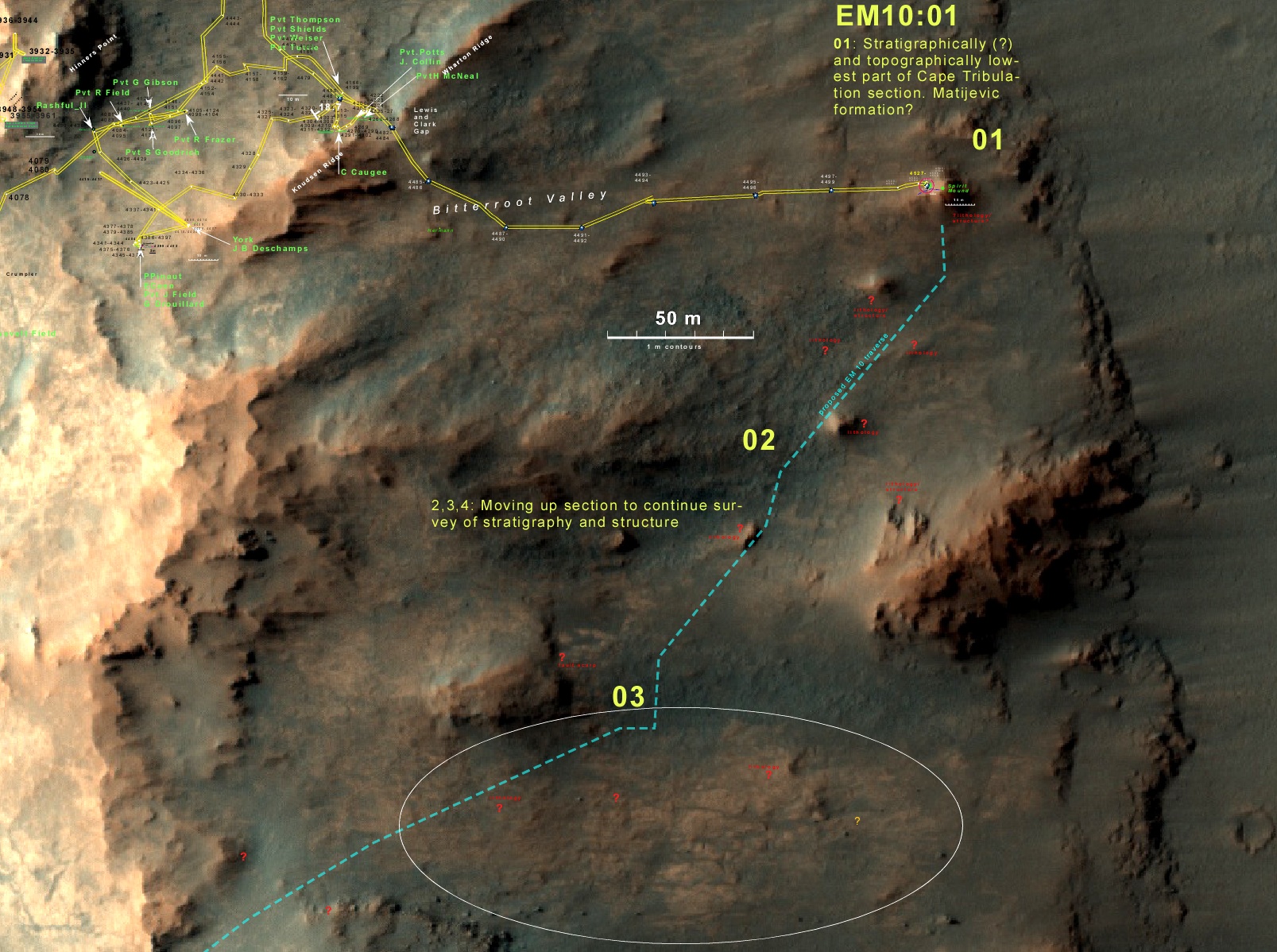 02. This is a map of Opportunity's past traverse (yellow) and its planned future traverse to the south (cyan). The crater wall slopes steeply (about 25°) up to the left (west). Opportunity is currently examining one of the mysterious knobs here on the lower inner crater wall. 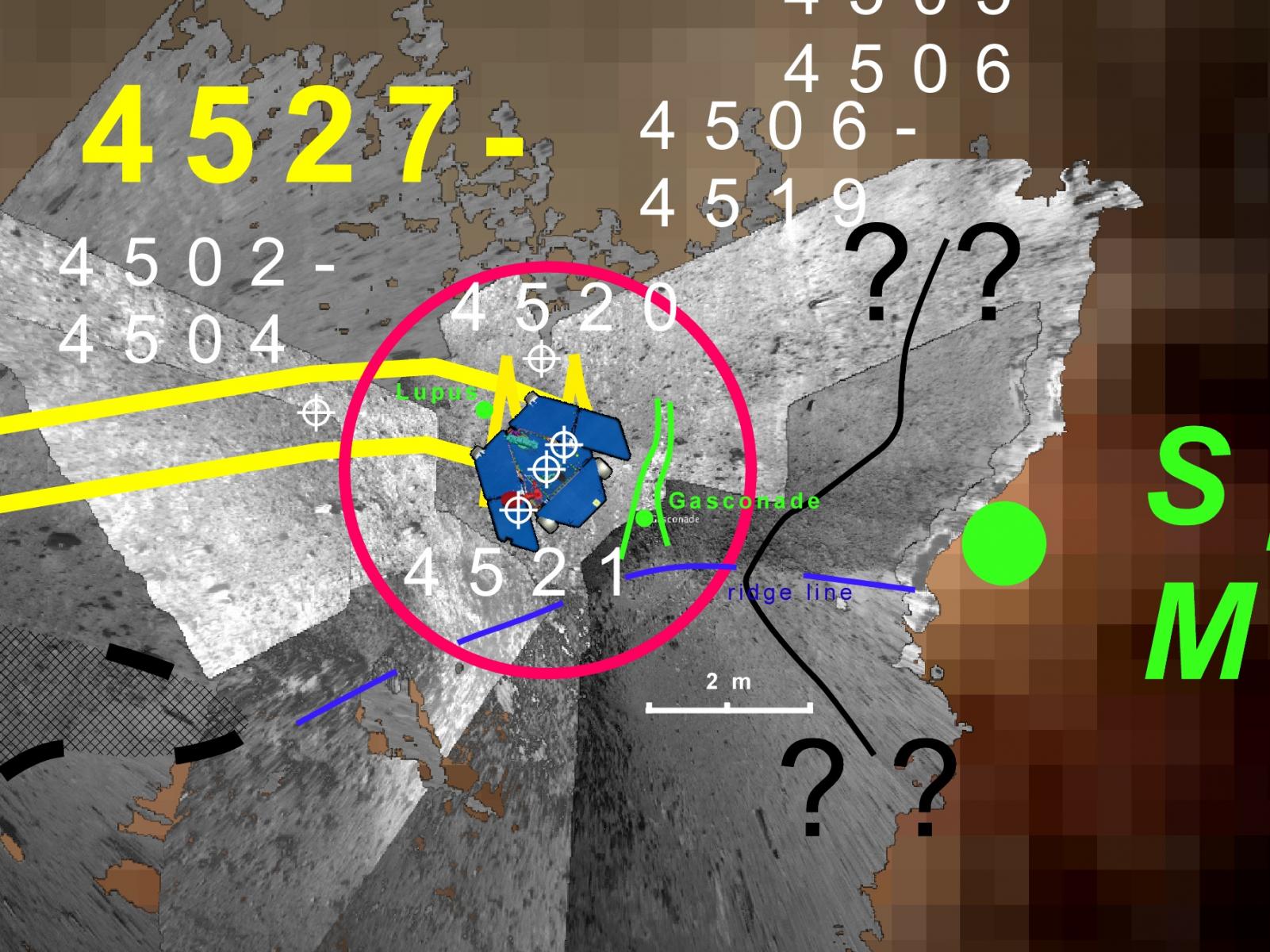 03. Here the Navcam images are overlain onto the local terrain to show the local setting. Opportunity has been examining several outcrop targets here in an effort to establish the lithology and elemental compositions. There are some odd vein-like features crossing the outcrops. So far the outcrops are the impact breccias that make up the crater wall, but the veins are gypsum-like infused outcrops apparently. A lot of fluids have passed through the rocks here. Again names are from towns along the route taken by Lewis and Clark. 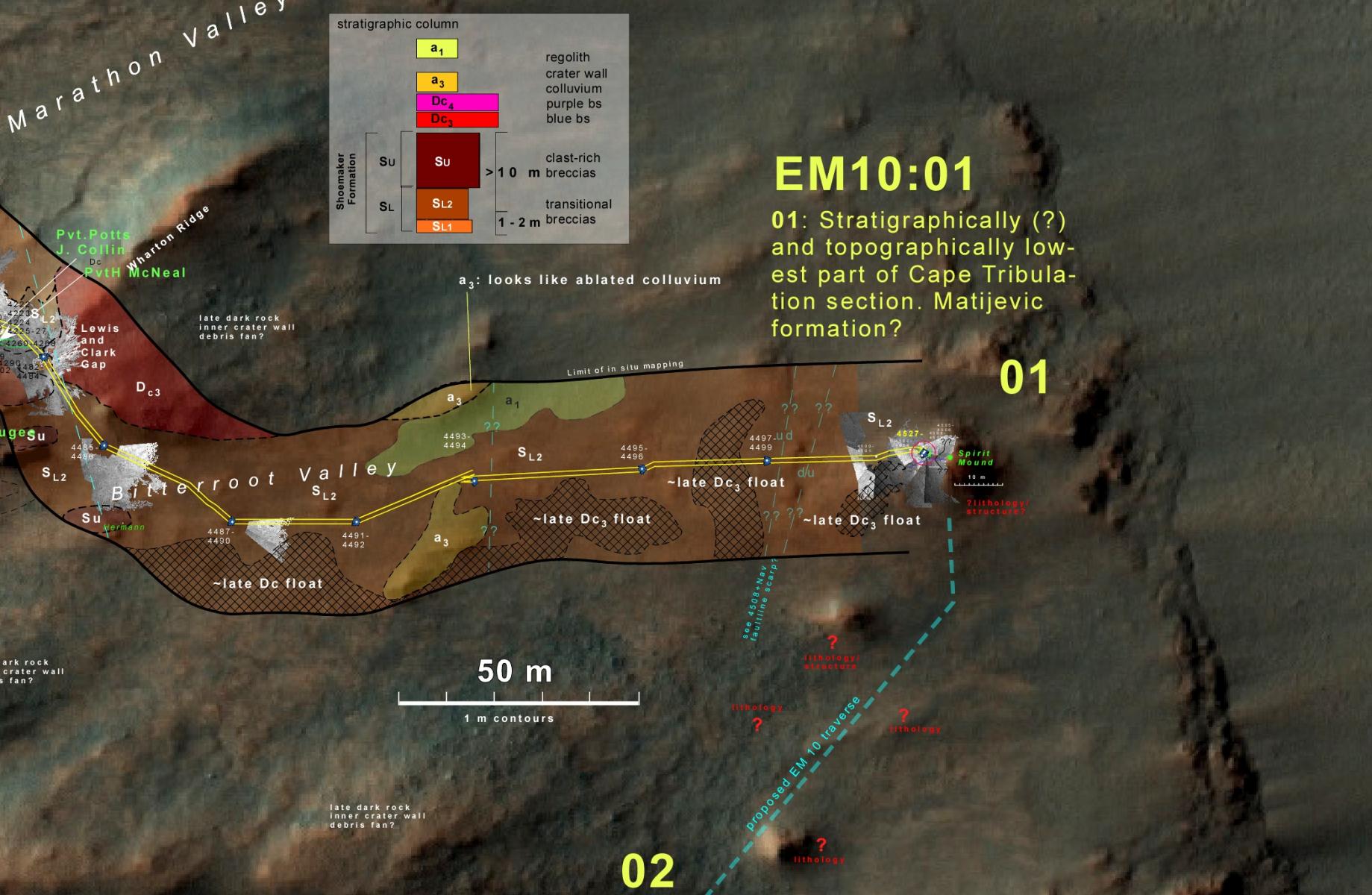 04. I am able to keep track of the geology, including stratigraphic sequences and attitudes of layers, and other structures within about 20 m of Opportunity. This results in the map shown here, which is basically a field geologic map. The first such map built on another planet. The brown color (SL2) is "Shoemaker formation, the impact breccias of the Endeavour crater rim/

05. Looking at Spirit Mound from the current location, one can also depict the geologic units in what I like to call field geologic sketch maps or perspective-based geologic maps. This view is looking east with the crater floor beyond Spirit Mound. IN the next few sols Opportunity will drive to the top of Spirit Mound before heading south.