Opportunity is continuing its great 21st century natural history expedition on Mars, exploring the complex geology and record of past climate here on the rim of the 22-km Endeavour impact crater. Opportunity has begun the ascent of the steep slopes here in the inner wall of Endeavour impact crater after completion of a survey of outcrops close to the crater floor. The goal now is to climb back to the rim where the terrain is less hazardous, drive south quickly about 1 km south, and arrive at the next major mission target on the rim before the next Martian winter. 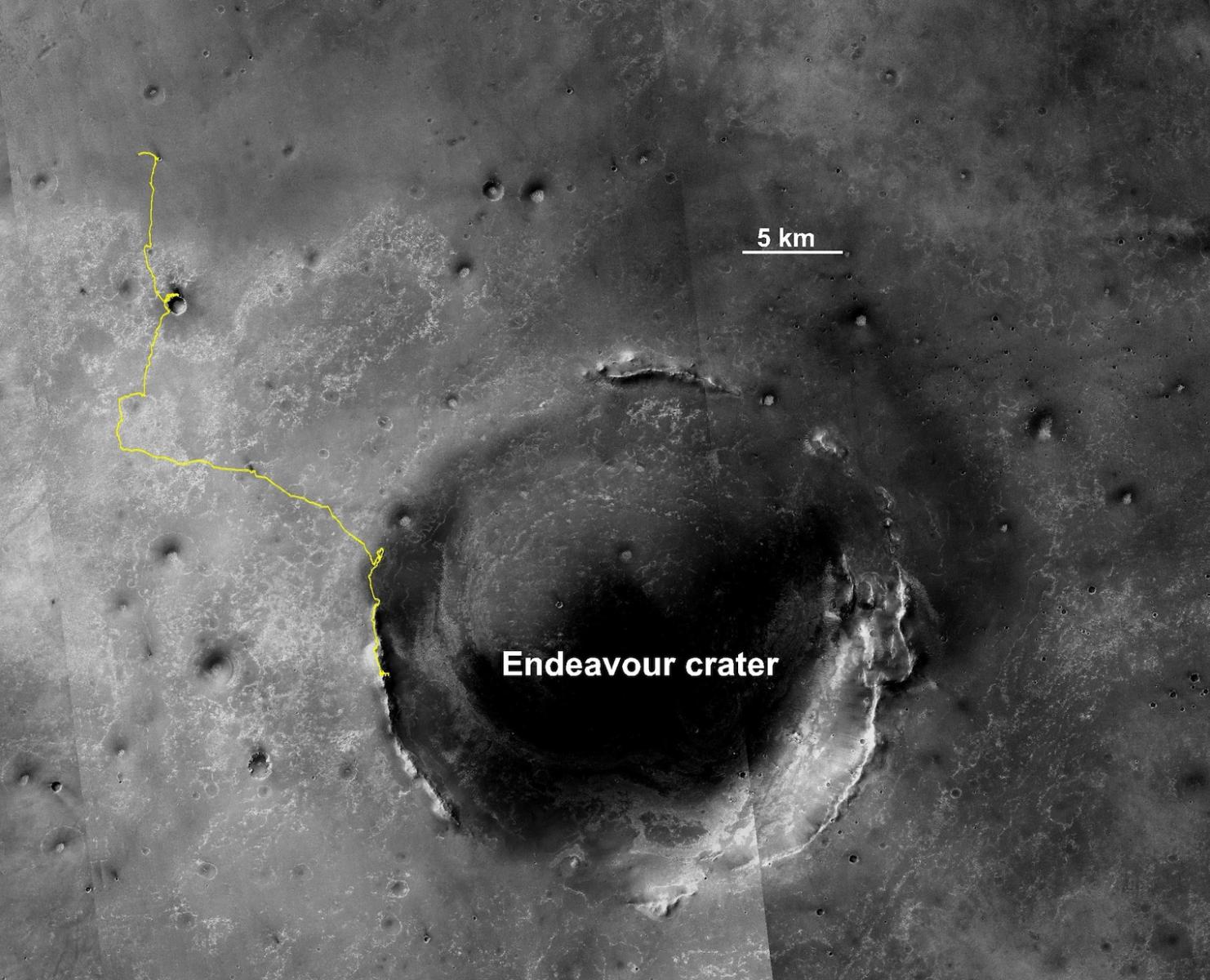 The traverse thus far has been over 43 kilometers, the last 10 km of which have been along the rim of Endeavour crater (named after the ship).  Endeavour crater dates from the earliest Martian geologic history, a time when water was abundant and erosion was relatively rapid and somewhat Earth-like. So in addition to exploring the geology of a large crater, a type of feature that no one has ever explored in its preserved state, the mission seeks to take a close look at the evidence in the rocks for the past environment. Thus we are trying to stick to the crater rim where the oldest rocks are. 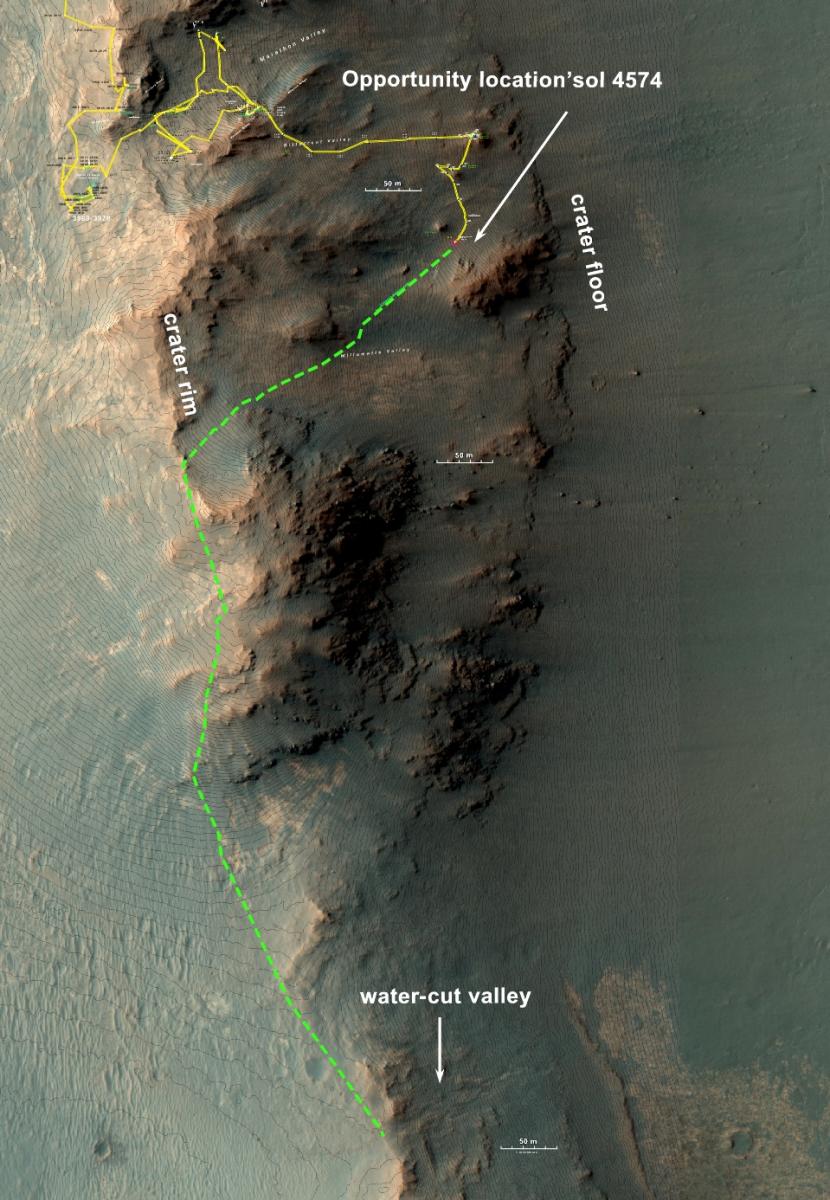 Segment of the crater rim where Opportunity is currently working. The yellow line is the traverse from the rim down the Marathon Valley to the foot of the inner crater wall. Opportunity is just beginning the drive back out. The green line is the proposed path in the coming months. The object is to drive back up rather steep slopes and through rugged terrain of the crater wall to the rim. From there the drive will be south to the head of a water-cut valley. 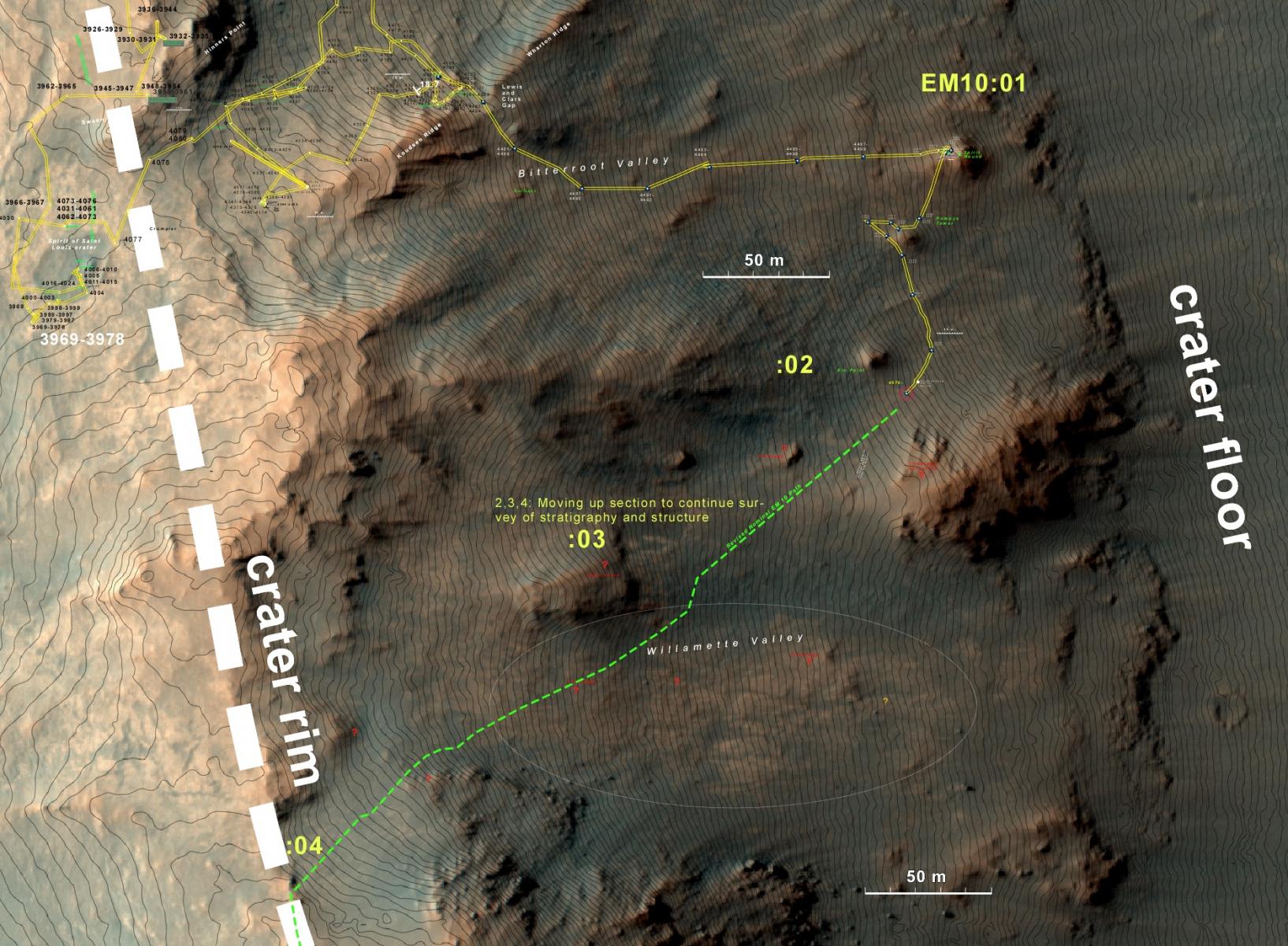 Close look at the crater wall. Previously we had no understanding of the geologic complexity of a large impact crater and how it related to the actual terrain of a large crater. The only craters that we have had here on Earth are all eroded flat. The complexity that we are seeing on Mars is too great to describe completely here, but observations of outcrops along the traverse have shown that there it is a structural geologist’s challenge of faulting, diverse lithologies, variable types and timing of alterations, and a long history of erosion and deposition.

The green line is the route that we will likely be driving over the next month or so up and out of the crater. 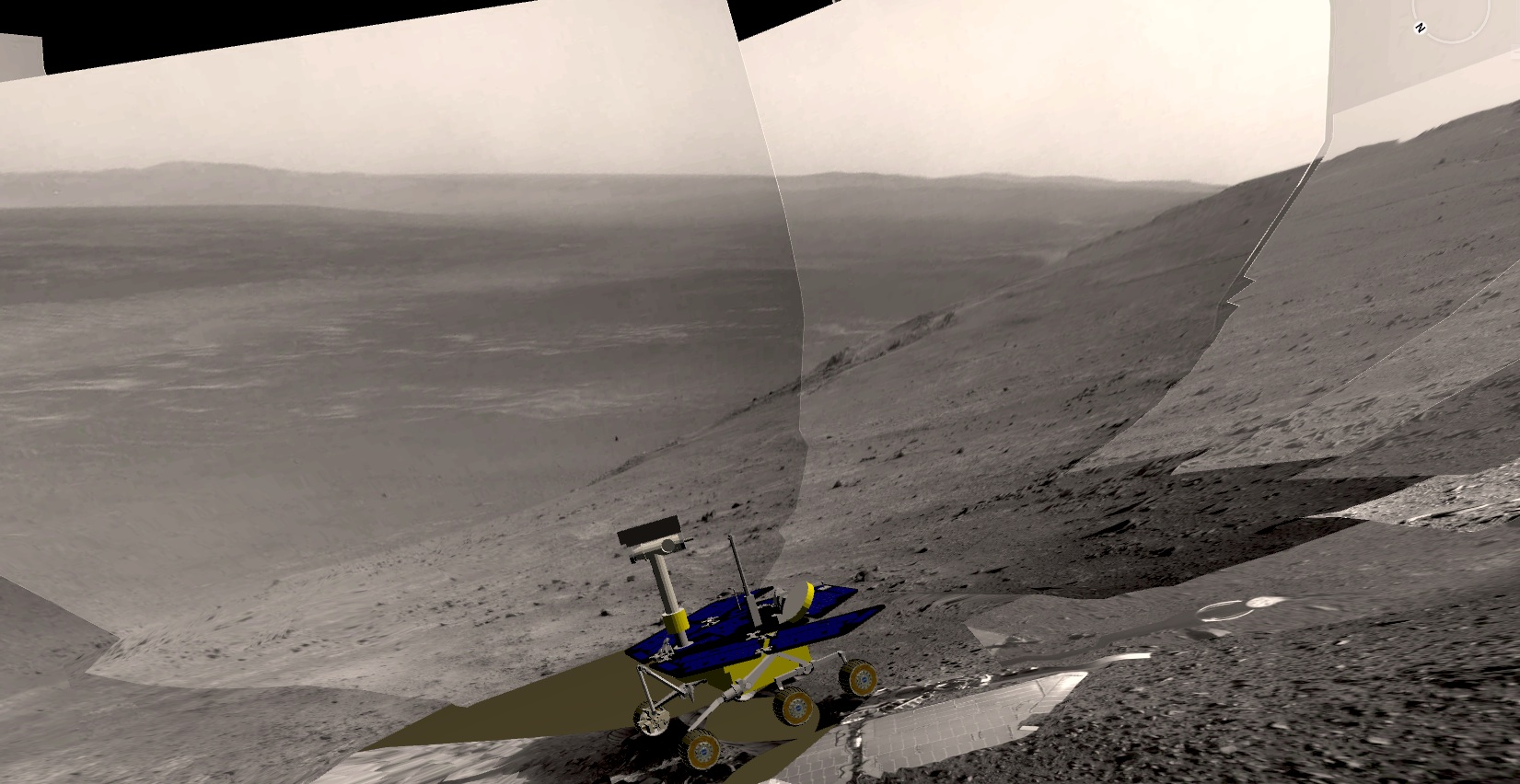 Since the Navcam panoramas are in stereo, it is routine to turn them into digital elevation models into which a model of Opportunity can be placed, thus showing the physical situation of the rover. So this is what the terrain looks like on the inner crater wall. And that is the far wall in the upper right 22 km away. The floor of the crater is the dark streaky area. Notice that the summer dusty season makes the crater floor near the base of the far wall look hazy. Since this picture was acquired, Opportunity has continued to drive up the slope and is, as of this writing, in the far upper right of this scene.

The view south and west upper the crater wall with Pancam shows that Opportunity has a rocky obstacle course. Again, that is a nineteen to twenty degree slope and there are a lot of rocks. Most people would have trouble walking on a slope like this with all the loose rocks. Twenty degrees actually is a fairly steep slope.