Opportunity was continuing to gather data from outcrops in Perseverance Valley up until the end of May and the first week of June. But then a dust storm developed to the northwest and unexpectedly expanded into Merdiani Planum where Opportunity is exploring.

In one sol (Mars day) the power output of the solar panels dropped from nearly 700 W-hrs to 123 W-hrs. By the next day the power had dropped to 22 W-hrs. The optical opacity factor of the atmosphere, which is normally described by numbers like 0.3-0.5, sky rocketed to outrageous numbers. During the previous dust storm back in 2007, the opacity was about 5. The last report on Sunday indicated a factor of 10.8! A new Martian record. 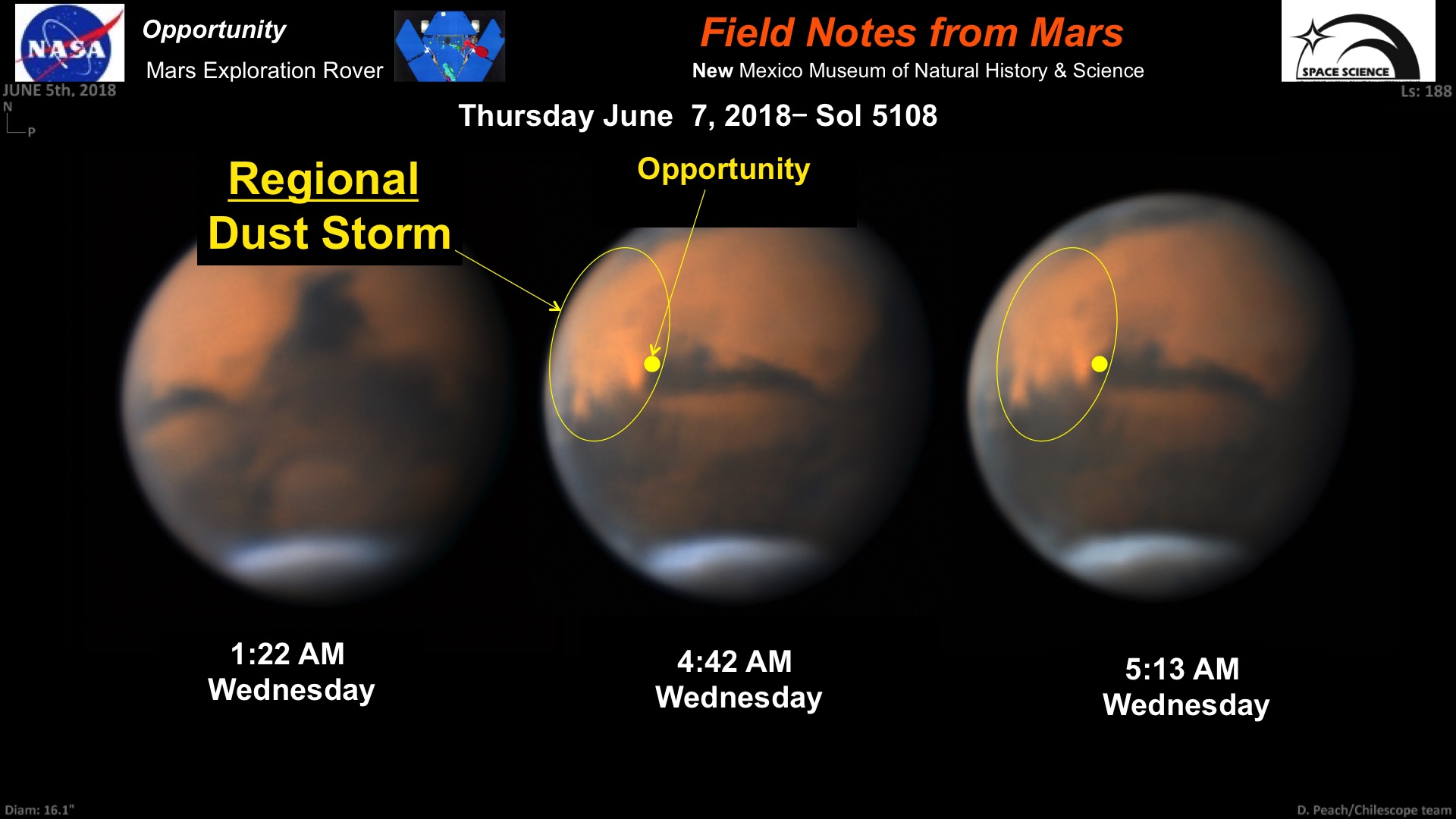 This sequence of images from an Earth telescope shows the sequence of development of the storm on June 7. 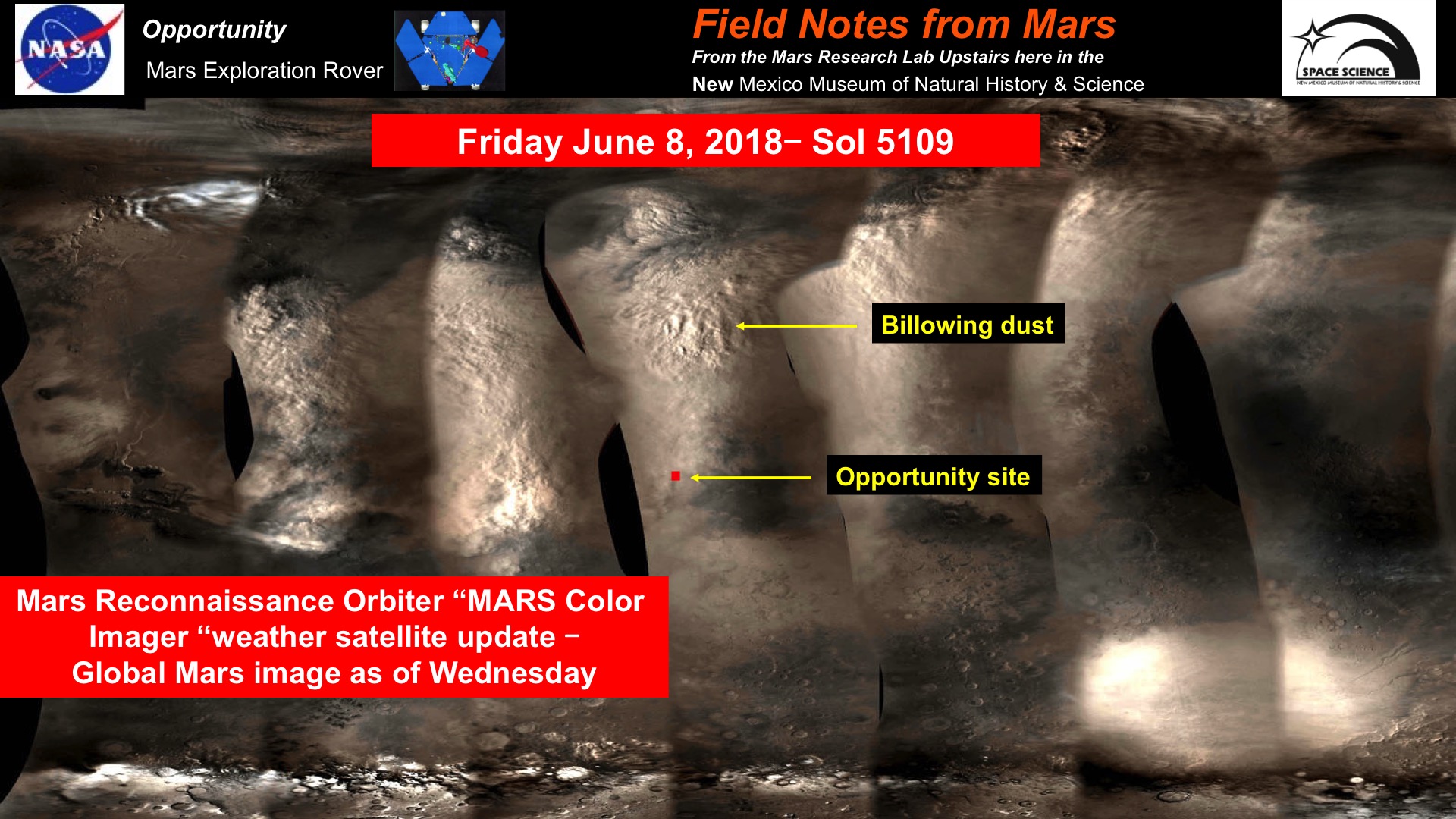 The Mars Reconnaissance Orbiter (MRO) does daily ("solly"?) weather images of Mars. This shows the entire surface of Mars in cylindrical projection with Opportunity in the centter near 2 degrees south/ 354 degrees east. 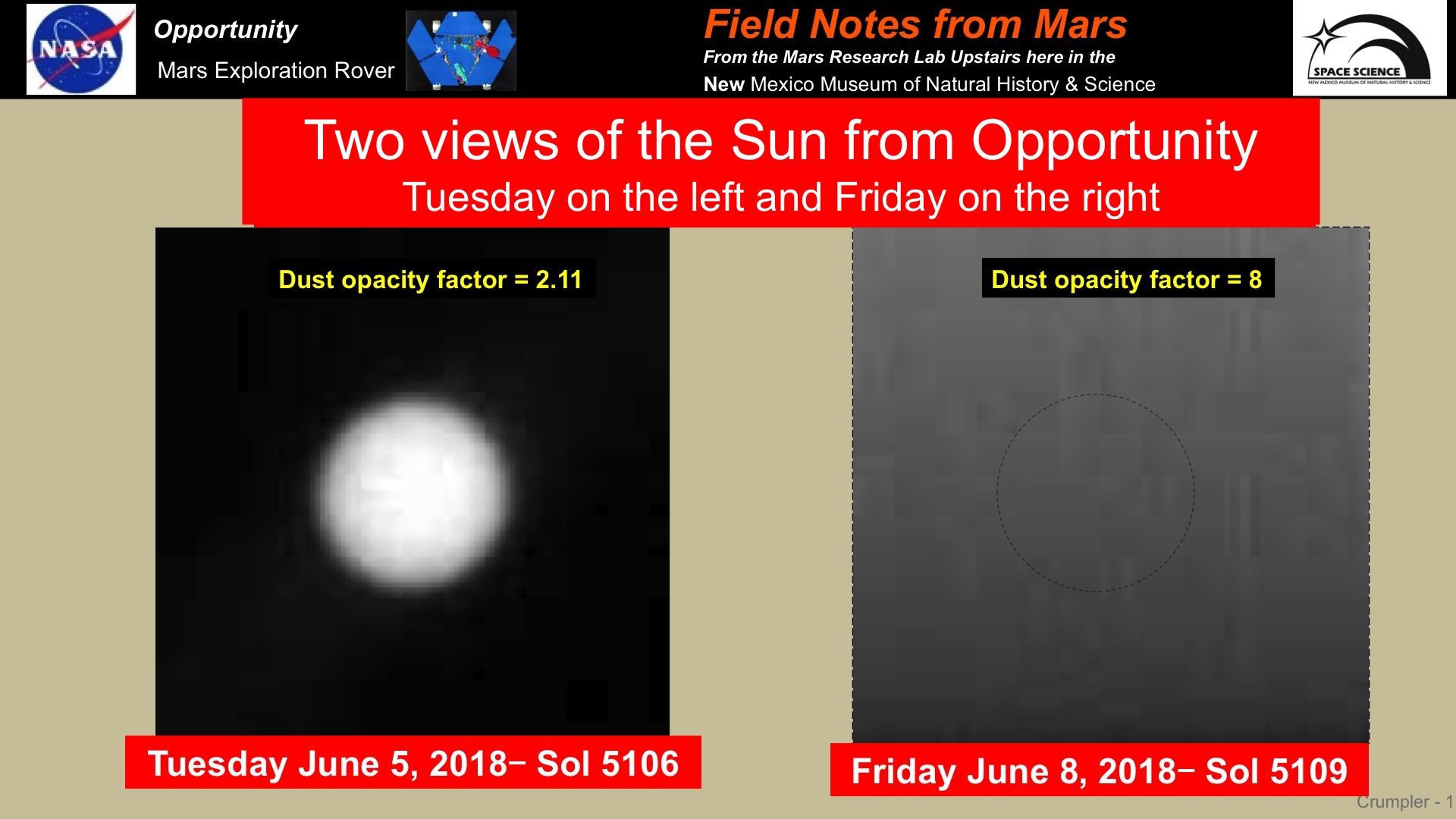 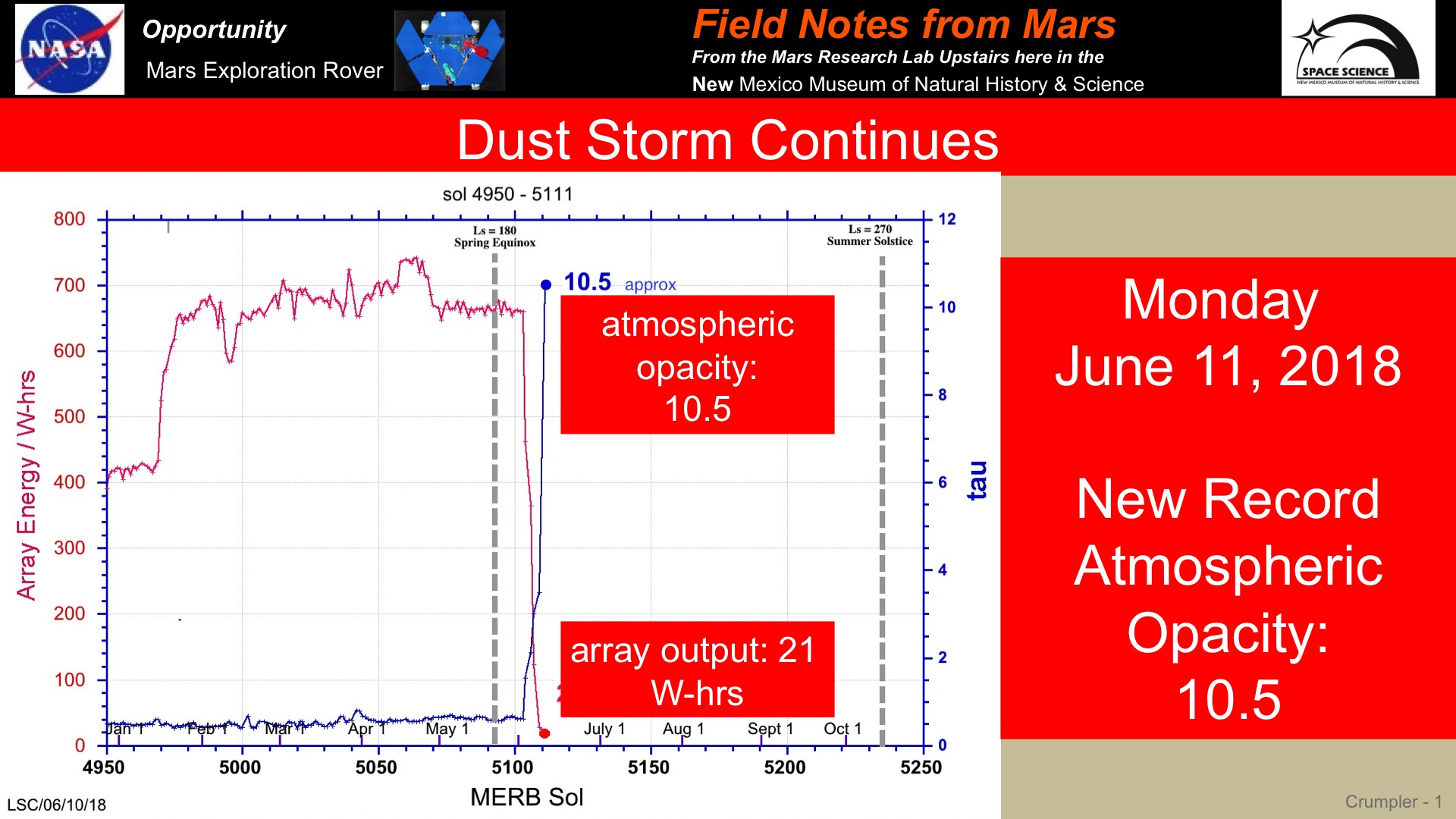 Here is a solar array power output plot that I put together on a daily basis, this one right after the last downlink on sol 5109. Right now the power output is the lowest that we have ever seen on Opportunity. Before last week the array output was close to 700 W-hrs or almsot as good as the day it landed  almost 15 years ago. In the last downlink the power was the lowest ever recorded. 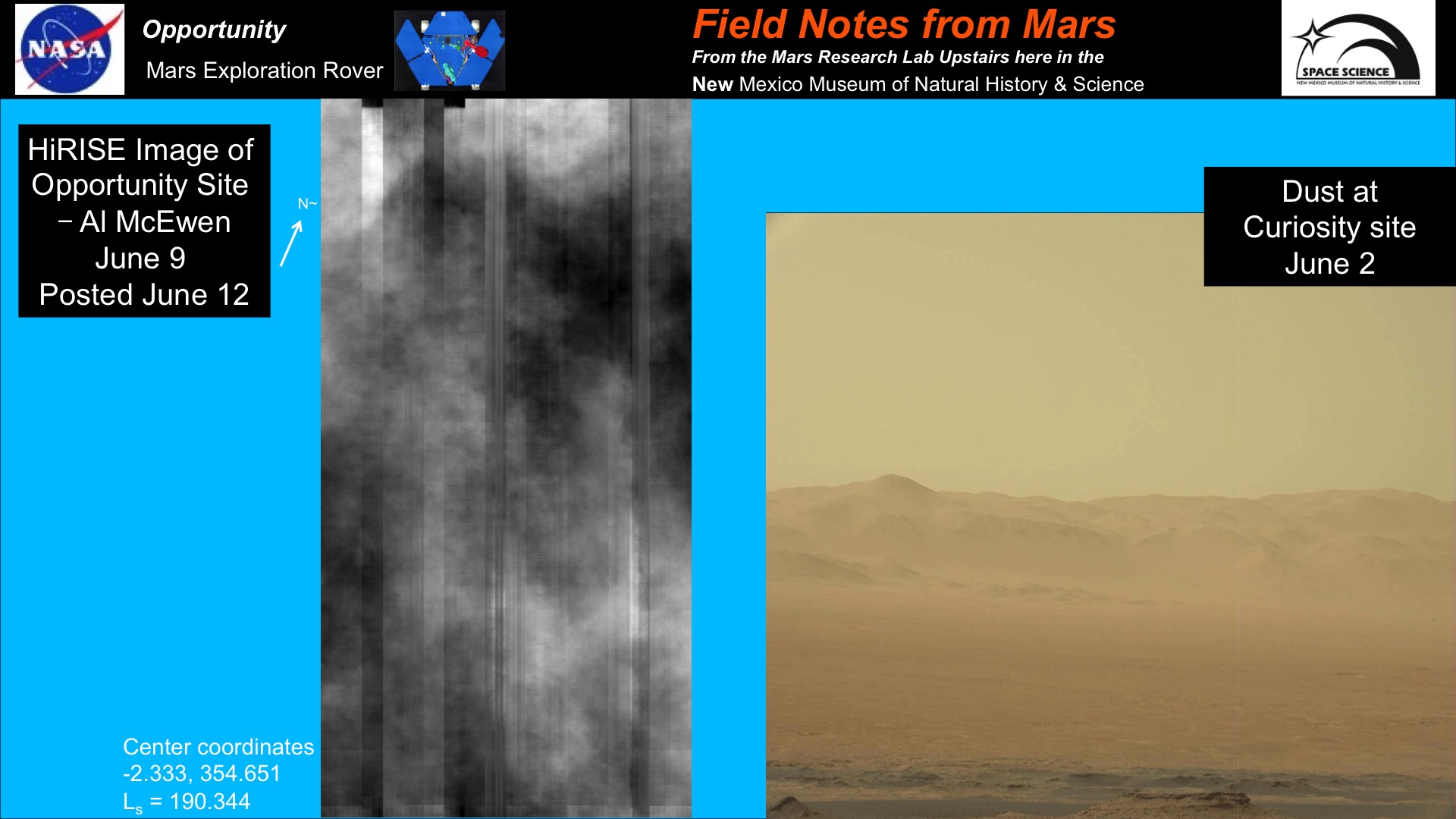 Here is what MRO/HiRISE is seeing. And even the Curiosity site is finally being affected as shown on the right. 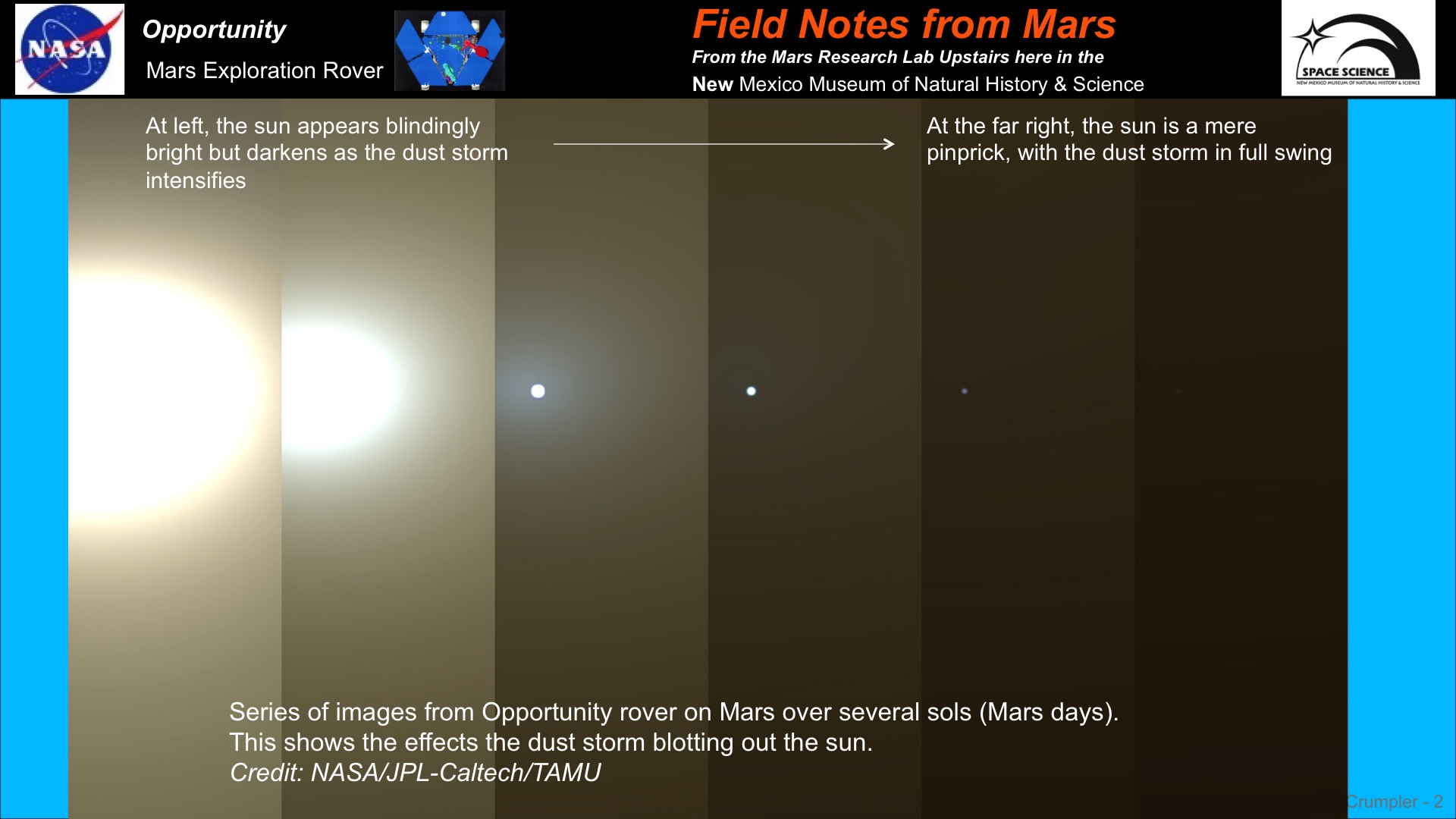 This graphically depicts how bad the dust storm is. It's dark at Opportunity right now. This series is actually a simulation using real solar images taken by Opportunity, but scaled in brightness according to actual values of opacity that were measured.

We like to keep the power up to 100 W-hrs even in the worst of winter times as a “margin” just to make certain that internal heaters can be called on if a night is particularly cold. But 22 W-hrs will not even operate basic activities, like communication with the orbital relay satellites. Following a last communication on Sunday, we have not received messages from Opportunity.  To conserve what energy it has Opportunity therefore is programmed to disconnect the batteries and go into a deep “sleep”, only running a mission clock to keep track of time. During the sleep it wakes periodically to see if there is any solar power input yet. If not it returns to sleep. In the winter this would be bad, because heaters are necessary to avoid freezing the electronics at temperature below a design limit. Fortunately, the dust storm is occurring during the beginning of Martian summer and the storm itself is acting like a blanket on the atmosphere keeping thing from getting really cold. The heaters are not expected to be needed.

So as of June 13 we expect Opportunity is hibernating (lower power fault) and will wake up after the storm passes. When it has enough power to communicate it will try to communicate during certain times of day.  Beginning June 13, the mission began to open emergency communication windows at the specified times just in case the storm passes and Opportunity tries to communicate. We do not know how long it will take for the solar energy to be sufficient because we do not know how dusty the solar panels have gotten.