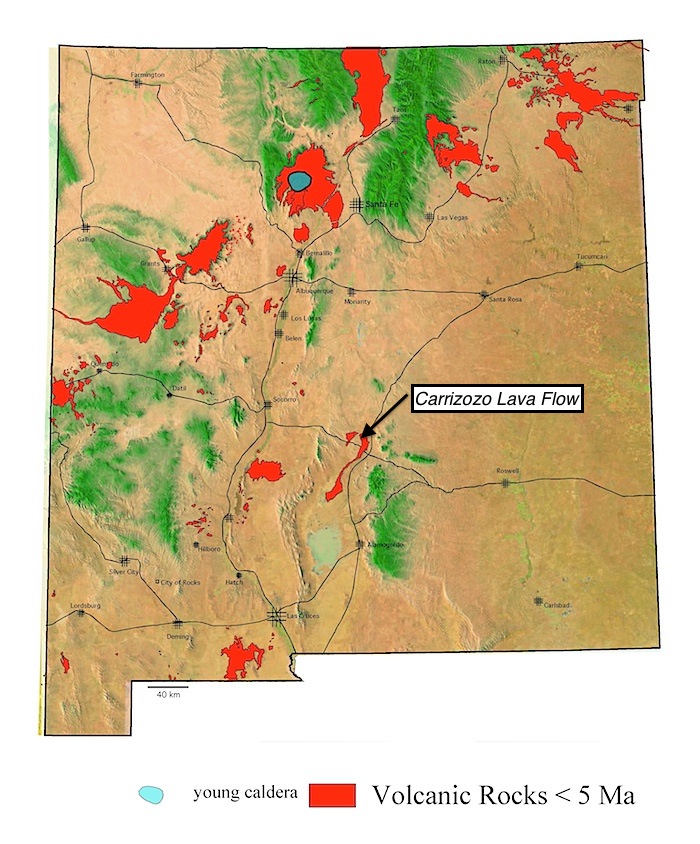 The Carrizozo flow field (Keszthelyi and Pieri, 1993) is 75 km long from the vent area to the distal margin in the Tularosa Valley (Zimbelman and Johnston, 2002). The entire flow covers ~330 km2 to an estimated thickness of 10 to 15 m, for a total estimated erupted volume of ~4.3 km3 (Allen, 1951). The lava is intermediate in composition between alkalic and tholeiitic basalt. Its location and age is consistent with the regional volcanism elsewhere that is fundamentally associated with the Rio Grande rift (Renault, 1970; Faris, 1980; Anthony et al., 1998). Various researchers (e.g., Anthony et al., 1998; Dunbar, 1999) have distinguished between upper and lower Carrizozo flow units, separated by a narrow “neck” in the medial reach (Keszthelyi and Pieri, 1993). However, chemical analyses to date have revealed no evidence for distinct differences between the upper and lower lavas. Cosmogenic (isotopic changes induced by exposure to high energy particles) studies indicate exposure ages of 4800 yrs (Anthony et al., 1998) to 5200 yrs (Dunbar, 1999) for the Carrizozo flow field. These results make the Carrizozo flow field the second youngest volcanism in New Mexico (Anthony et al., 1998), after only the McCartys flow field in western New Mexico. 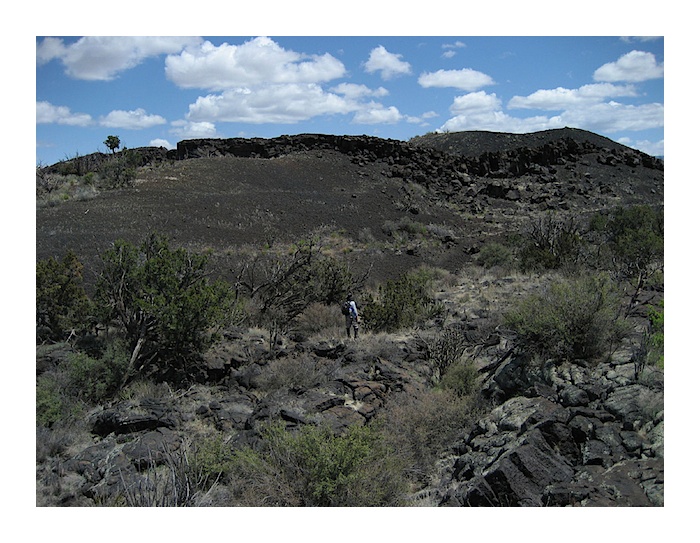 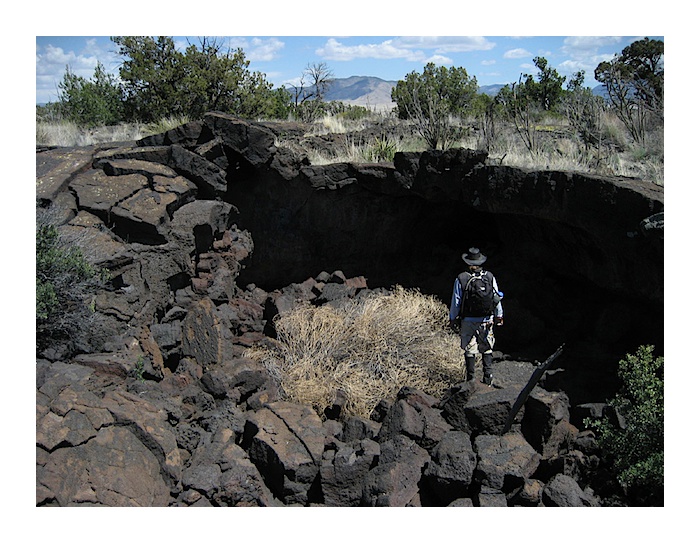 A few skylights occur in lava tubes along the traverse from the margins of the flow to the vent area (Little Black Peak).  Photo: J. Zimbelman 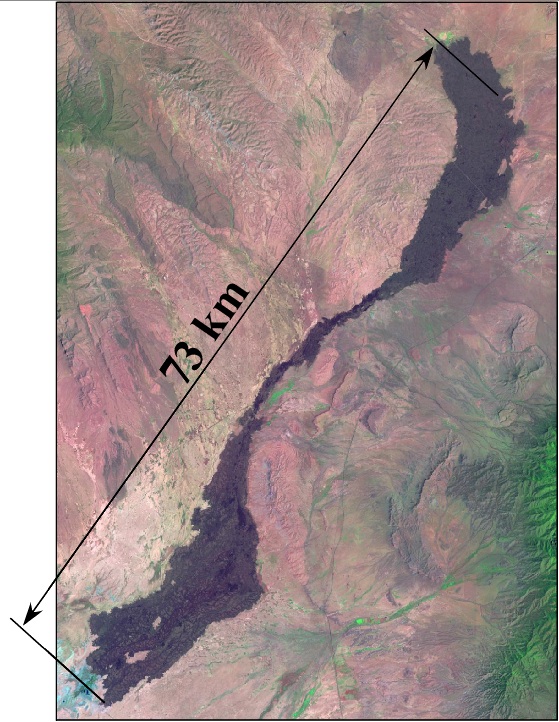 The Carrizozo lava flow field extends from its source a few kilometers north of the current Highway 380 southward to the extreme northern end of White Sands. Most of the flow south of Highway 380 lies within the White Sands Missle Range. It appears to be one giant flow, but the flow field really consists of multiple small lobes of lava that flowed side by side down the floor of the valley. As a result the surface of the lava flow where the highway crosees actually slopes up to the west. In other words, each flow stacked against previous flows on the slopes on the valley floor and stair-step their way up slope. 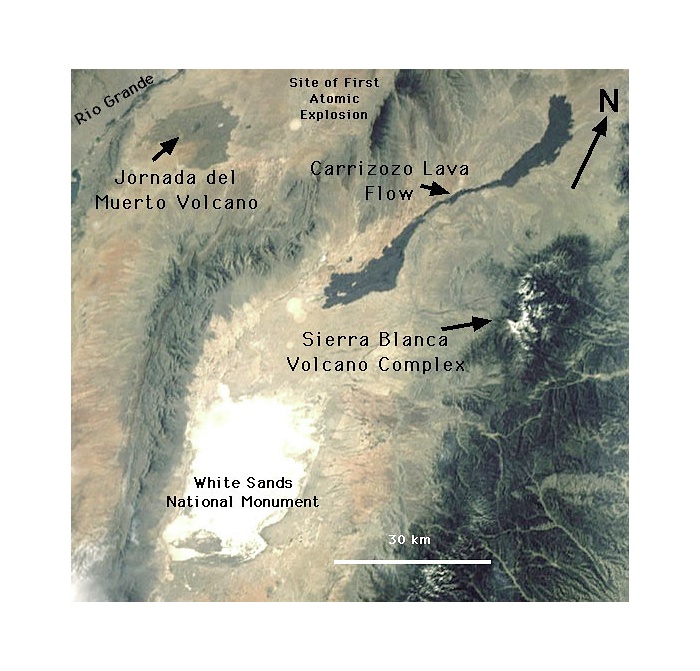 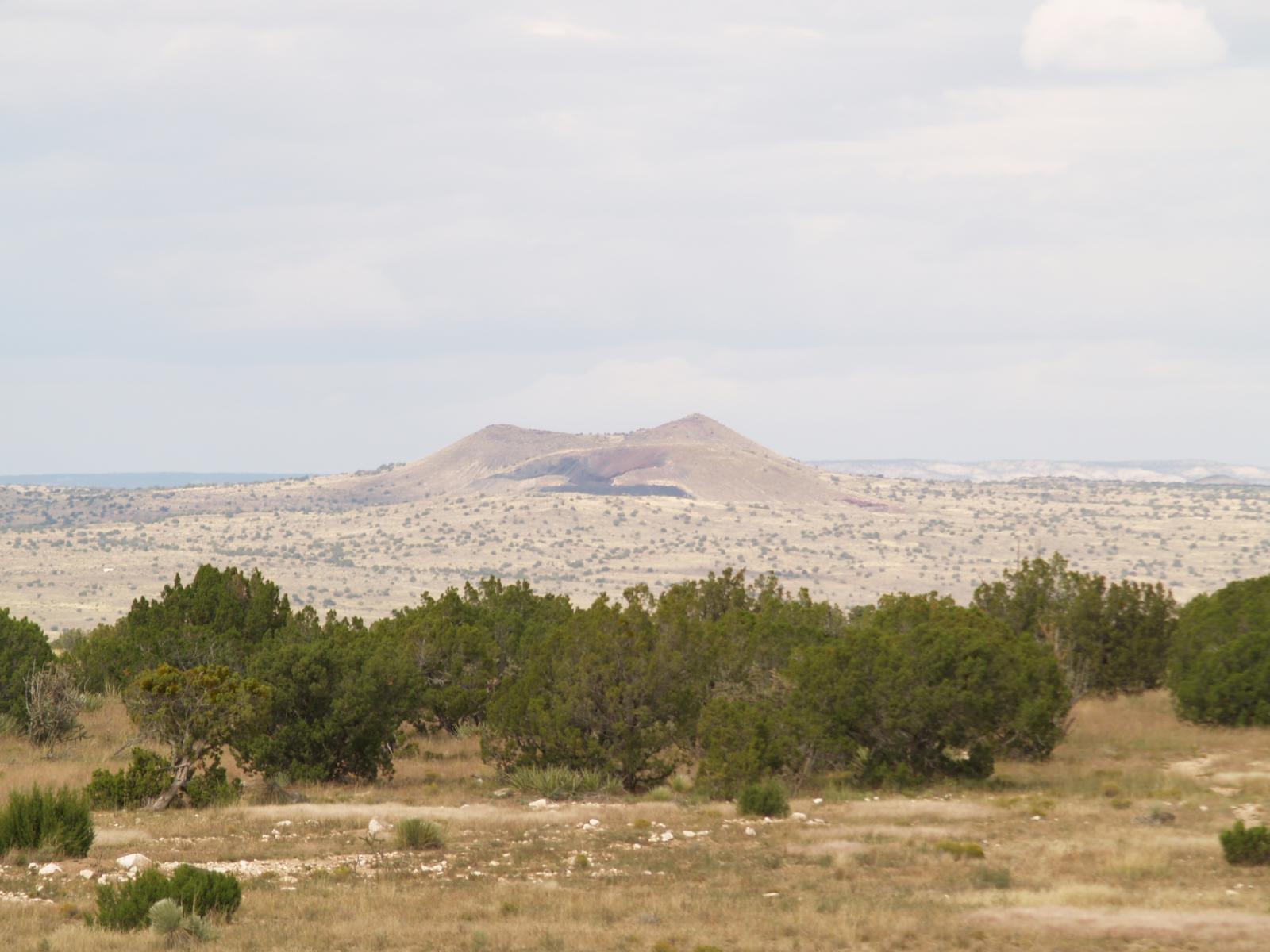 A few miles east of the vent for the Carrizozo lava flow field is a small area of older lava flows that are generally included in any discussion of recent volcanism in this area. Two scoria cones occupy the source area, Broken Back Craters. This is  a view from the highway looking approximately northwest toward the main cone.