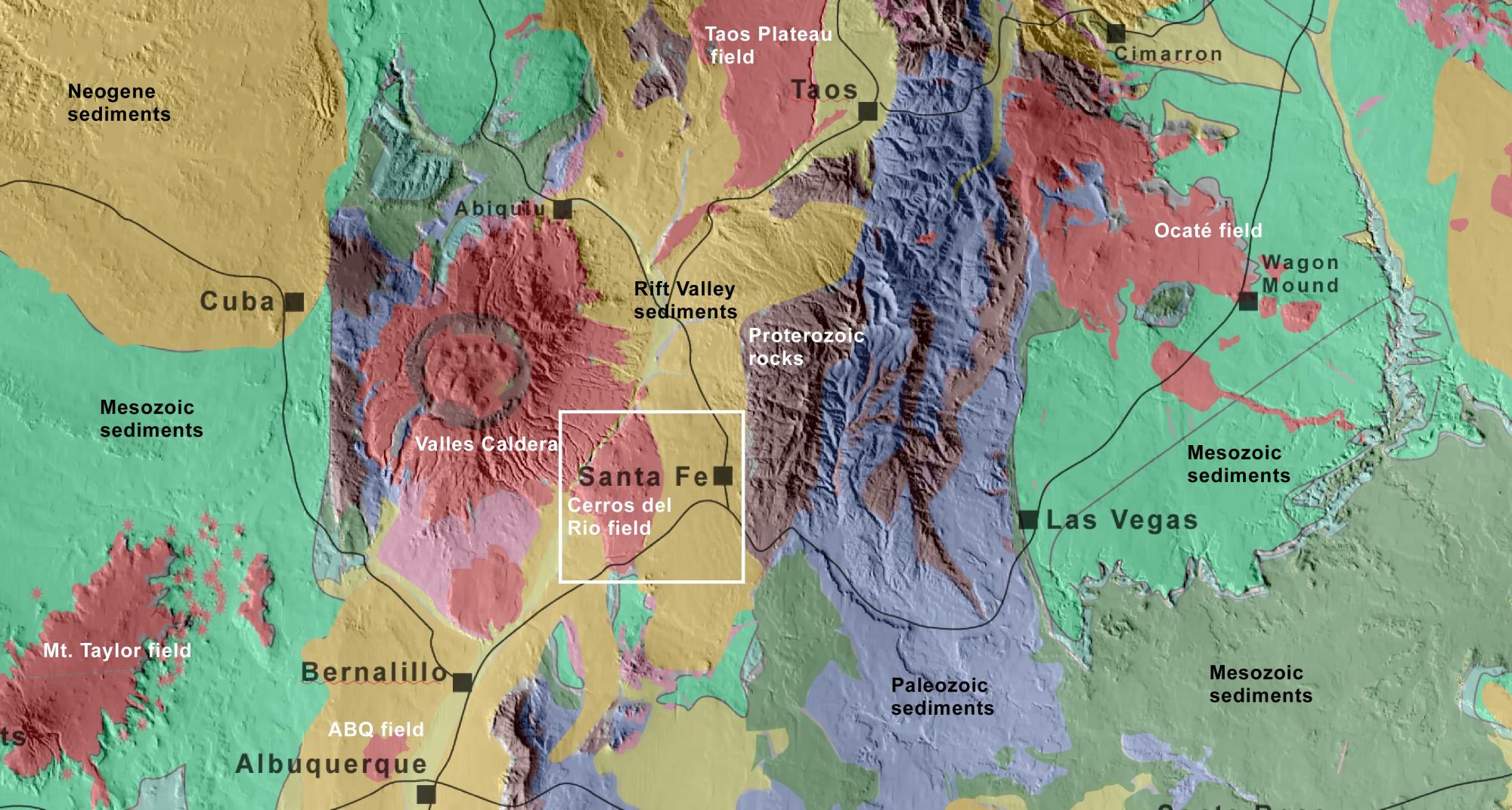 The Cerros del Rio Volcanic Field is one of many volcanic fields in northern New Mexico. It lies within the Rio Grande rift and has been cut by the Rio Grande. The canyon that resulted, White Rock Canyon, was too steep, rocky, and narrow for early travelers. Hence early colonists were forced up and over the land south andeasts of the Cerros del Rio volcanic field much as Interstate Highway 25 does today.

"The Santa Fe Volcanic Field" (or so it should be named) 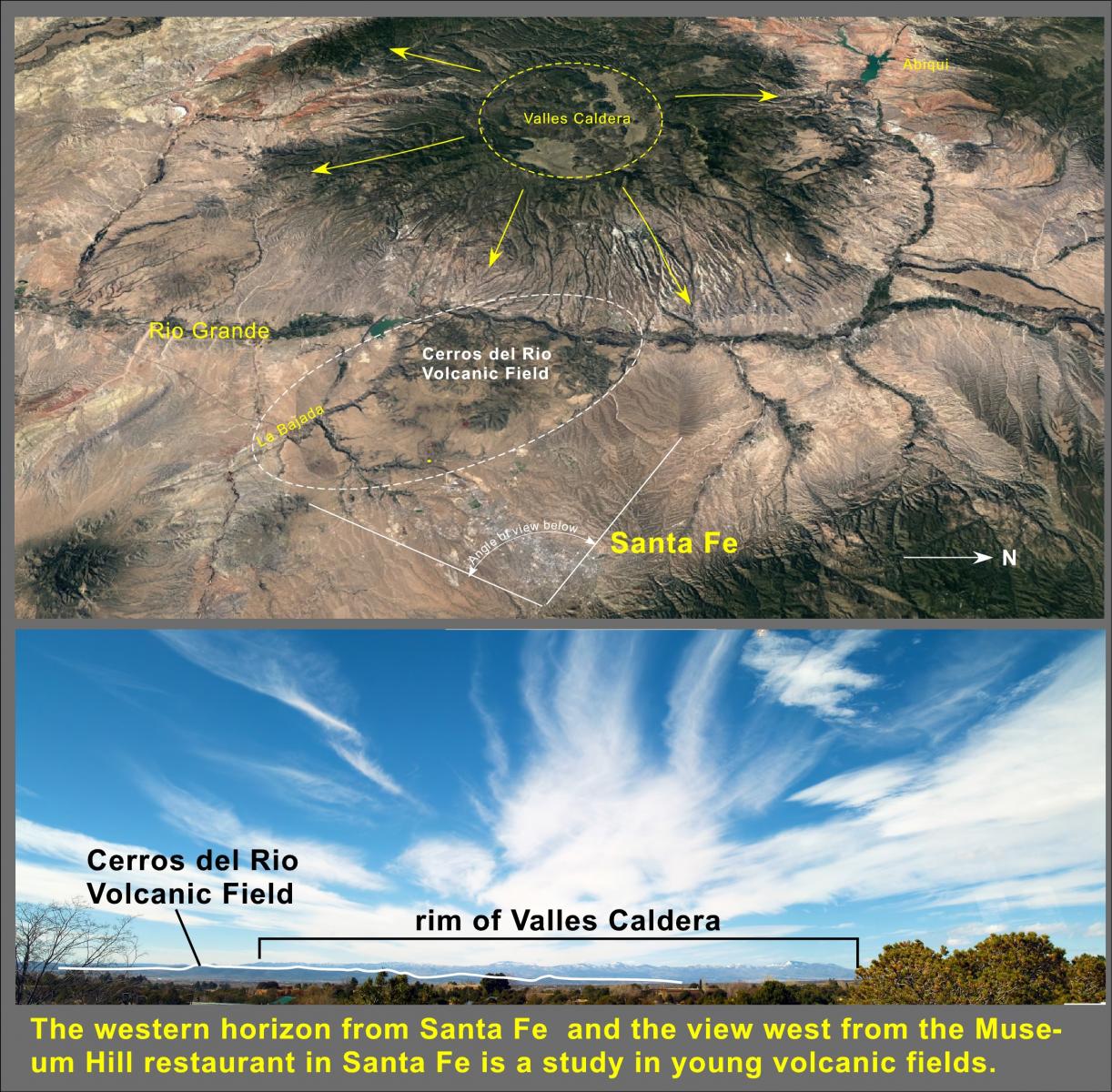 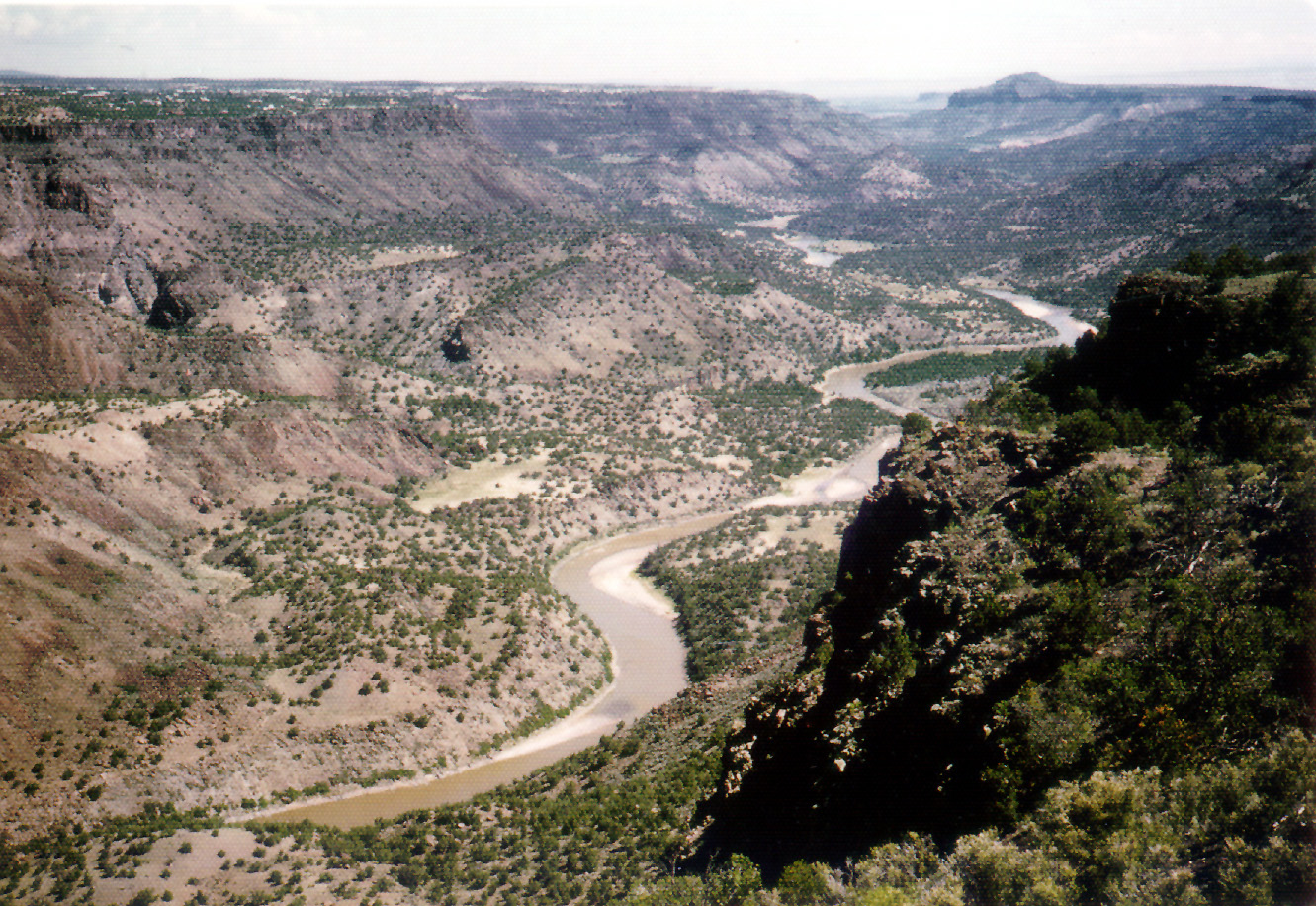 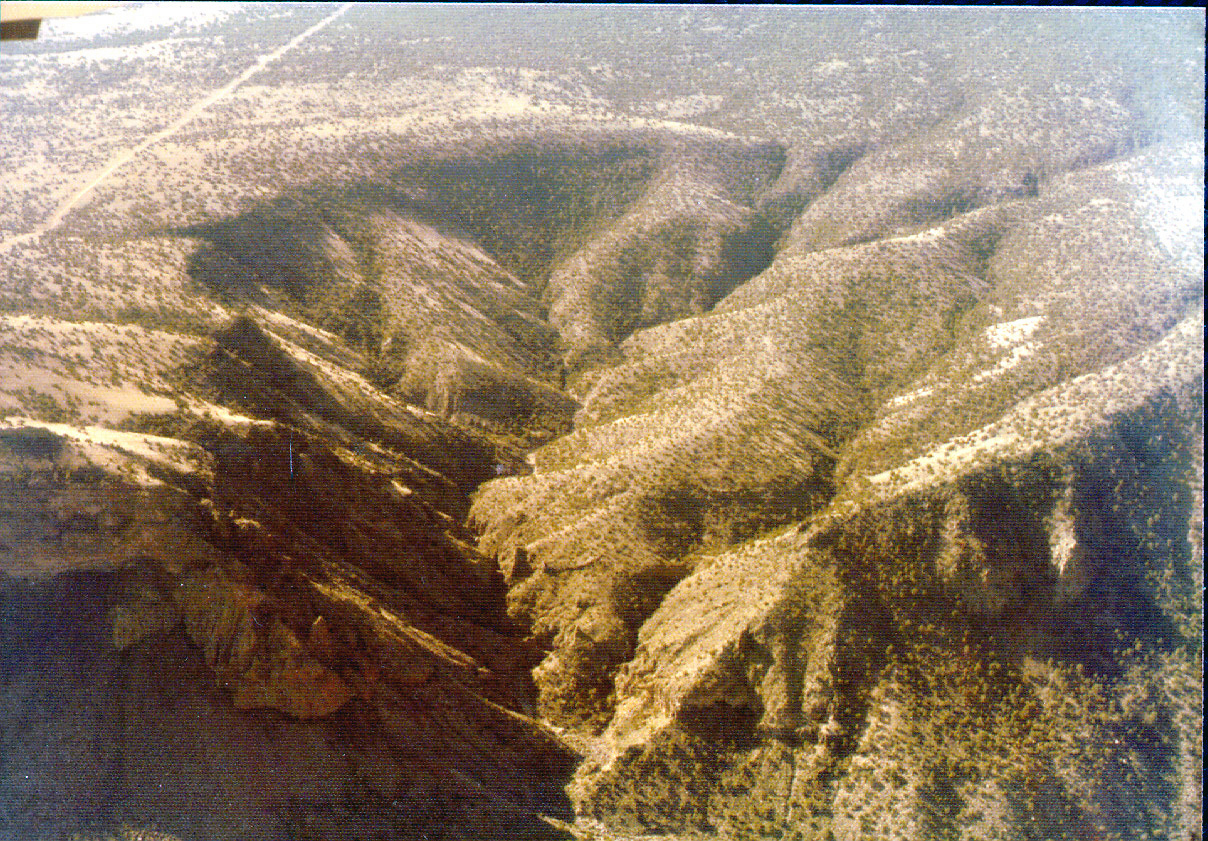 Montoso maar is an unusual exposure created when a side canyon off of White Rock Canyon encroached through the center of the maar. As a result, one can stand on the deposits of blocks and ash forming the crater rim, yet descend into exposures of the upper one hundred meters of the same maar by walking down the canyons. Photo J. Aubele 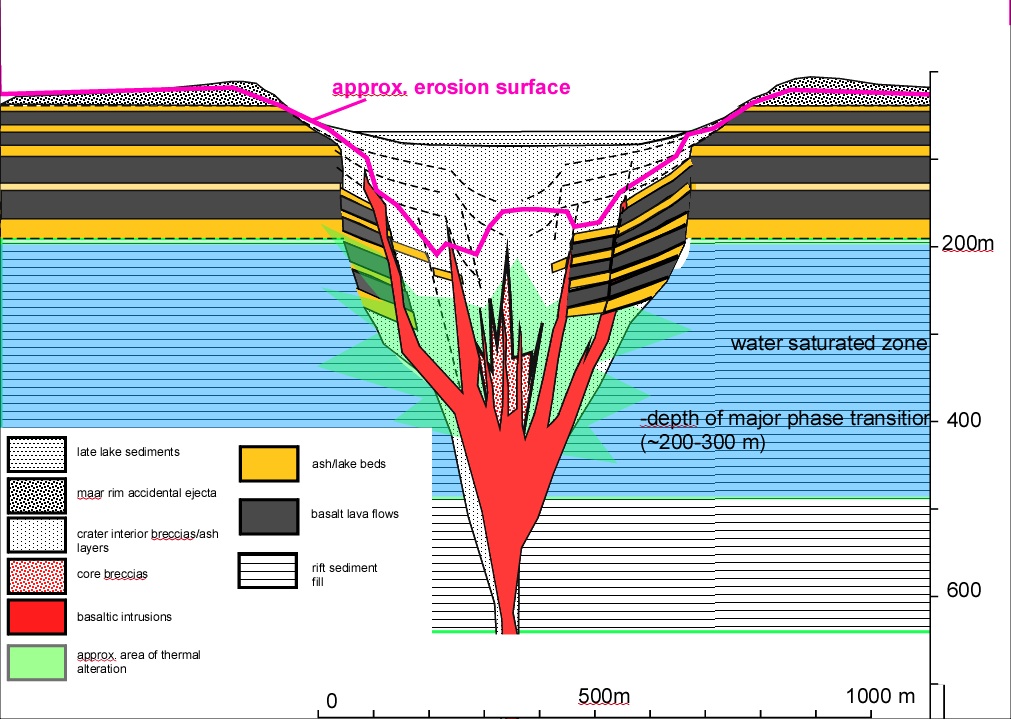 Schematic cross section of Montoso maar. Some of the tuff breccias within the lower crater floor are spectacularly exposed along the canyon walls. 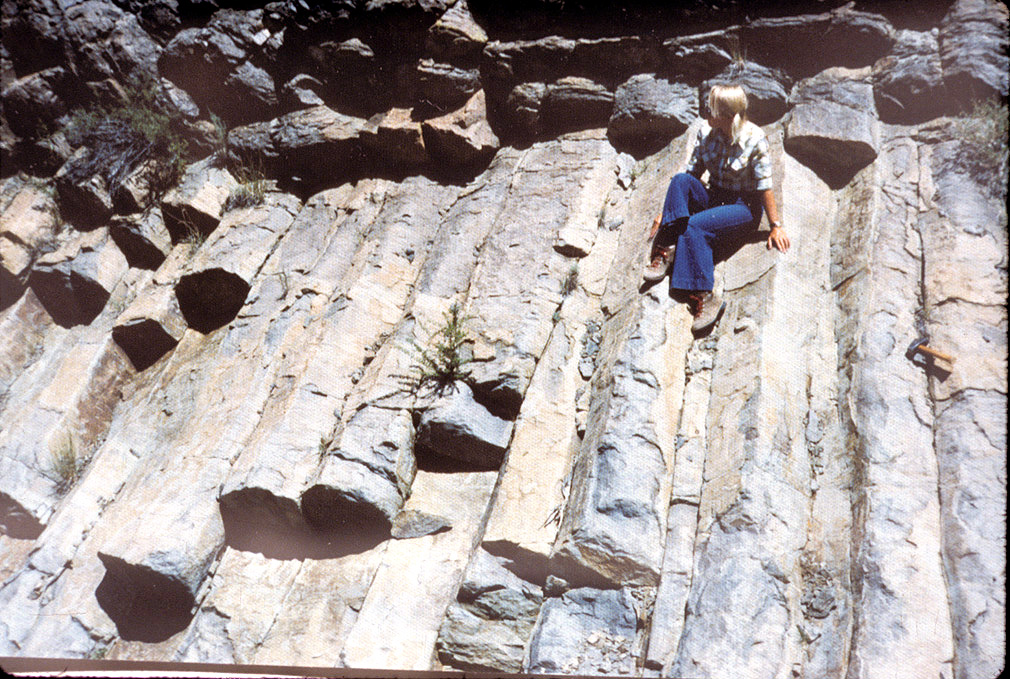 Columnar joints in an intrusion in the floor of the Montoso maar. 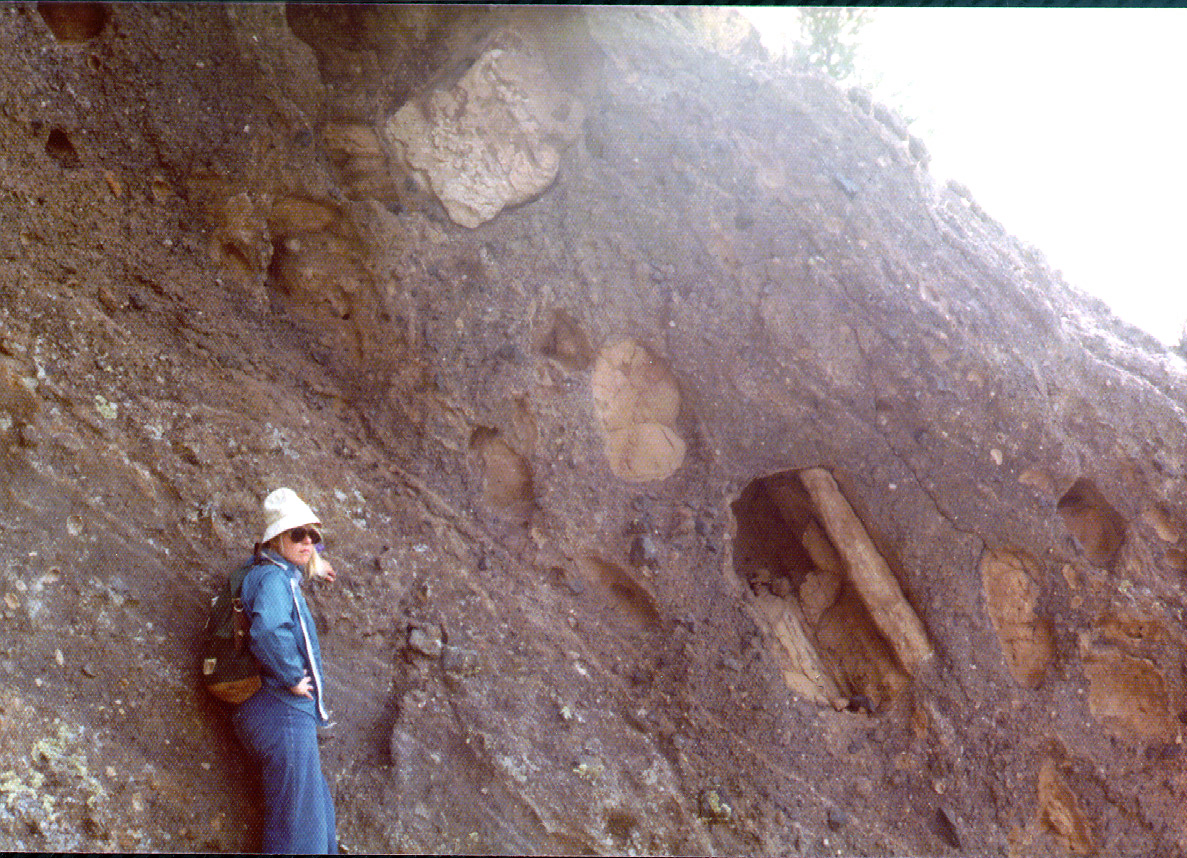 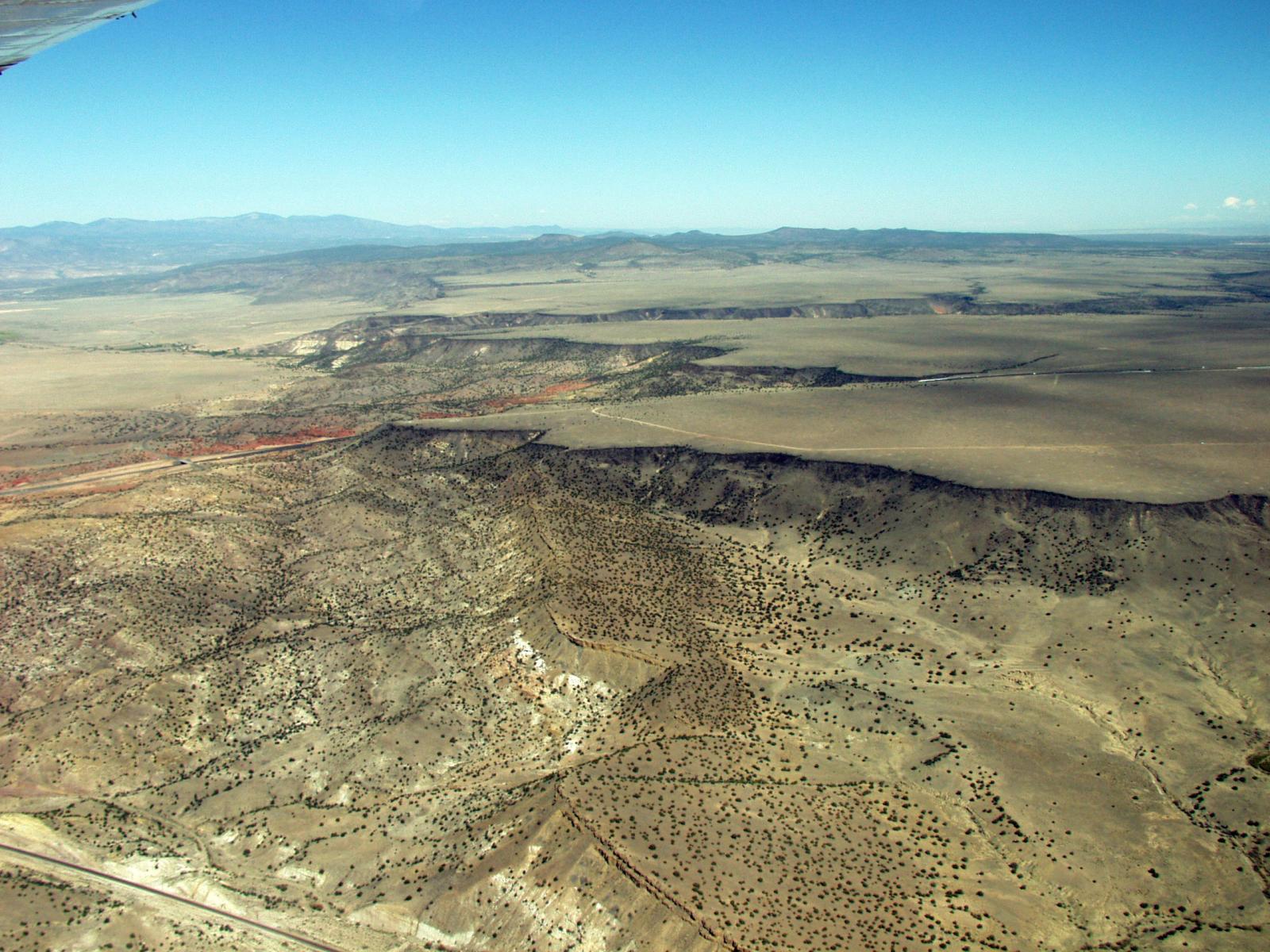 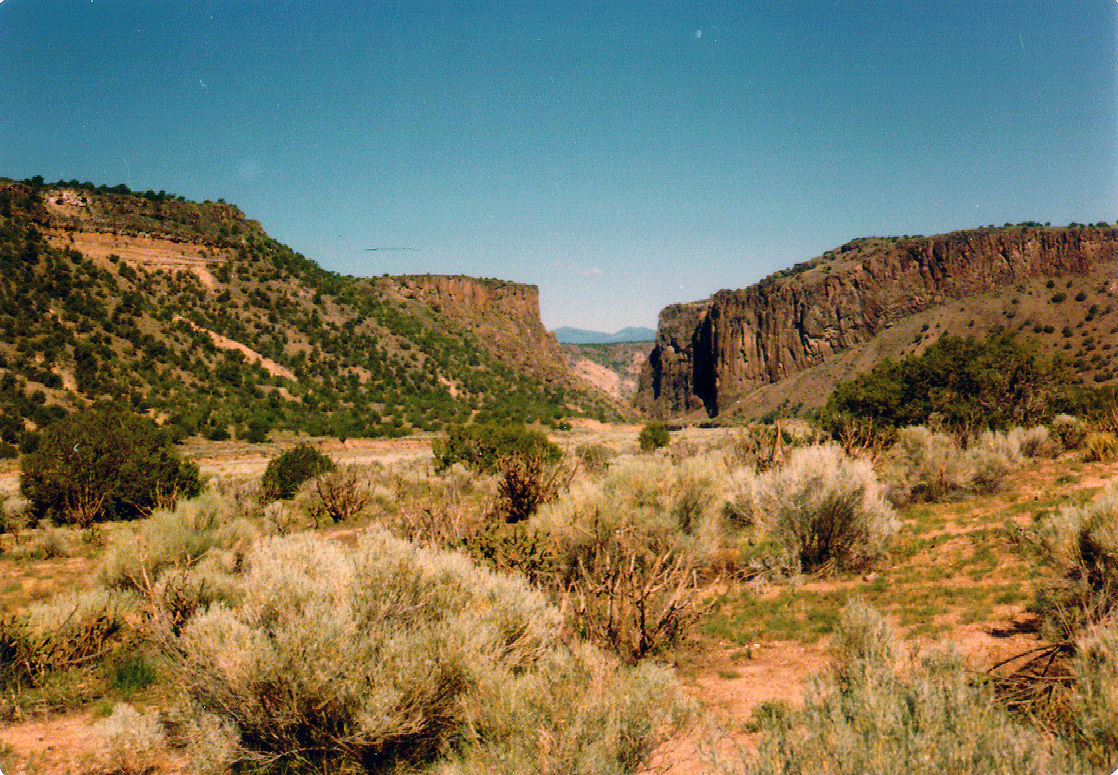 The Ceja Box or Buckman Mesa road area is a section of ponded lava flows several hundred feet thick at the northern end of the Cerros del Rio Volcanic Field. It is a famous locality for some movies. Here a major arroyo cuts trhough the volcanic field and enters the Rio Grande, cutting a beautiful section of the field. Photo J. Aubele 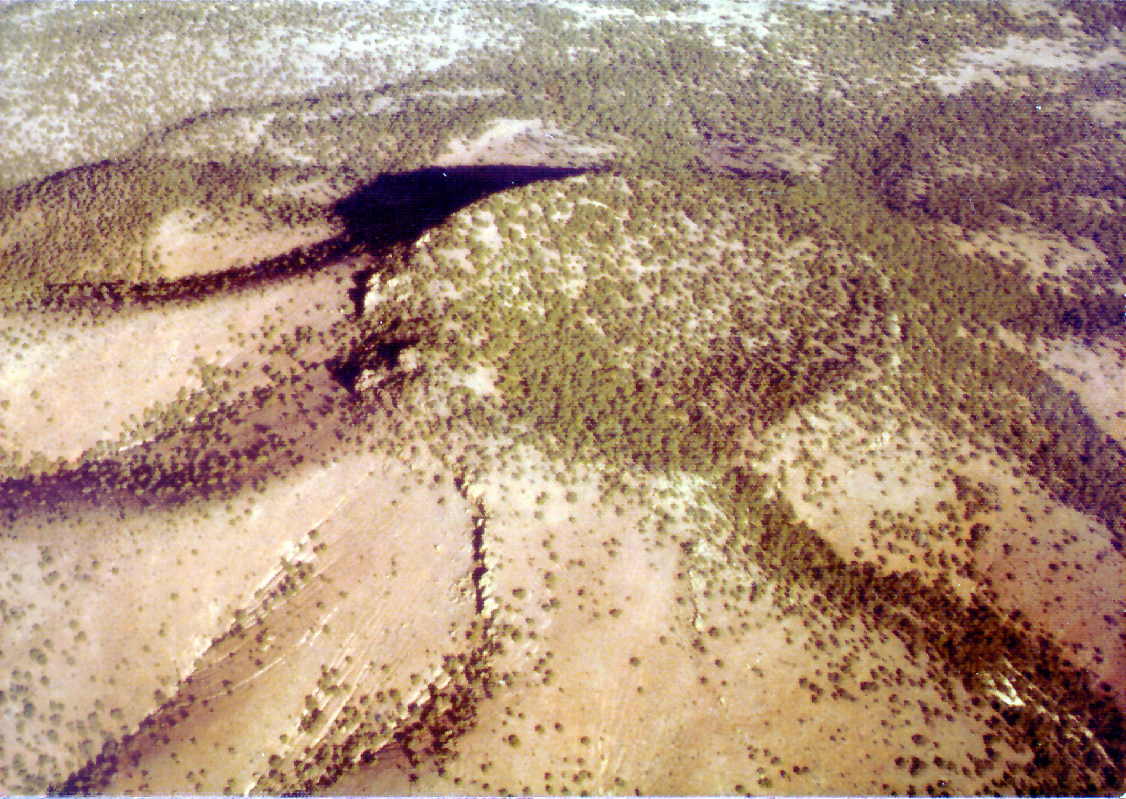 Inward-dipping aglomerates rim the summit structural crater of Cerro Colorado, one of the larger scoria cones in the Cerros del Rio field. The field is an extensive "forest" of piñons and junipers. Photo J. Aubele 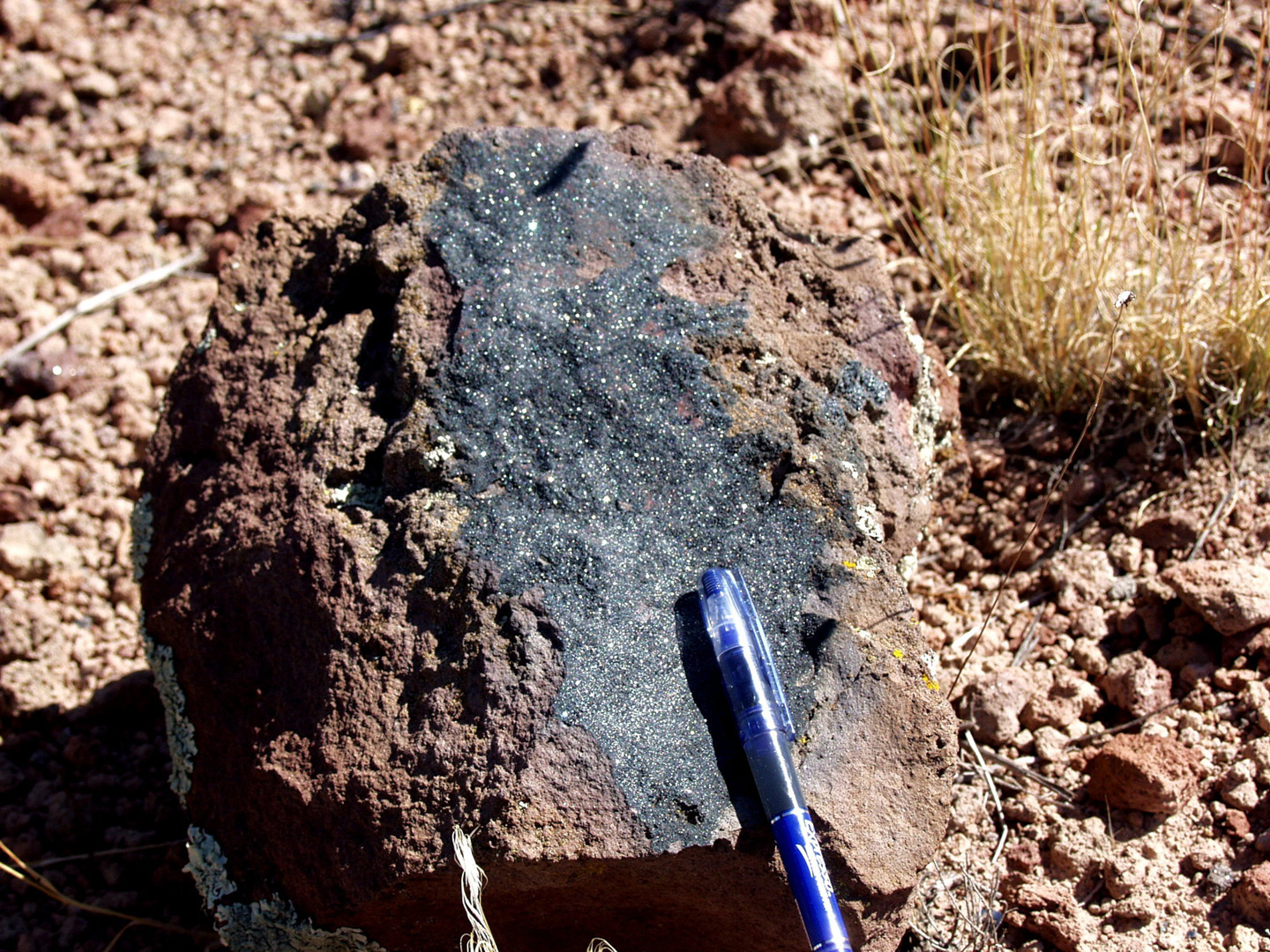 Scoria on one of the cones is encrusted with specular hematite.  Photo J. Aubele

At the south end of the volcanic field, not far from the Santa Fe airport, there is an area of ash-covered camel tracks. The dark scoria in the background post-dates the tracks, so these are the tracks of a camel that passed through around 3 million years ago, probably in the damp ash fall materials of a nearby maar. 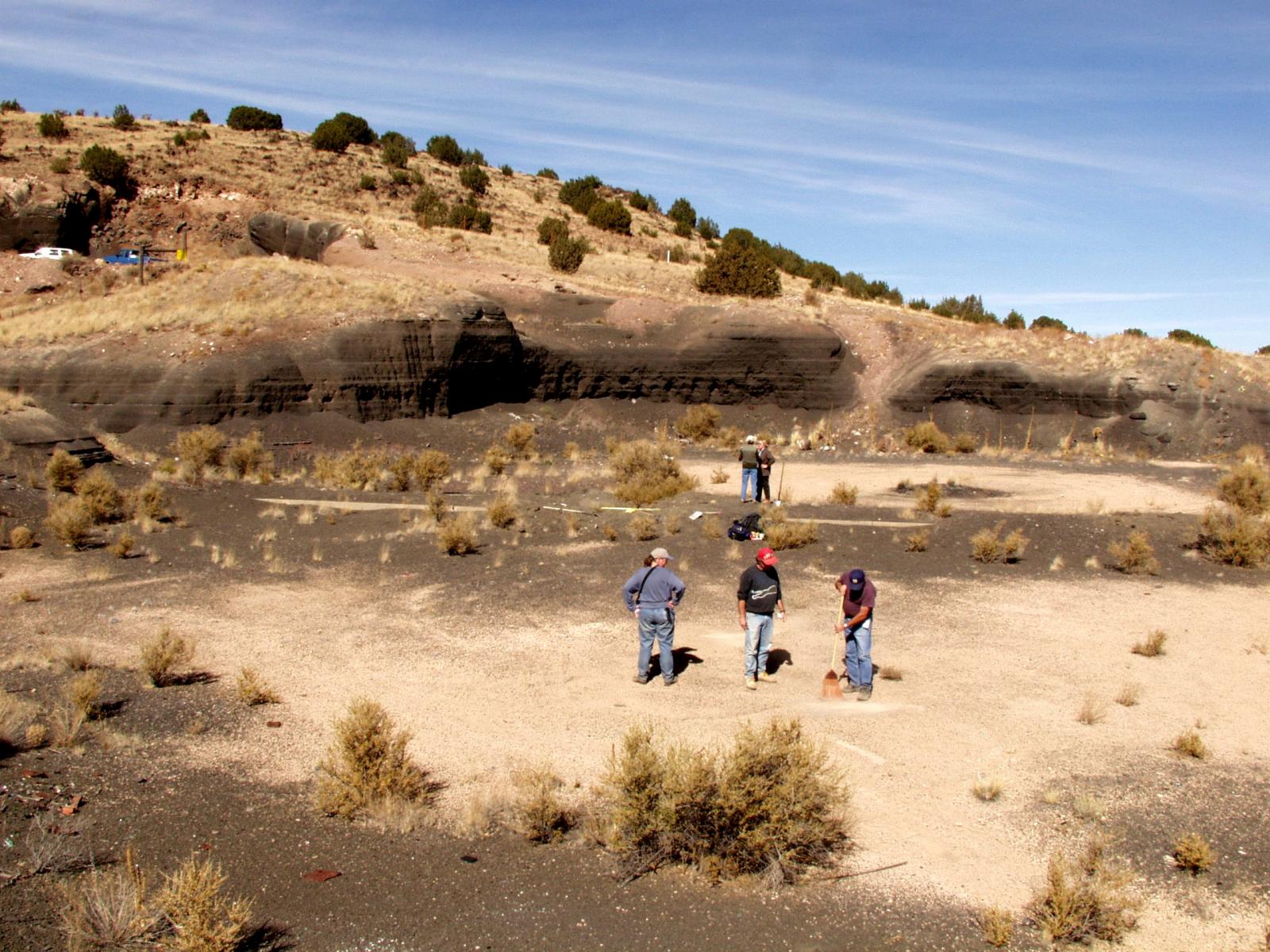 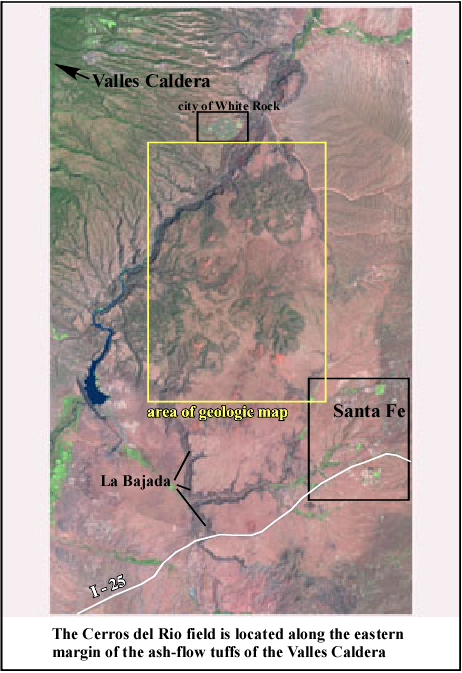 The volcanic field represents the younger of a series of three extended time period over which mafic volcanism pre-date the silicic eruptions leading up to Valles Caldera formation. ranging from alkali basalt to andesite. Most of the eruptive volume  occurred  the 2.3-3.2 (Baldrige, 2004). Eruptions consisted of alakli basalts and transition high alkali intermediate or andesitic compositions. Andesitic eruptions are relatively low in volatiles such that flows are thick and originate from vents with very small pyroclastic centers. The volcanic rocks thicken towards the Rio Grande implying that the volcanism was contemporaneous with downcutting of the river through the accumulating volcanoclastic sediments.  Maars, originally identified during mapping of the field, are common, including a half-sectioned example (Montoso maar). 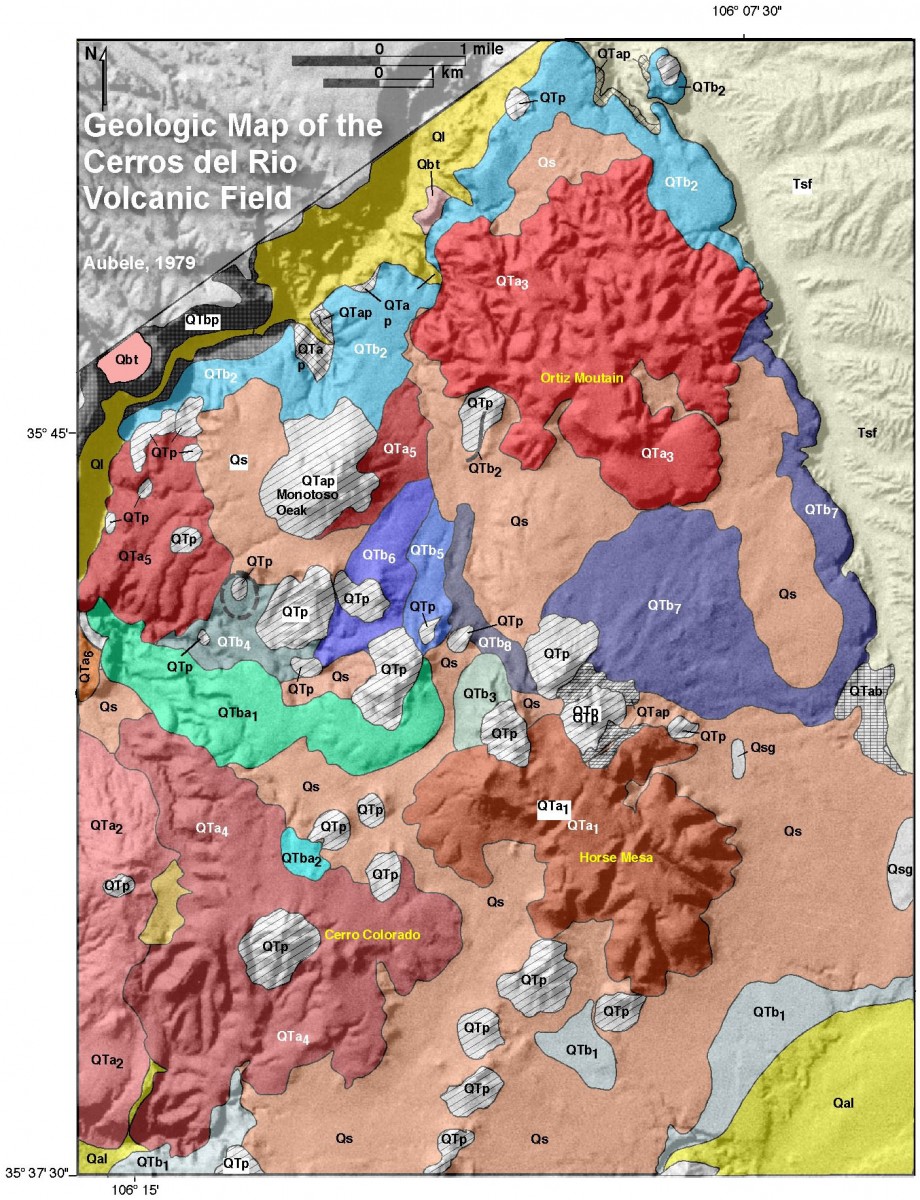 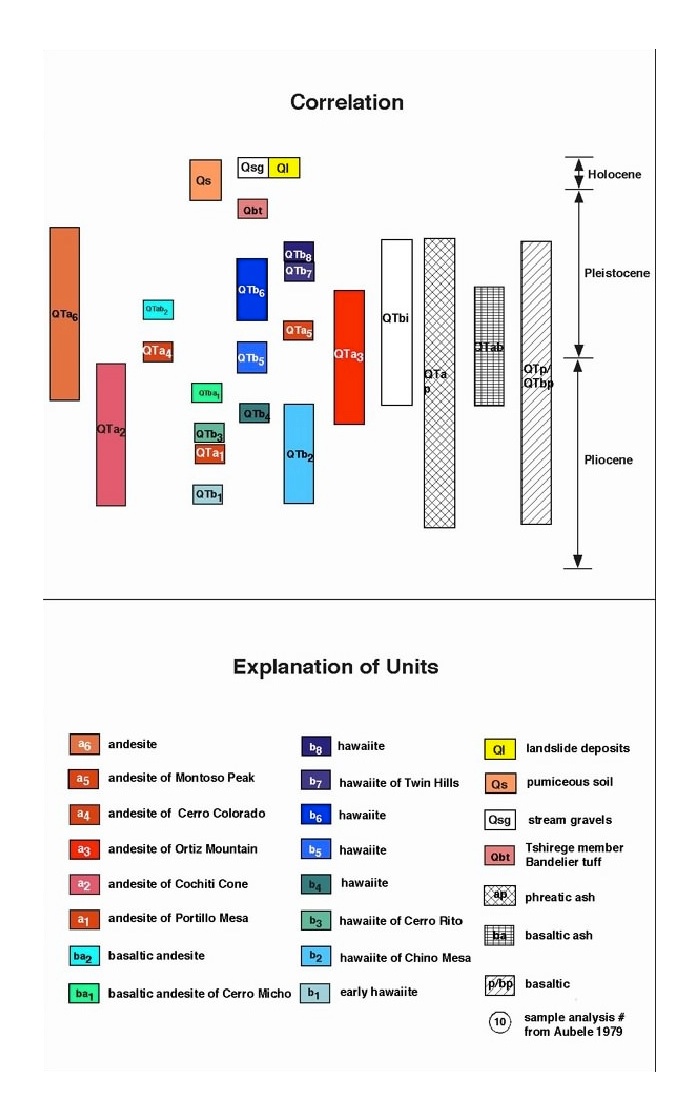 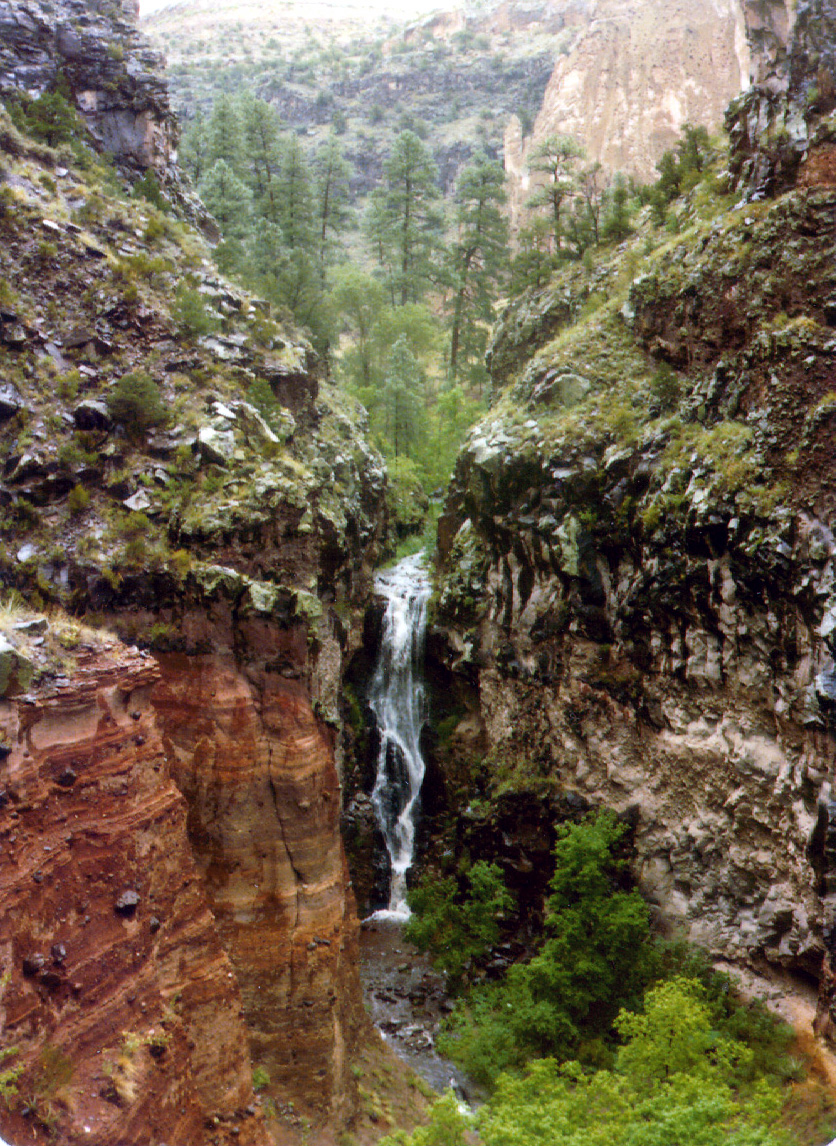 Frijoles Canyon on the west side of the Rio Grande at White Rock Canyon cuts through a sequence of massive phreatomagmatic  and volcanoclastic deposits.

Manley, K., and Mehnert, H. H., 1981, New K- Ar ages for Miocene and Pliocene volcanic rocks in northwestern Espanola basin and their relationship to the history of the Rio Grande rift: Isochron/West, no. 30, p. 5-8.