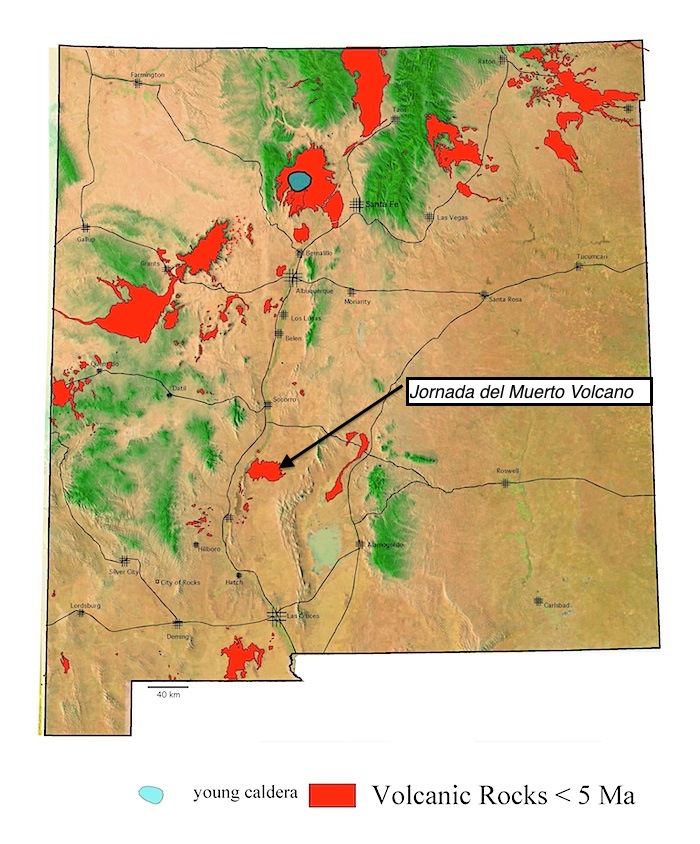 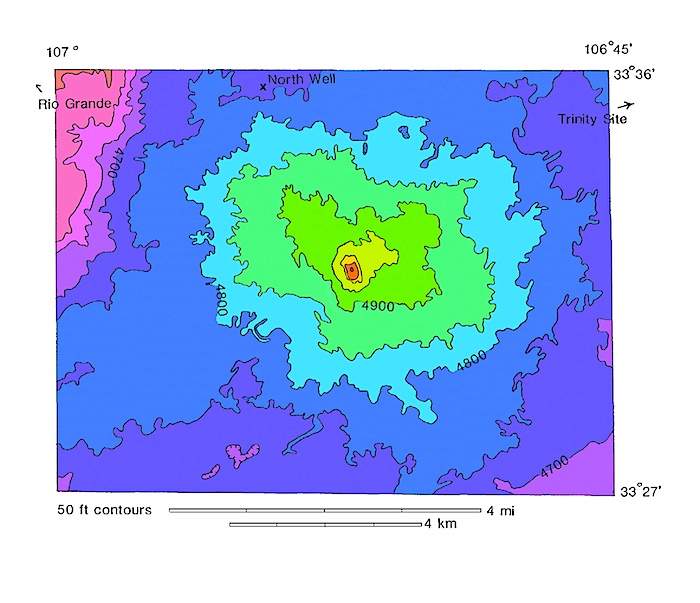 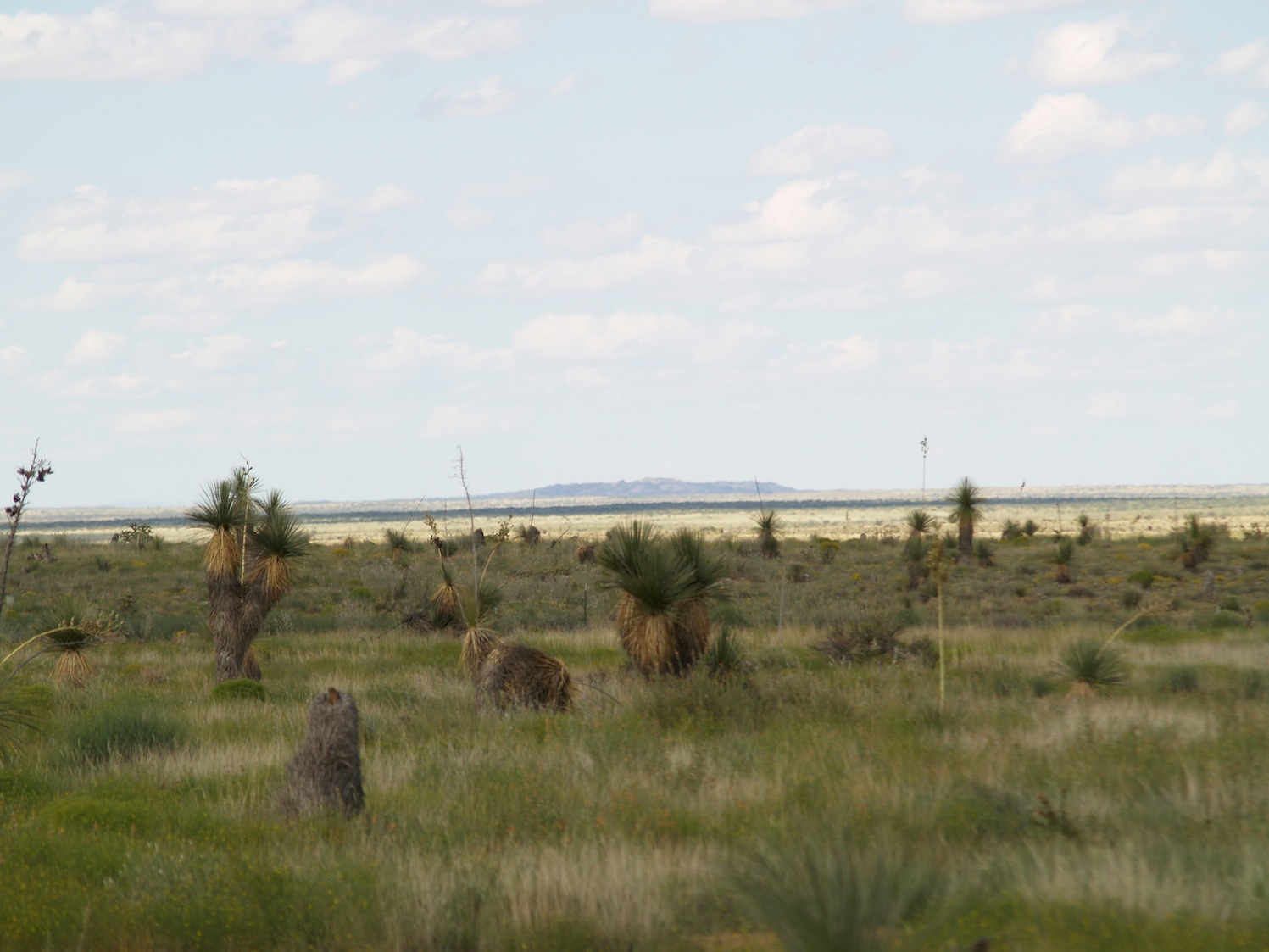 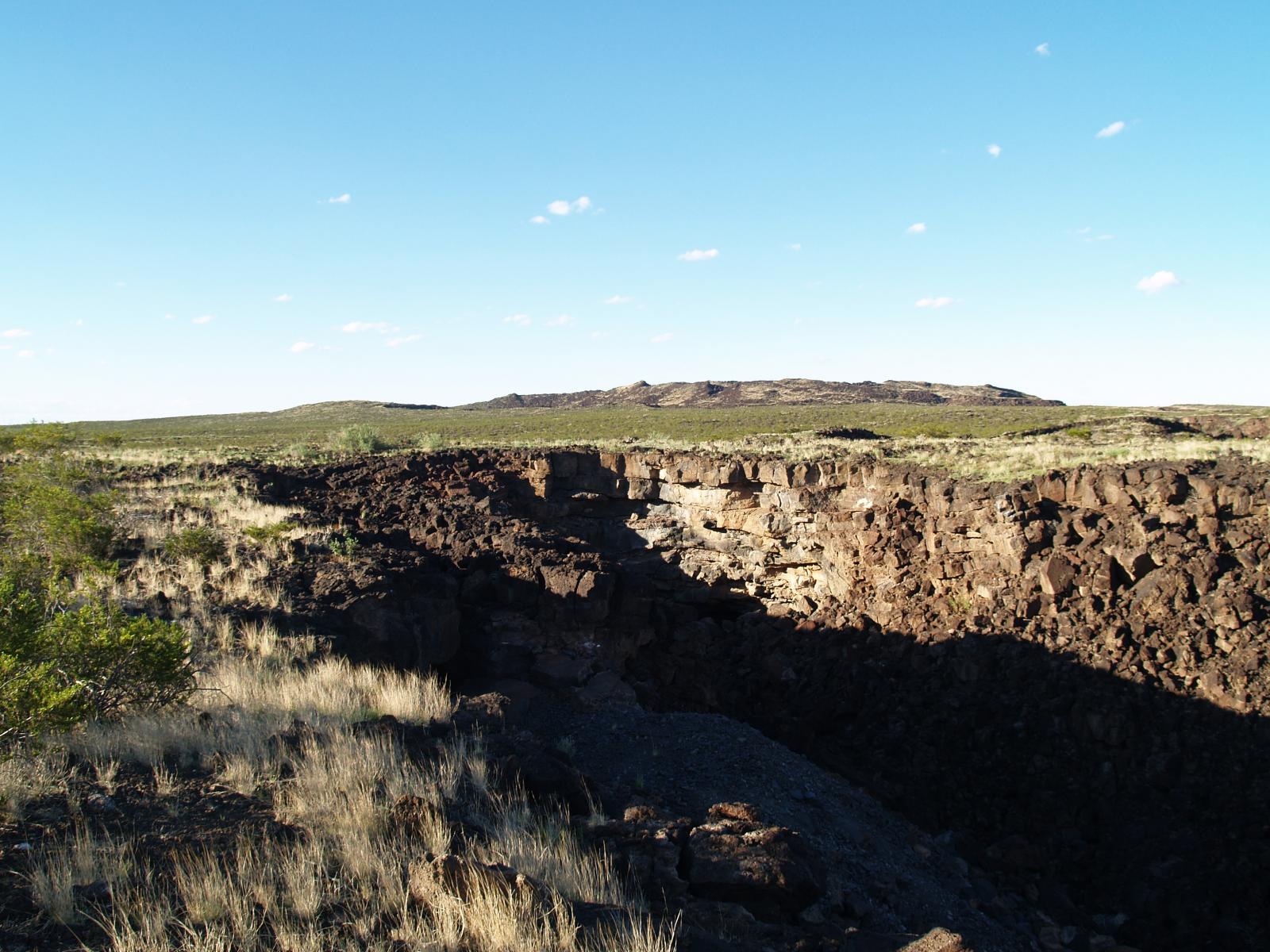 View of the central vent platform from the southern lava tubes. The lava tubes here are the site of one of the Southwest's great mass nightly bat flights. Photo, L. Crumpler

The Jornada del Muerto (the modern idiom for the Medieval Spanish would be “Dead Man‘s Route”) was not always unvisited. For two hundred years after the first permanent Spanish settlement in 1598, most of the movement along the Camino Real de Tierra Adentro between Mexico City and the interior of Nuevo Mexico passed through the valley just to the west of this lava flow. Today it is about as remote as any place in New Mexico.  It lies on the western edge of the White Sands Missile Range and was illuminated in 1945 by the world’s first atomic explosion in the valley to the immediate east.

About 760,000 years ago lava flows spread out over 170 square miles (440 square kilometers) of the central Rio Grande rift valley. Before the eruption finished many years later about 13 cubic kilometers of basaltic lava had accumulated, about the same volume as the Laki fissure eruption that occurred in 1783 in Iceland. The total volume is  greater than the much younger McCartys (El Malpais) and Carrizozo lava flows by a factor of two, so the Jornada accumulation ranks among the larger of the geologically young basaltic eruptions on Earth.

Technically-speaking, the whole field is a volcano or, more specifically, a shield volcano. The topographic relief in the accompanying map shows that the surface is built up to a central platform with lava flows sloping radially away for 360 degrees around the central vent, the basic physiographic definition of a volcano. Primary surface features of the lava flows are relatively well-preserved for their age due to the arid environment. 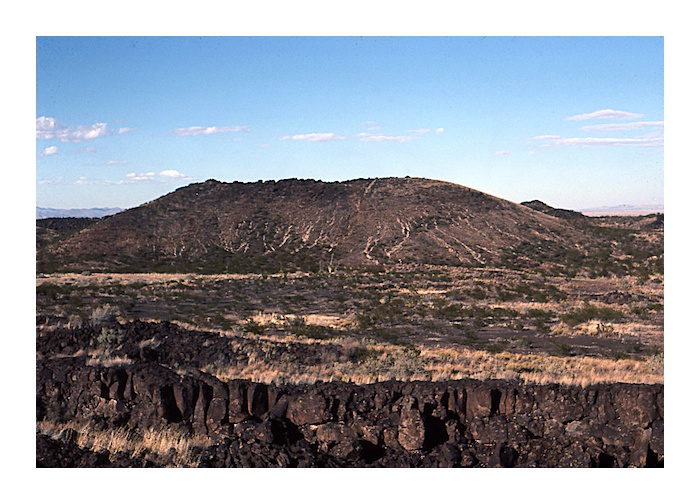 The central volcanic vent from which the lavas erupted consists of an unusual raised elongated platform of basalt surmounted on the northern end by a small cinder cone. From a distance the profile of this platform resembles a squat cone, the flat-top of which is a little over one-quarter mile (0.5 km) in width. The platform consists of relatively smooth lava surface that is broadly down-sagged toward the center and broken here and there by abrupt escarpments and cracks. The outer edge of the platform is surrounded by a wide moat-like crack and outward-sloping sheets of basalt that form a rampart sloping down to the surrounding lava surface. Other large lava flows in New Mexico exhibit this type of platform type morphology in the vent area include the McCartys lava flow and El Tintero volcano. The Jornada vent is an unusually inaccessible example of this type of  structure. 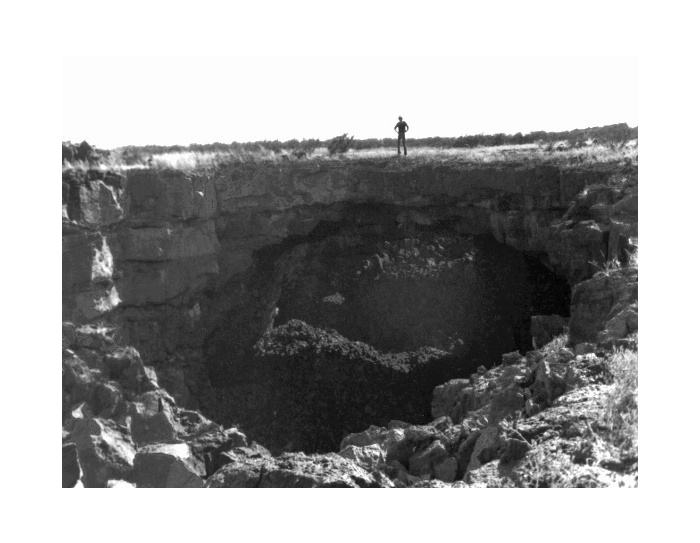 The lava flows are dominantly inflated pahoehoe. A series of partially collapsed lava tubes approximately 1 mile south of the vent complex occur as a disconnected series of sinuous troughs. Because the lava tubes support a substantial colony of bats, the open tubes are a popular site for wild life biologists.  The floors of the Jornada caves are covered with bat droppings and were once commercially mined. A few small wooden structures remain from that operation south of the vent region and at the end of the only road into the volcano's interior. Some of the lava tubes are gigantic. No doubt other lava tubes occur throughout the field that are uncollapsed and undetected.

The Jornada del Muerto flows are an outdoor museum of structures developed from inflation or swelling of the flows from within during flow emplacement. These include mesa-like structures, domical swells, and circular troughs. Based on our understanding of the relatively slow manner in which this particular type of lava flow and its lava tubes are formed, it could be estimated that the complete volcano formed in a time period less than 50 years.

Since the Jornada del Muerto has been sampled and dated, but not mapped, we cannot say with certainty how the unusual vent structure was created. But based on knowledge of some of the ways in which basaltic eruptions occur and my reconnaissance study of the Jornada del Muerto volcano, the vent complex may have started as a lava lake or as an unusual near-vent lava inflation structure. Cooling and draining of the interior of the lava lake or inflation structure during the final stages of the eruption caused the surface to founder and sag. The cinder cone at the north end of the vent complex was probably one of the last events. Ash and cinder eruptions often occur as a final phase, even in eruptions that are on the whole relatively non-explosive.

Panorama of the central vent region of the Jornada del Muerto volcano as seen from the south rim of the vent complex. This view illustrates that the vent region is essentially a shallow basin approximately one half kilometer-wide perched several tens of meters above the surrounding landscape. Photo, L. Crumpler