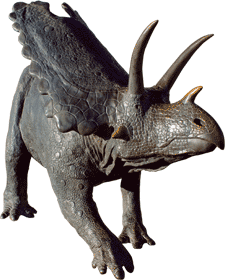 The first dinosaur installed at the Museum entrance was a Pentaceratops, affectionately nicknamed “Spike.”Pentaceratops was a horned dinosaur whose fossils were first discovered in the badlands of northwest New Mexico. About 75 million years ago, this dinosaur would have cropped vegetation from the subtropical swamps near the shore of the Cretaceous sea that covered much of New Mexico. The namePentaceratops means “five-horned face,” and all five can be seen on Spike—one over each eye, one on each cheek and one on the nose. Casts of two Pentaceratops skulls are on display in the New Mexico's Seacoast exhibit. 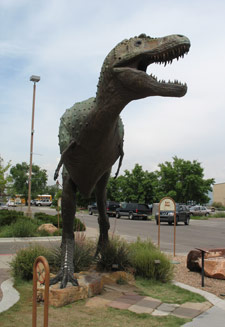 In 1988, Spike was joined by a new dinosaur in front of the Museum. Alberta, a meat-eating Albertosaurus,was sculpted in mid-stride, and placed across the entry courtyard, her head turned to meet Spike's watchful gaze.