The Hall of the Stars

The Hall of Stars is closed until further notice.

Winner of the 2014 Gold MUSE Award for Interpretive Interactive Installations 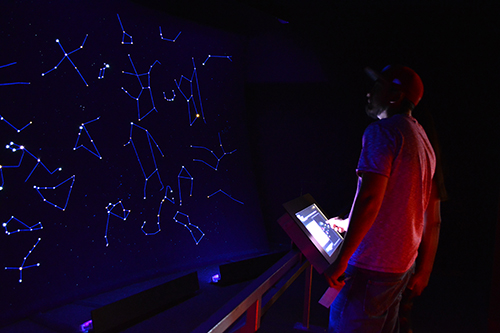 The Hall of the Stars aims to explain how the night sky is organized.  Though the project had some effort from museum employees, it was almost entirely accomplished by museum volunteers and members the professional astronomical community.  This exhibit encourages visitors to explore the sky at their own pace and learn many different astronomical concepts, from the changing of the seasons to types of deep sky objects that they can see from their own backyards.

Rather than just showing the sky visible on any given night of the year, the Hall of the Stars allows visitors to see all of the year’s stars and constellations in the same way that a world map allows them to visualize the whole globe.  The most prominent 39 constellations are quilted onto the tapestry with UV-reactive thread.  By also including the celestial equator and the ecliptic, or the path that the sun takes through the sky, the map demonstrates the changing of the seasons.

The 1,100 commonly-visible stars in the northern night sky are represented by individual LEDs.  358 of these represent the brightest stars of the night sky and are controlled by a program running on the interactive touch screen. The LEDs come in various color temperatures in order to demonstrate the variability of colors and brightness among stars.  110 LEDs represent Messier Objects, which are a collection of famous deep sky objects, including the Pleiades and the Orion Nebula.  These LEDs are green in order to differentiate them from the stars.

The user interface presents information about the tapestry in an intuitive, layered format.  Using it, people can either explore the constellations and stars of the night sky or Messier Objects. 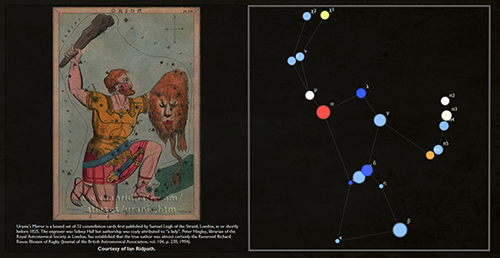 In order to see moveable objects such as the moon and planets that cannot be implemented with fixed-position LEDs, The Sky Tonight is included in the exhibit. The Sky Tonight, a member of the Space Update suite, was developed by Rice University and is available to all museums at a very low cost.