Location:
35°34'05.5"N, 107°10'12.12"W, Cibola County
Type:
Shallow exposures of the surface and near-surface interiors of small basaltic scoria cones
Age:
Late Pliocene;2.5 - 3.0 Ma (similar to the eruptions of the Mount Taylor volcanic field)
Significance:
These volcanic necks are significant because they offer a rare look at the inside of small volcanoes. And they are dramatic and scenic because of their situation within the bright sandstones and shales of the Mesa Verde Group.
Composition:
Mostly alkali basalts, including dark aphanitic "basanites" and xenocrystic basalts. 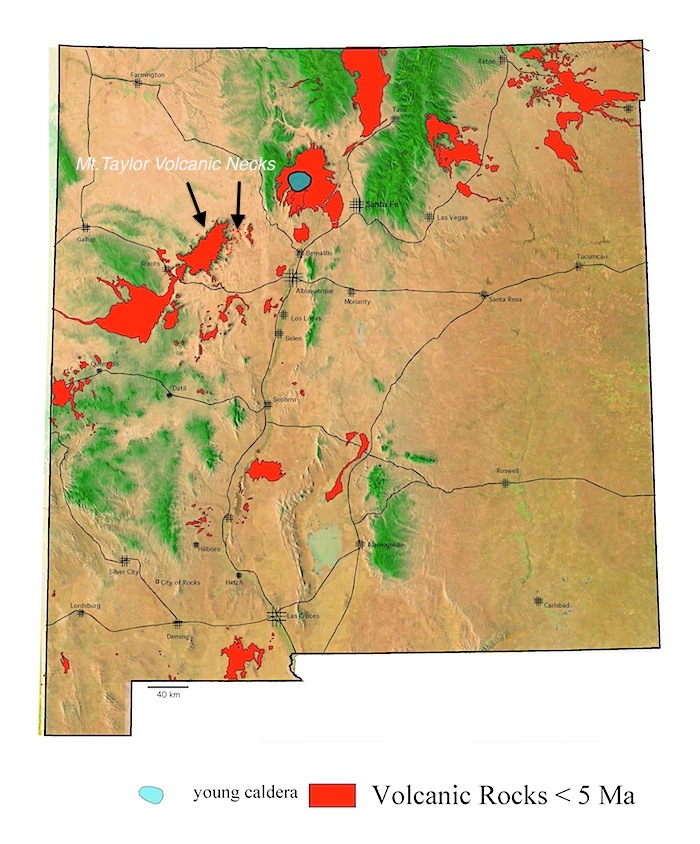 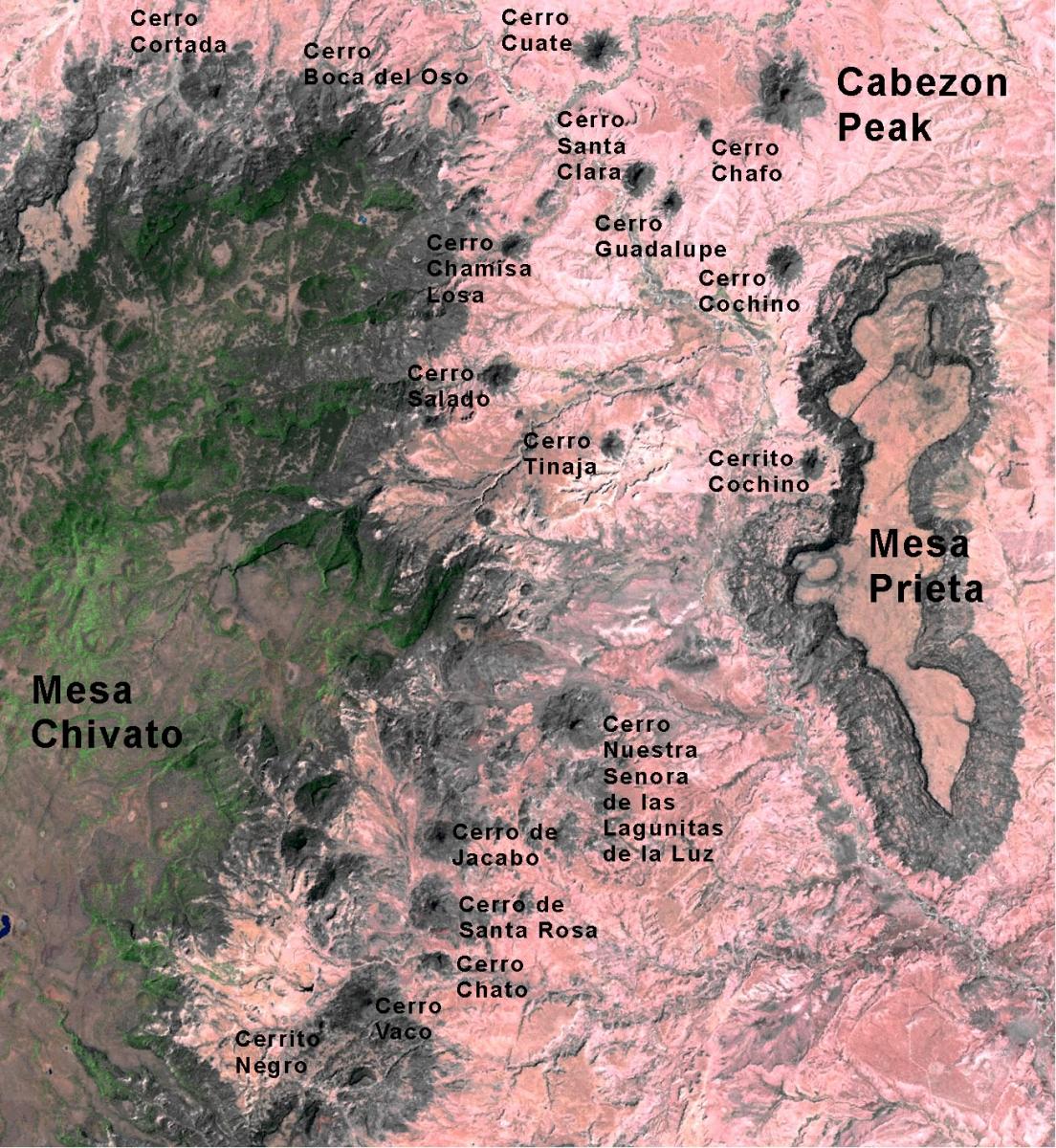 Cabezon Peak is one of many massive dark peaks known as volcanic necks that are scattered throughout the Rio Puerco valley between Mesa Chivato and Mesa Prieta on the west and east, and San Luis and I-40 on the north and south. Together with Mesas Chivato and Prieta they are part of the Mount Taylor volcanic field, a cluster of several hundred small volcanoes. A few volcanic necks, including Cerro Alesna, occur on the west side of Mesa Chivato. Other examples around the south margin of the Mount Taylor field include half-sectioned volcanoes (east Grants Ridge) and deeply dissected volcanoes (Cubero volcano).

There are only a few places where the interiors of young volcanoes are so well exposed as they are in the Rio Puerco valley. The volcanic nnecks  are the near-surface interiors of small volcanoes that are geologically young, yet were deeply dissected when the Rio Puerco cut a valley through the Mount Taylor volcanic field. Backwasting of the lava flows and erosion of the volcanoes themselves has exposed the complex interiors of many of the small volcanoes. One may see results of violent events recorded in their complex structure. The eruptions were similar to those that form small scoria cones, such as Capulin or Bandera volcanoes, and in some cases, similar to eruptions that formed Zuni Salt lake or Kilbourne Hole. 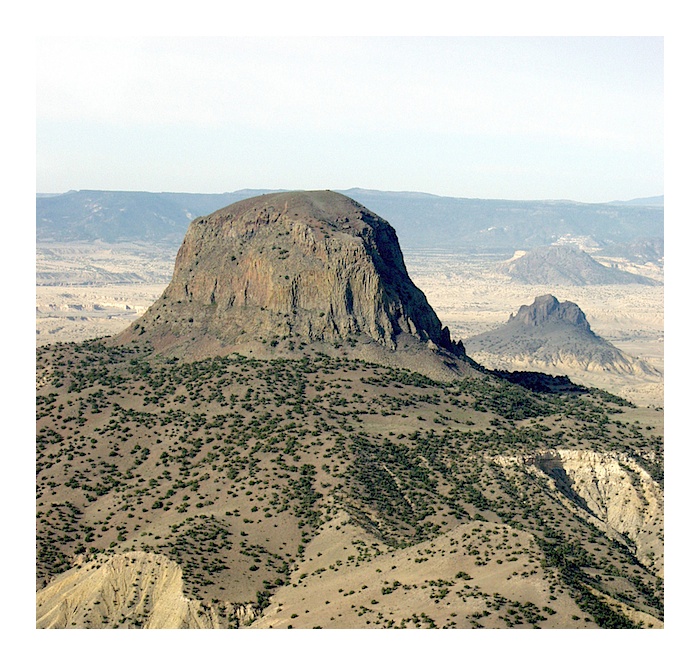 Cabezon Peak.  Behind on the right is Cerro Guadalupe, one of the volcanic necks that appears in the USPS New Mexico State Centennial stamp. Beyond in the skyline is the north end of Mesa Chivato, the preserved surface of the Mount Taylor volcanic field. Photo Jayne Aubele 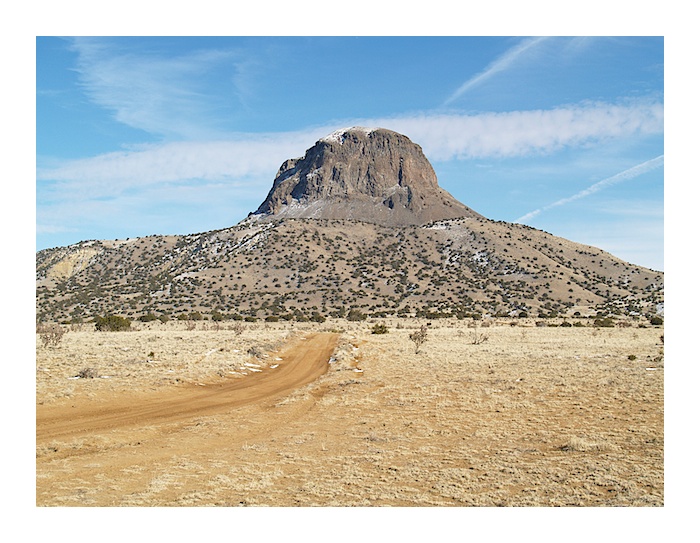 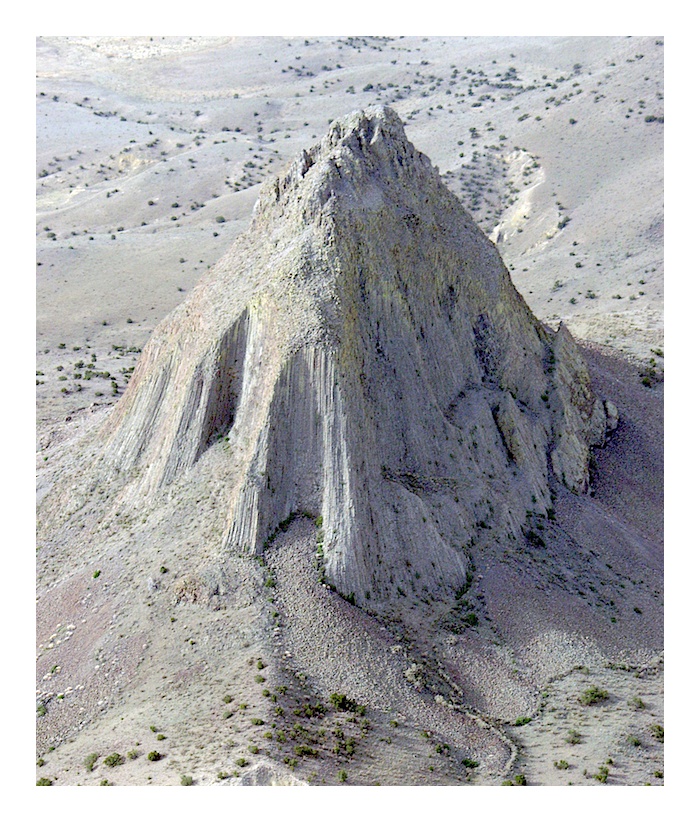 Cerro Alesna is an unusual volcanic neck on the west side of the Mount Taylor volcanic field. Unlike most of the dark and craggy necks in the Rio Puerco valley, Cerro Alesna has huge sweeping massive columns. It consists of an unusual type of volcanic rock, trachyte, benmoreite, or possibly mugearite, rather than the basalt and scoriaceous breccias of the volcanic necks throughout the Rio Puerco valley on the east side of the field. The presence of trachyte, benmoreite, and mugearite, rock types that erupt rather viscously and tend to form large lava domes on Mesa Chivato, makes the Mount Taylor volcanic field really unique and rather odd on the North American continent. Photo L. Crumpler 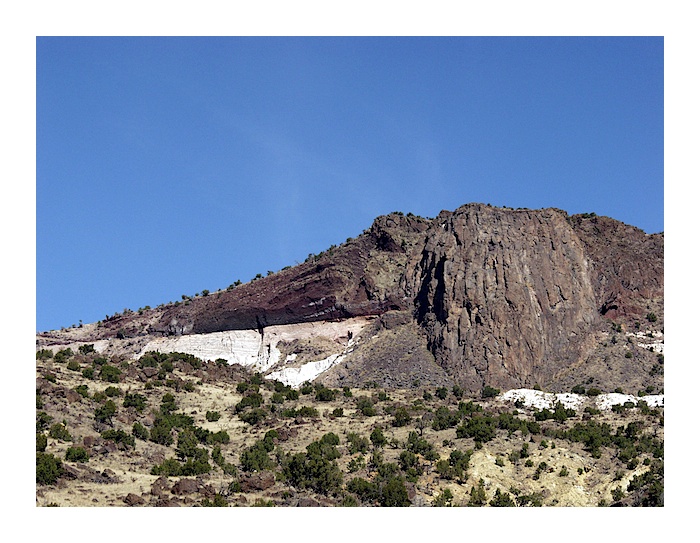 East Grants Ridge is a naturally half-sectioned scoria cone exposed in Lobo Canyon just north and outside of Grants, New Mexico. The cone and its dark scoria sit on top of brilliant white ignimbrites from a nearby earlier rhyolite dome, making it esier to see. The massive basaltic "plug" actually narrows down to a small dike only a meter or two wide at the base of the cliff shown here.  Photo L. Crumpler 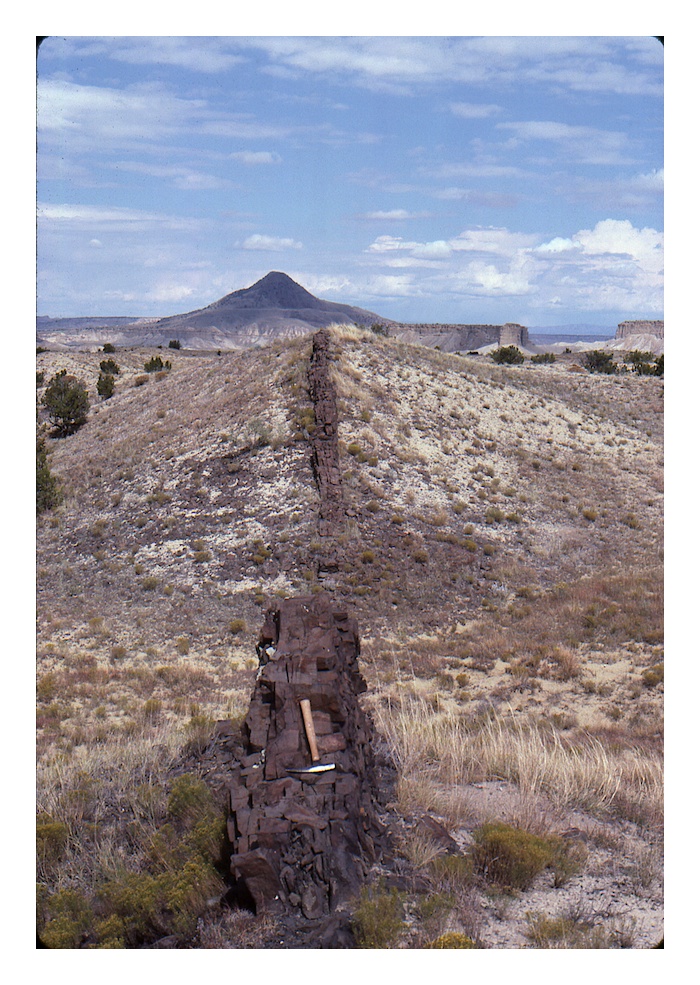 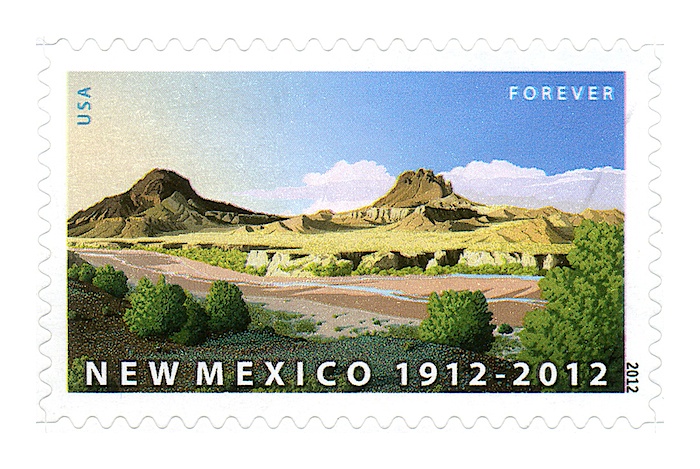 The New Mexico Centennial Stamp (Cerro Santa Clara and Cerro Guadalupe volcanic necks)  Contrary to the official description, Cabezon Peak is no where visible in this scene!  The original painting is a serigraph by silk screen artist Doug West. 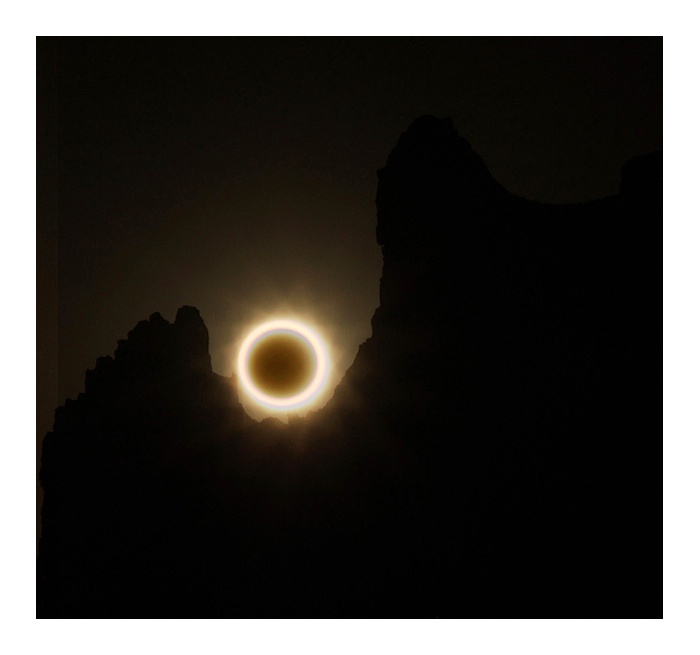 Annular Eclipse, May 20, 2012 as seen through peaks on the flank of Cerro Guadalupe  Photo L. Crumpler

View west toward Boca Oso at the north end of Mesa Chivato. Boca Oso is the "plug" associated with the scoria cone nearly eroded away and forming the adjacent cliffs on the edge of Mesa Chivato. Rio Puerco in the middle ground. Remains of the adobe walls from settlements established in the early 20th century are common throughout the valley. Photo, L. Crumpler 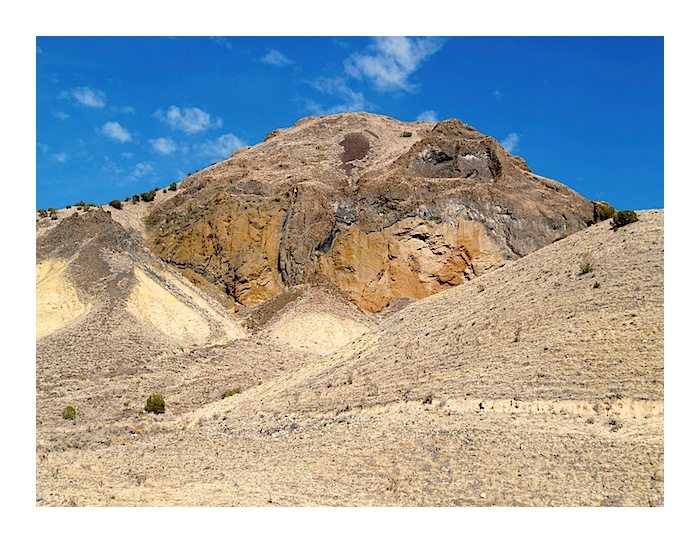 Cerro de Santa Clara (the volcanic neck on the left in the State Centennial stamp above) is a classic exposure. Here one can see a feeding basaltic dike approximately 3 to 4 meters wide cutting vertically through tuff breccias probably deposited in a depression during initial explosive opening phases of the volcanic center. Above these are dark basalt lavas that no doubt subsequently filled in the depression. This view is directed north. Photo L. Crumpler 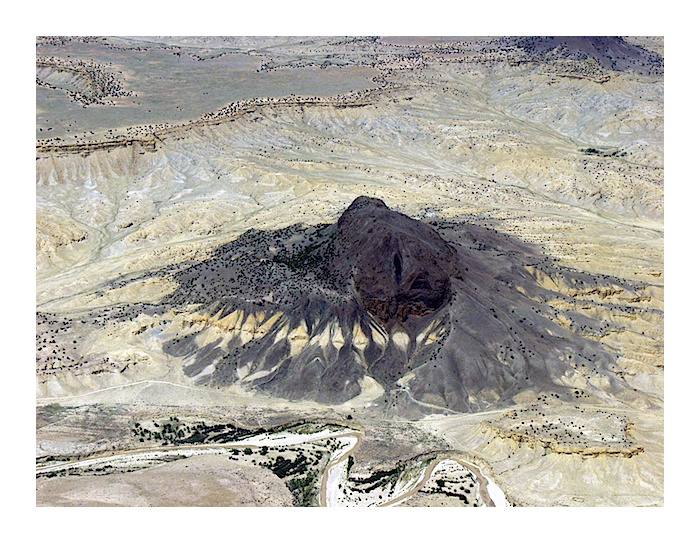 This is an aerial view of essentially the same scene as the photo above. Notice that the volcanic center originally developed without disturbing the pre-existing Cretaceous sediments of the Mesa Verde Group. The Rio Puerco snakes its way past at the bottom of the image. Photo L. Crumpler 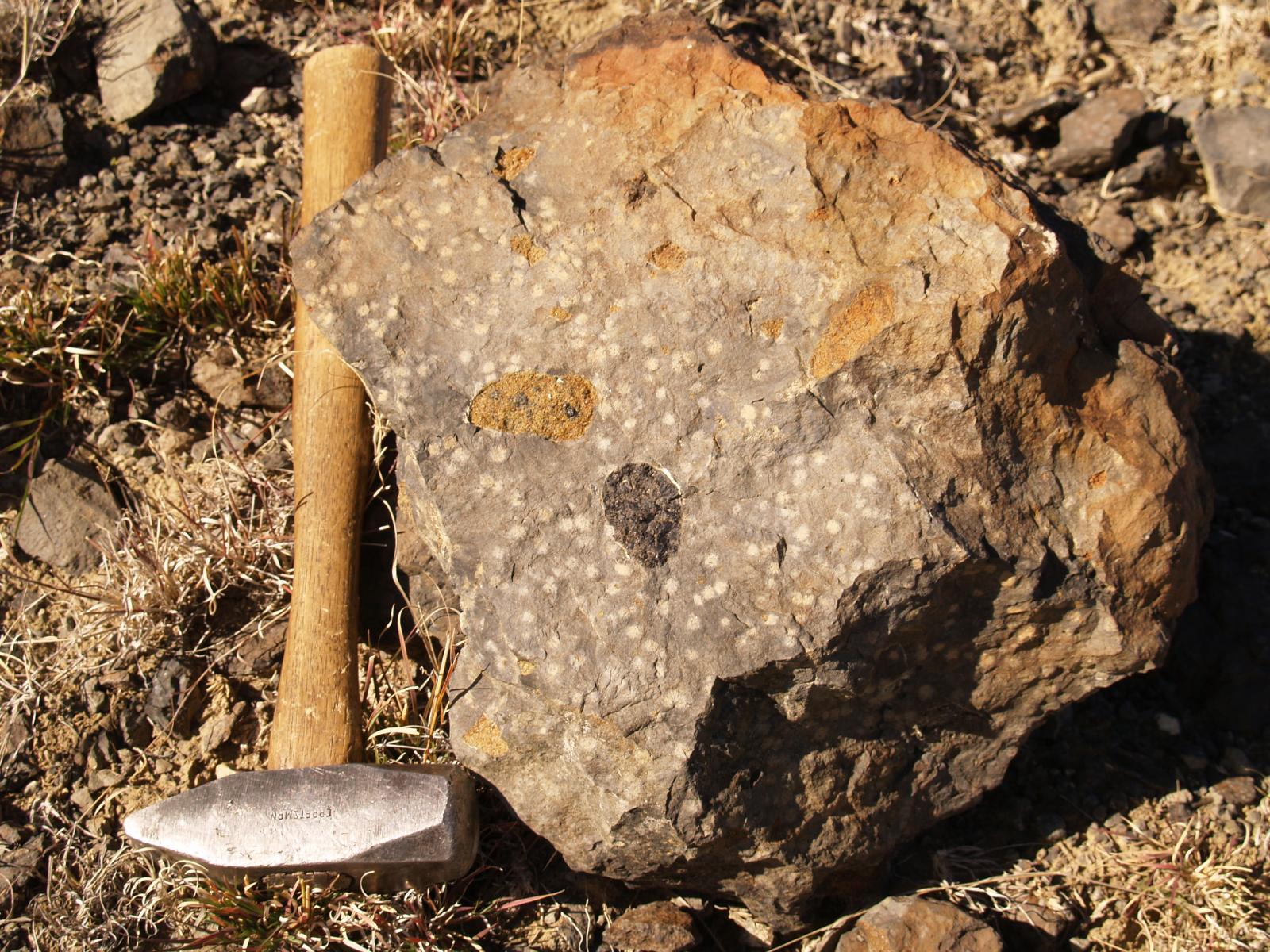 Mantle xenoliths are common in many of the volcanic necks of the Rio Puerco as illustrated by these two, a pyroxenite and a lherzolite, in a block of alkali basalt on the flank of Cerro Guadalupe volcanic neck. The origin of the spotting is unknowm. It is a surface phenomena, not phenocrysts, and is common in basalts throughout the Mount Taylor field and surroundings. 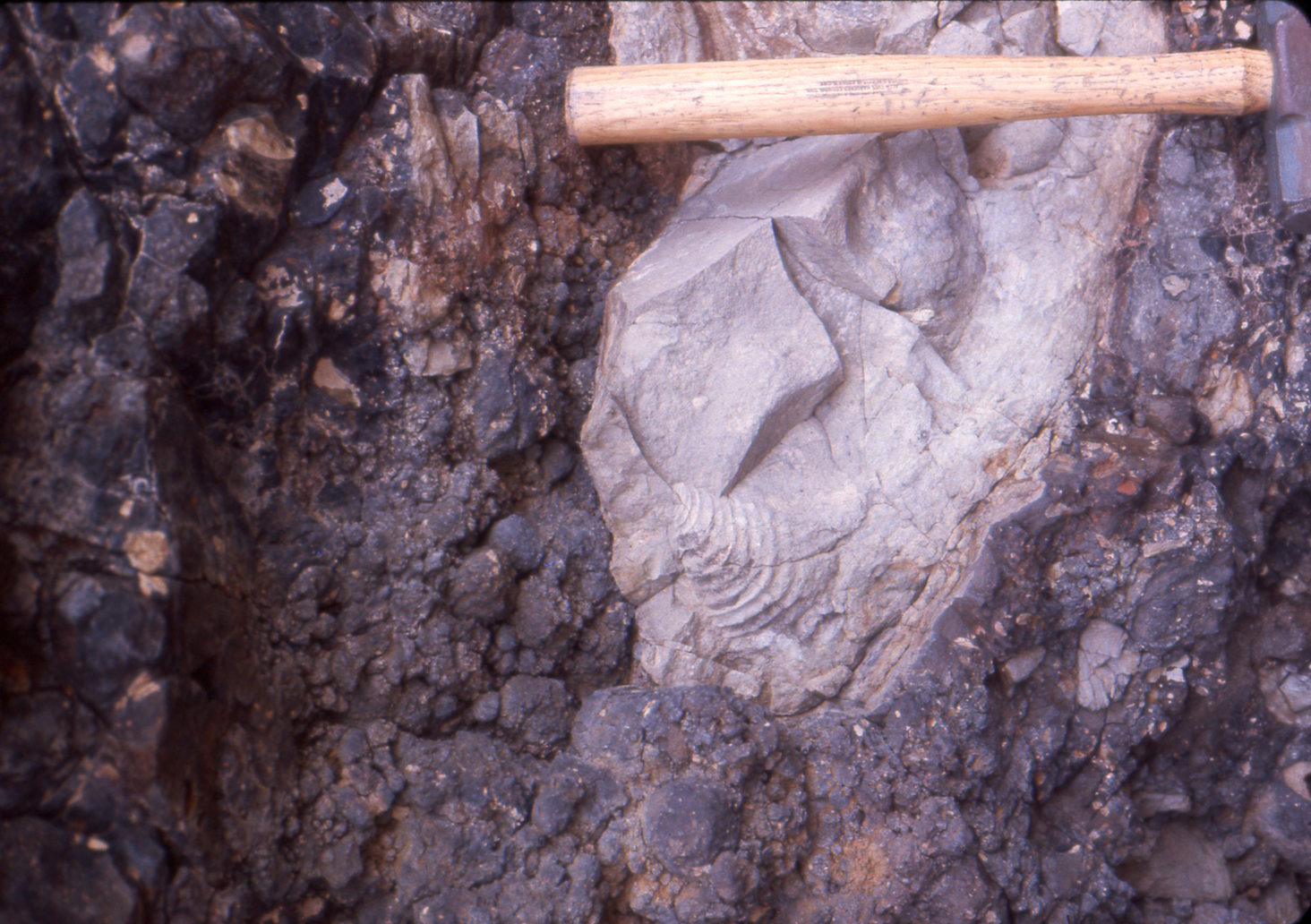 A variety of upper crustal materials are frequently embedded within the basalt and the vent berccias exposed within many of the volcanic necks. Here a fossil shell from the Permian limestone that exists within the upper 1000 m or so has been included within the breccias at Cerro Negro near Seboyeta.

View the  Mt. Taylor Volcanic Necks in a larger map