This chapter compiles classroom and schoolyard-based activities that do not utilize the river model. These activities are grouped under the following topical subheadings: natural history, geology, water, and human influence. Within these activities several essays provide additional in-depth background information on specific topics.

New Mexico is unique in many ways. One of the little-known reasons that it is unique is that it is the site of the Rio Grande Rift which extends from southern Colorado (the San Luis Valley) down the center of our state and into northern Mexico* (see map and diagram on following pages). Much of the landscape, geology, and vegetation of New Mexico is related to the development and location of the rift. The Rio Grande exists because of the rift. Without the rift, there would have been no Rio Grande and no Rio Grande bosque.

The Earth’s crust is actually made up of many huge, separate pieces; geologists call these plates. Plates cover the Earth much like giant puzzle pieces, but they are not static. They move in relation to each other. Two plates can slide past each other, move toward each other causing mountain building or volcanism, or move apart from each other. New Mexico lies within a single plate, the North American plate, but our state has been affected by the movement of plates far away, along the western edge of the continent.

At the end of the Mesozoic Era, many small plates apparently began to crash into the western margin of the North American plate. These plates caused the continent to ripple like a rug being pushed from the edge. Geologists call this type of move- ment compression. The “ripples” became the modern Rocky Mountains, extending from Canada into northern New Mexico. The Sangre de Cristo Mountains in New Mexico are the southernmost expression of the modern Rocky Mountains.

There are only five known young (active or recently active) continental rifts in the world, and the Rio Grande Rift is one of them. A continental rift is a linear area where the crust within a continent is thinning and pulling apart. It is not the boundary of two separate plates, but instead it forms within a plate. It can with time develop into a plate boundary. The other young active continental rifts in the world are: (1) the East African Rift; (2) the Rhine Valley in Germany; (3) the Baikal Rift in Russia; and (4) a recently identified rift beneath the ice in Antarctica. 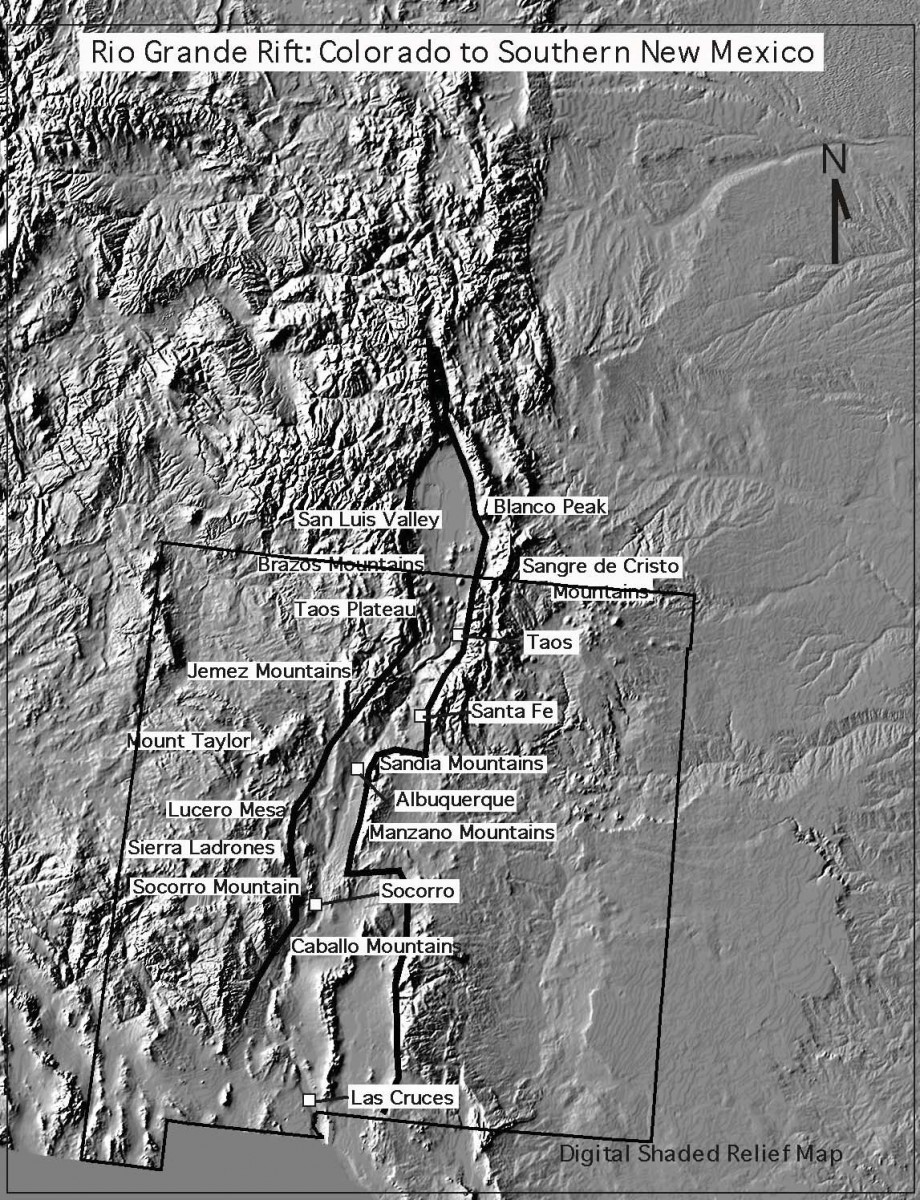 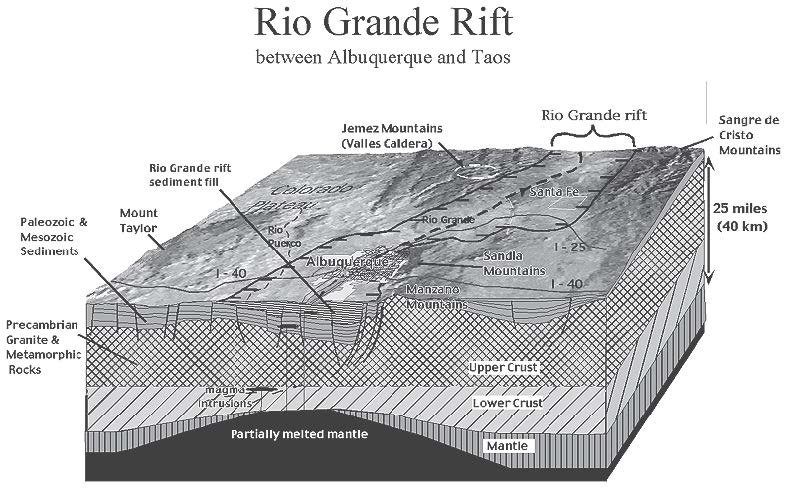 As plates continued to crash into the western edge of the continent, some pieces of plates attached to the edge of the continent. What we now call California was added to this edge. Apparently, at least one plate actually began to move beneath the continent. As this plate traveled from west to east beneath the continent, a wave of volcanic eruptions occurred throughout what would become the western U.S. These volcanic eruptions occurred from 60 to 20 mya and formed the Superstition Mountains in Arizona, the San Juan Mountains in Colorado, and the Mogollon–Black Range–Magdalena–Socorro–Organ Mountain province in New Mexico. Sierra Blanca, the Cerrillos Hills, the Ortiz Mountains, and a volcano that was eventually eroded partially away to form Shiprock also erupted during this time. The “Age of Volcanoes” in New Mexico began during this period and has continued to today.

About 20 mya something happened to the movement of the North American and Pacific plates. There may have been a redistribution or reorientation of their movements, as occasionally happens, and the compression of the North American continent ended. Instead of pushing the continent into mountainous “ripples,” the plate bounding the western edge of the continent began to slide northward along the edge of the continent. This movement continues today and is the cause of the San Andreas fault zone in California. This sliding motion began to tear or pull apart the southwestern region of North America. Geologists call this type of movement tension or shear. As this movement continued, it caused the pulling apart of what is now the southwestern U.S. A series of roughly parallel, north-trending, deep, elongated valleys with intervening mountain ranges were created by this pulling apart of the continent. If you drive through southern Arizona or Nevada today, you see these parallel valleys and mountains in what is called the Basin and Range Province. 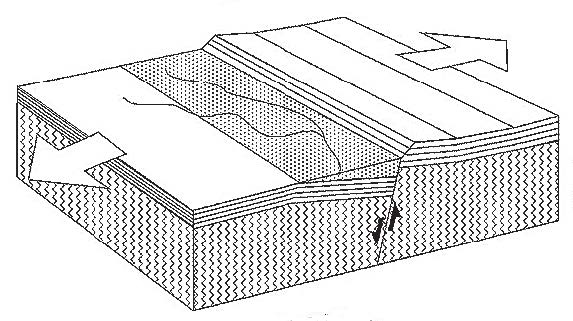 During this time, something strange happened in the Four Corners area of northwestern New Mexico, northeastern Arizona, southeastern Utah and southwestern Colorado. This region, which geologists named the Colorado Plateau, was a shallow circular valley during the Mesozoic Era (Triassic, Jurassic, and Cretaceous Periods) and had layer upon layer of rock units deposited on it in a flat layer-cake sequence. At the end of the Mesozoic Era, when the Rocky Mountains were uplifted, and during the Tertiary Period (60–20 mya), when the extensive volcanism was occurring in the western U.S., very little seemed to affect this region. When the continent began to pull apart 20 mya, the Colorado Plateau still was not affected. It stayed as a stable, layered piece of continental crust, while the rest of the continent broke apart into a series of valleys around it. If you pin a piece of paper to a bulletin board with a single pin and then pull on that piece of paper from one direction, the paper will begin to rotate and tear around the pin. That is what happened to the southwestern North American continent. As the continent began to pull apart and rotate around the Colorado Plateau, valleys were created to the south and west of the plateau, and a large valley began to form east of it. This “valley” is the Rio Grande Rift. 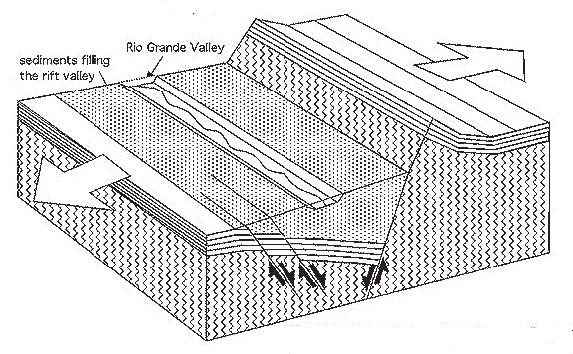 A geological rift forms by the pulling apart and thinning of the Earth’s crust. You can think about it as though it was pie crust or pizza dough rolled out with a rolling pin and then pulling apart from both sides. If you have ever done this with dough, you know that it does not break in a straight line down the center. Instead, it breaks apart in a series of oval openings that occur as you continue to pull and the dough thins and breaks. This is exactly the way the Earth’s crust responds to tension. In fact, the Rio Grande Rift has formed as a series of oval basins or depressions, outlined by faults, that extend in a slightly offset line from southern Colorado to northern Mexico. The escarpment known as La Bajada, between Santa Fe and Albuquerque, forms a margin between two of these basins. The city of Albuquerque was built on top of the eroded debris filling one rift basin to the south of La Bajada, and the city of Santa Fe was built in the basin to the north of La Bajada. A similar situation has occurred just south of Socorro.

As the basins began to form, the continental crust thinned and dropped down to form low areas. Thinner crust meant that it was easier for magma to reach the surface, so volcanoes began to erupt in the center of the rift. Volcanoes from Taos to Carrizozo erupted. In many places, such as west of Albuquerque or Los Lunas, these volcanoes form alignments that are called “fissure vents” where many small volcanoes erupt in a line. In the Albuquerque area, the width of the rift extends from the Sandia Mountains to the Rio Puerco, with the Albuquerque volcanoes right in the center of the rift.

The series of cracks in the crust at the edges of the rift, called bound- ary faults, became very complex. Some of the margins of the rift began to be uplifted into the modern central mountains of New Mexico, including the Sandia, Manzano, Manzanita, and Sierras de los Pinos Mountains. The Sandia Mountains near Albuquerque probably began to rise only 5–10 mya, making them geologically young and NOT part of the Rocky Mountains. The Rio Grande Rift and the mountains that form the rift’s margins continue to be geologically active today.

The series of rift basins, with uplifted margins, formed a perfect low area for water to flow. As water runoff began to form in northern mountains, such as the San Juans, the water began to integrate into a permanent through-going river that took advantage of the low area. Most geologists believe that the Rio Grande formed as a major river 1–2 mya.

Most river valleys are eroded or cut by the rivers that flow within them. Unlike most rivers, the ancestral Rio Grande did not erode the broad, flat valley through which it now flows; it simply took advantage of this linked series of basins or low areas.